Solitary Expressions — Red Wedge. “I had to drink this beer to get the taste of the cell out of my mouth,” Brian said, raising his bottle to the audience. 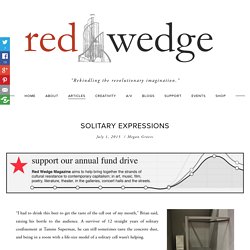 A survivor of 12 straight years of solitary confinement at Tamms Supermax, he can still sometimes taste the concrete dust, and being in a room with a life-size model of a solitary cell wasn’t helping. Brian went on to say that though his nametag said he was a “survivor” of solitary, he doesn’t feel like he has survived. More than four years after leaving his cell, he said, “not a day goes by that it’s not in my head.” The crowded room was quiet, and Brian’s eyes were wet as he talked. How systemic racism entangles all police officers — even black cops. Neill Franklin is a black man. 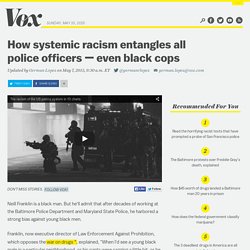 But he'll admit that after decades of working at the Baltimore Police Department and Maryland State Police, he harbored a strong bias against young black men. Franklin, now executive director of Law Enforcement Against Prohibition, which opposes the war on drugs, explained, "When I'd see a young black male in a particular neighborhood, or his pants were sagging a little bit, or he walked a certain way … my first thoughts were, 'Oh, I wonder if he's selling drugs.'" As the media has increased its scrutiny of police killings of black men, some of the cases have involved black police officers.

In the case of Freddie Gray in Baltimore, for example, three of the six police officers charged for Gray's death are black. How systemic racism entangles all police officers — even black cops. Charged with same crime, Iowa paper shows black suspects’ mug shots but whites get yearbook pics. An Iowa newspaper is accused of pro-white bias after it handled the same alleged crime between two different sets of suspects in radically different ways. 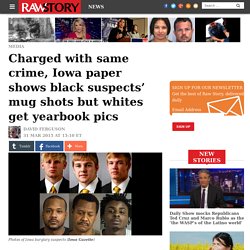 Blogger Rafi D’Angelo at SoLetsTalkAboutIt.com pointed out that in reports filed on successive days, the The Gazette in Cedar Rapids printed mug shot photos of black burglary suspects and yearbook photos for white burglary suspects. On March 23, the Gazette‘s Lee Hermiston reported that three University of Iowa wrestlers were arrested after being caught in possession of several items that had been stolen from local homes in Marion, Iowa.

The three suspects — Ross Lembeck, Seth Gross and Logan Ryan, all 19 and all white — were shown in the Gazette‘s pages in the their freshman yearbook pictures, wearing matching coats and ties. According to the Gazette, “The three wrestlers were charged with possessing alcohol under the legal age. A Former Sex Slave’s Terrifying Ordeal: 'As Soon as He Put the Blindfold On, I Knew Something Was Wrong' I met Jill Brenneman in 2011 at a conference for sex workers in Asheville, North Carolina. 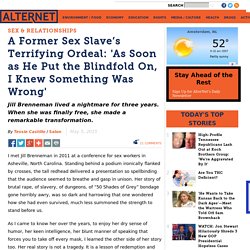 Looting vs. Finding - Hurricane Katrina Photo Captions. Going-without-water-in-detroit. Photo DETROIT — A FAMILY of five with no water for two weeks who were embarrassed to ask friends if they could bathe at their house. 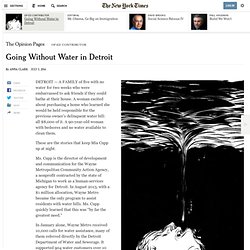 A woman excited about purchasing a home who learned she would be held responsible for the previous owner’s delinquent water bill: all $8,000 of it. A 90-year-old woman with bedsores and no water available to clean them. These are the stories that keep Mia Cupp up at night. Ms. In January alone, Wayne Metro received 10,000 calls for water assistance, many of them referred directly by the Detroit Department of Water and Sewerage. Detroit borders the Great Lakes system, containing 21 percent of the world’s surface freshwater. The average monthly water bill in Detroit is $75 for a family of four — nearly twice the United States average — and the department is increasing rates this month by 8.7 percent.

Punishing survivors. Earlier this week, the Daily News reported that a Cowlitz County, Washington survivor of an alleged kidnapping and sexual assault, perpetrated by her ex-boyfriend and an accomplice, was jailed when she refused to cooperate with the prosecutors on the case. 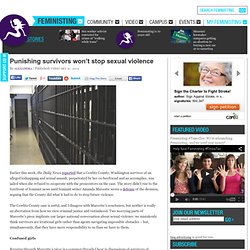 The story didn’t rise to the forefront of feminist news until feminist writer Amanda Marcotte wrote a defense of the decision, arguing that the County did what it had to do to stop future violence. The Cowlitz County case is awful, and I disagree with Marcotte’s conclusion, but neither is really an aberration from how we view criminal justice and victimhood. Two worrying parts of Marcotte’s piece implicate our larger national conversation about sexual violence: we mistakenly think survivors are irrational girls rather than agents navigating impossible obstacles – but, simultaneously, that they have more responsibility to us than we have to them. Confused girls.

Cops steal from poor hispanics. Bp brutality. WASHINGTON — Border Patrol agents have deliberately stepped in the path of cars apparently to justify shooting at the drivers and have fired in frustration at people throwing rocks from the Mexican side of the border, according to an independent review of 67 cases that resulted in 19 deaths. 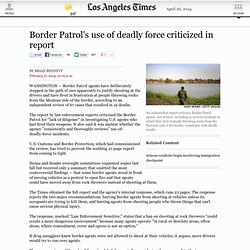 The report by law enforcement experts criticized the Border Patrol for "lack of diligence" in investigating U.S. agents who had fired their weapons. It also said it was unclear whether the agency "consistently and thoroughly reviews" use-of-deadly-force incidents. U.S. Customs and Border Protection, which had commissioned the review, has tried to prevent the scathing 21-page report from coming to light. The Times obtained the full report and the agency's internal response, which runs 23 pages. If drug smugglers knew border agents were not allowed to shoot at their vehicles, it argues, more drivers would try to run over agents. Shawn P. The internal report does not detail specific shooting incidents.