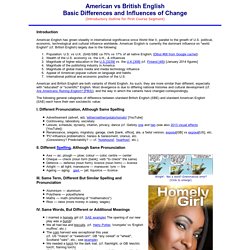 Grammatical error? (Click to enlarge) Note this 'homely' girl on a British book ... ...compared with this quotation from U.S. journalist H.L. Mencken (1880-1956) Counting in American English; notice the absence of 'milliard' (as used in SBE) A 'thousand million' — a term coined to avoid confusing international audiences — is the same amount in SAE and SBE. Advanced Grammar in Use 3rd edition. Definite article: the. The definite article the is the most frequent word in English. 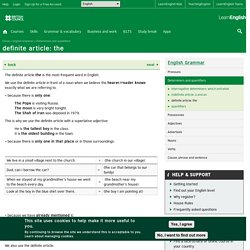 We use the definite article in front of a noun when we believe the hearer/reader knows exactly what we are referring to. • because there is only one: The Pope is visiting Russia.The moon is very bright tonight.The Shah of Iran was deposed in 1979. This is why we use the definite article with a superlative adjective: He is the tallest boy in the class. . • because there is only one in that place or in those surroundings: • because we have already mentioned it: A woman who fell 10 metres from High Peak was lifted to safety by a helicopter. We also use the definite article: • to say something about all the things referred to by a noun: The wolf is not really a dangerous animal (= Wolves are not really dangerous animals) The kangaroo is found only in Australia (= Kangaroos are found only in Australia) The heart pumps blood around the body. (= Hearts pump blood around bodies) • to refer to a system or service: • newspapers: • organisations:

David Heathfield. Essay Punch Online: An Interactive Writing Tutorial. Vowel Sounds. 10 unusual expressions in English. Part of the fun of learning a language is getting to know its idioms and expressions, but there are many whose meaning is far from clear and whose origins are obscure. 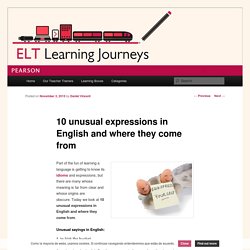 Today we look at 10 unusual expressions in English and where they come from. 1. to kick the bucket A euphemism for ‘to die’. One theory suggests it comes from the days when prisoners were executed by hanging. An upturned bucket, or some other kind of pedestal, would be placed under their feet as they were strung up to the gallows and then kicked away to make them drop. A: I’d love to travel around the world one day.B: So would I. 2. It might surprise you, but this expression is used to wish someone good luck. A: Ready for your presentation? 3. to have two left feet The meaning of this expression is fairly transparent. It’s really embarrassing at parties when my boyfriend hits the dance floor. 4. to make a (right) pig’s ear of something Poor old pigs – they’re not renowned for their good looks. 5. to have a butcher’s.