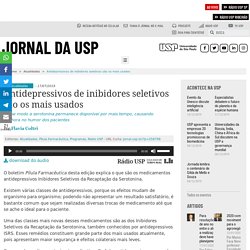 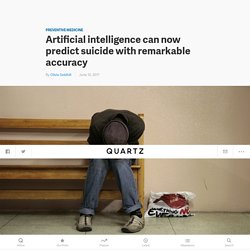 Colin Walsh, data scientist at Vanderbilt University Medical Center, hopes his work in predicting suicide risk will give people the opportunity to ask “what can I do?” While there’s still a chance to intervene. Walsh and his colleagues have created machine-learning algorithms that predict, with unnerving accuracy, the likelihood that a patient will attempt suicide. In trials, results have been 80-90% accurate when predicting whether someone will attempt suicide within the next two years, and 92% accurate in predicting whether someone will attempt suicide within the next week. A mudança radical de personalidade de uma pessoa com 14 e 77 anos - Nexo Jornal. Não foi encontrada uma correlação expressiva entre os traços de personalidade de uma mesma pessoa na adolescência e velhice. 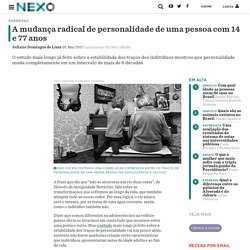 Interactive Sex Questionnaire for Couples. Interviews with serial killers. Cognitive Neuroscience in Education. Ask for Someone’s Opinion to Kickstart a Conversation. Creatures of Habit: How Neurons Weigh Behavioral Cost and Reward. We are creatures of habit, nearly mindlessly executing routine after routine. 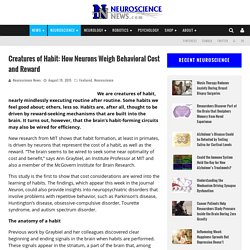 Some habits we feel good about; others, less so. Habits are, after all, thought to be driven by reward-seeking mechanisms that are built into the brain. It turns out, however, that the brain’s habit-forming circuits may also be wired for efficiency. New research from MIT shows that habit formation, at least in primates, is driven by neurons that represent the cost of a habit, as well as the reward. “The brain seems to be wired to seek some near optimality of cost and benefit,” says Ann Graybiel, an Institute Professor at MIT and also a member of the McGovern Institute for Brain Research. This study is the first to show that cost considerations are wired into the learning of habits. The anatomy of a habit Previous work by Graybiel and her colleagues discovered clear beginning and ending signals in the brain when habits are performed.

In addition, these habitual eye-scanning patterns became more efficient. Worrying-about-stuff-is-a-sign-of-intelligence. The tendency to worry about stuff could be a sign of a certain kind of intelligence, according to a paper in an upcoming edition of the journal Personality and Individual Differences (hat tip to Christian Jarrett at the British Psychology Society's Research Digest for spotting it first). 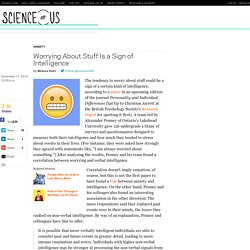 A team led by Alexander Penney of Ontario's Lakehead University gave 126 undergrads a litany of surveys and questionnaires designed to measure both their intelligence and how much they tended to stress about events in their lives. What it means to "hold space" for people, plus eight tips on how to do it well - Heather Plett. When my mom was dying, my siblings and I gathered to be with her in her final days. 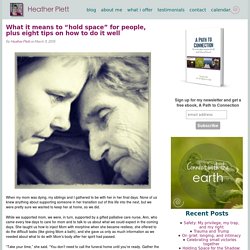 None of us knew anything about supporting someone in her transition out of this life into the next, but we were pretty sure we wanted to keep her at home, so we did. While we supported mom, we were, in turn, supported by a gifted palliative care nurse, Ann, who came every few days to care for mom and to talk to us about what we could expect in the coming days. She taught us how to inject Mom with morphine when she became restless, she offered to do the difficult tasks (like giving Mom a bath), and she gave us only as much information as we needed about what to do with Mom’s body after her spirit had passed.

“Take your time,” she said. “You don’t need to call the funeral home until you’re ready. Ann gave us an incredible gift in those final days. 5 Surefire Ways to Kill a Relationship. It’s true enough that, day to day, all couples disagree and fight but research makes clear that it’s how we fight, and how often, that matters. 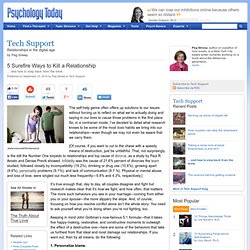 The more such behaviors you see in your marriage—coming from either you or your spouse—the more slippery the slope. And, of course, focusing on how you resolve conflict alone isn’t the whole story: You need to ask yourself what you’re doing when you’re not fighting, too. Keeping in mind John Gottman’s now-famous 5:1 formula—that it takes five happy-making, restorative, and constructive moments to outweigh the effect of a destructive one—here are some of the behaviors that take us furthest from that ideal and most damage our relationships. If you want out, then by all means, do the following: 1. The Psychology of Music. Jdm15923a. Why You Should Be Sleeping in the Nude. Como flechar o coração de todos aqueles que conhecer. Psychology studies relevant to everyday life from PsyBlog. 10 Best-Ever Anxiety-Management Techniques. 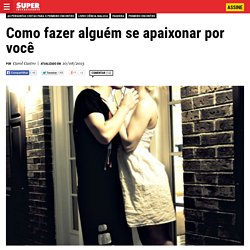 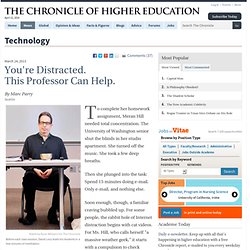 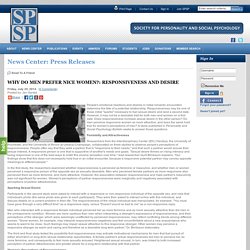 Responsiveness may be one of those initial "sparks" necessary to fuel sexual desire and land a second date. However, it may not be a desirable trait for both men and women on a first date. Does responsiveness increase sexual desire in the other person? Do men perceive responsive women as more attractive, and does the same hold true for women's perceptions of men? How to Deal with Chronic Complainers.