Disaster for Theresa May as legal ruling brings student deportations to a halt. The ruling could hardly be more damning. 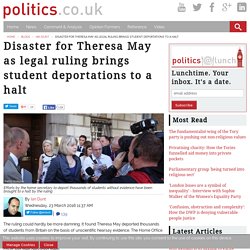 It found Theresa May deported thousands of students from Britain on the basis of unscientific hearsay evidence. The Home Office behaved like a tin-pot dictatorship: detaining innocent people, accusing them of made-up charges without providing anything to back it up, denying them their day in court and then deporting them. Did Labour over-spend? - BBC News. Members of the Question Time audience became conspicuously grumpy when Ed Miliband said the last Labour government did not over-spend. 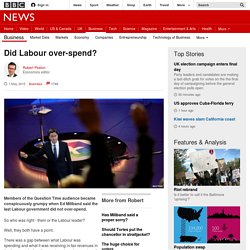 So who was right - them or the Labour leader? Well, they both have a point. There was a gap between what Labour was spending and what it was receiving in tax revenues in the few years before the great crash and recession of 2008. But that gap was not massive: sometimes it was a tiny bit bigger than the growth rate of the economy, sometimes a bit smaller; which means there was no significant increase in the ratio of public sector debt to national income or GDP. Thus in 2007-8, public spending was 40.2% of GDP, compared with tax revenues that were 37.5% of GDP: so the deficit was 2.7% of GDP. No shouting. Labour overspending did not trigger financial crash, says senior civil servant.

The permanent secretary to the Treasury, Sir Nicholas Macpherson, has argued that the 2008 financial crisis was “a banking crisis pure and simple”, contradicting Conservative claims that it was caused by Labour overspending. 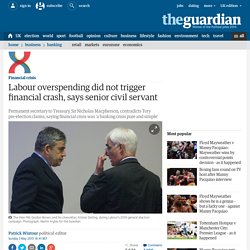 His surprising remarks come after Ed Miliband came under pressure on a leader’s question time debate last week that Labour government had overspent, a view strengthened by the now notorious letter left by the former treasury chief secretary Liam Byrne to his successor in 2010 that there was “no money left”. In a largely challenging review of Mr Osborne’s Economic Experiment, a book by the Observer economics columnist William Keegan, Macpherson wrote: “Some of Keegan’s book resonates. The BBC's dumb public: a view from Greece. The BBC’s ‘election worm’. 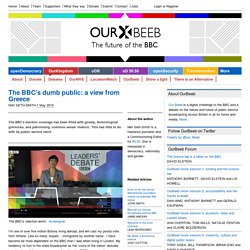 Screengrab. I’m one of over five million Britons living abroad, and will cast my postal vote from Athens. Like so many ‘expats’ - immigrants by another name - I have become far more dependent on the BBC than I was when living in London. Paul Krugman - The austerity delusion. As Oxford’s Simon Wren-Lewis noted, on the very same day that the Centre for Macroeconomics revealed that the great majority of British economists disagree with the proposition that austerity is good for growth, the Telegraph published on its front page a letter from 100 business leaders declaring the opposite. 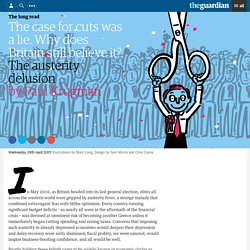 Why does big business love austerity and hate Keynesian economics? After all, you might expect corporate leaders to want policies that produce strong sales and hence strong profits. I’ve already suggested one answer: scare talk about debt and deficits is often used as a cover for a very different agenda, namely an attempt to reduce the overall size of government and especially spending on social insurance. This has been transparently obvious in the United States, where many supposed deficit-reduction plans just happen to include sharp cuts in tax rates on corporations and the wealthy even as they take away healthcare and nutritional aid for the poor. Why this weakness? IMF: Austerity is much worse for the economy than we thought. Earlier this week, the International Monetary Fund made a striking admission in its new World Economic Outlook. 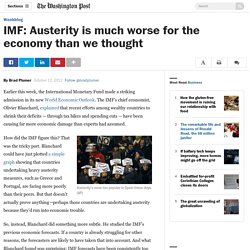 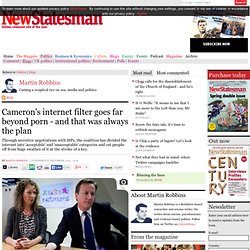 What activists actually called for - and ISPs were forced to provide - is an 'objectionable content' filter, and there is a vast, damp and aching chasm between the two. The language of the mythical 'porn filter' is so insidious, so pervasive, that even those of us opposed to it have been sucked into its slippery embrace. And so even when it turns out that O2 are blocking the Childline and Refuge websites, or that BT are blocking gay and lesbian content, we tend to regard them as collateral damage – accidental victims of a well-meaning (if misguided) attempt to protect out children from the evils of cock. UK Politics - Tories 'to match Labour spending' 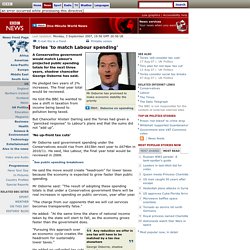 He pledged two years of 2% increases. The final year total would be reviewed. He told the BBC he wanted to see a shift in taxation from income being taxed to pollution being taxed.