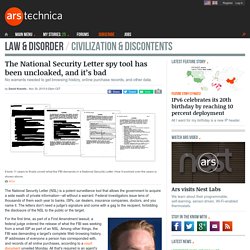 Federal investigators issue tens of thousands of them each year to banks, ISPs, car dealers, insurance companies, doctors, and you name it. These Anti-Surveillance Tools Will Protect Activists and Their Privacy. When it comes to protest, police and law enforcement agencies are always equipped with weapons and the latest electronic devices but the activists and protestors rely on little more than sign boards and smartphones. 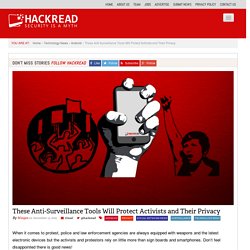 Don’t feel disappointed there is good news! There are several tools out there that can be handy in order to protect privacy and record whatever is happening around you. Mass Surveillance Isn’t the Answer to Fighting Terrorism. The NSA Stopped Spying on Americans Last Night... Just Kidding. Claire BernishNovember 30, 2015. 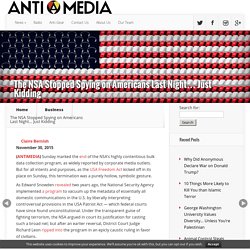 Snowden, Assange and Manning statues unveiled in Berlin. "The sculptures represent three contemporary heroes who have lost their freedom for the truth. 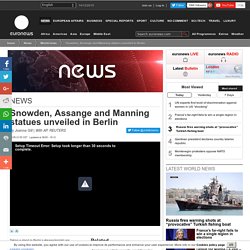 " Taking a stand in Berlin’s Alexanderplatz are whistleblowers Chelsea Manning, Julian Assange and Edward Snowden. The NSA's bulk metadata collection authority just expired. What now? The language in the US Justice Department statement is far from inspiring, written in bland legalese, but it still represents an important victory for the whistleblower Edward Snowden. 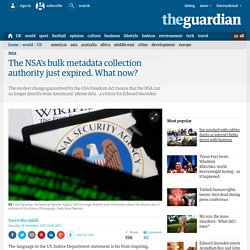 The statement, dated 28 November 2015, says: “Final temporary reauthorization of the Section 215 bulk telephony metadata data program in the US expires.” What that means is that from Saturday, the National Security Agency will no longer directly hold information about the phone calls of millions of US citizens. The USA Freedom Act, passed in the summer, allowed the NSA a 180-day transition period to sort out arrangements. The Latest Snowden Revelation Is Dangerous for Anonymous — And for All of Us ... The latest Snowden-related revelation is that Britain’s Government Communications Headquarters (GCHQ) proactively targeted the communications infrastructure used by the online activist collective known as Anonymous. 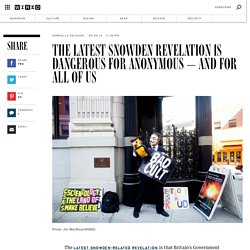 Specifically, they implemented distributed denial-of-service (DDoS) attacks on the internet relay chat (IRC) rooms used by Anonymous. They also implanted malware to out the personal identity details of specific participants. And while we only know for sure that the U.K.’s GCHQ and secret spy unit known as the “Joint Threat Research Intelligence Group” (JTRIG) launched these attacks in an operation called “Rolling Thunder,” the U.S.’ NSA was likely aware of what they were doing because the British intelligence agents presented their program interventions at the NSA conference SIGDEV in 2012. (Not to mention the two agencies sharing close ties in general.) It’s No Secret That the Government Uses Zero Days for “Offense” Little by little, the government is opening up about its use of computer security vulnerabilities. 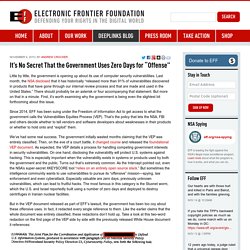 Last month, the NSA disclosed that it has historically “released more than 91% of vulnerabilities discovered in products that have gone through our internal review process and that are made and used in the United States.” There should probably be an asterisk or four accompanying that statement. But more on that in a minute. NSA claims it shares 91% of security flaws with its manufactures. NSA discloses 91 percent of the zero-day bugs it finds in the online systems to its manufacturers while it keeps the 9 percent to itself. 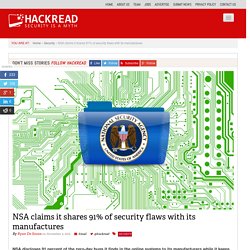 This information was disclosed to defend the agency’s bug disclosure policies, according to reports from Reuters. NSA has been heavily criticized since Snowden‘s leaks and many questions have been posed to the United States government on the activities of the agency. One such thing is NSA’s bug disclosure policy. Snowden Vindicated as Judge Shuts Down NSA Bulk Spying in Epic Smackdown. Claire BernishNovember 10, 2015 (ANTIMEDIA) Washington, D.C. — On Monday, a federal judge ordered a halt to the NSA’s bulk metadata collection program in a reiteration and confirmation of a previous ruling that found the practice “unconstitutional” — and even “Orwellian.” 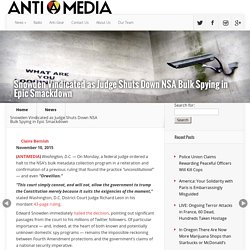 “This court simply cannot, and will not, allow the government to trump the Constitution merely because it suits the exigencies of the moment,” stated Washington, D.C. District Court Judge Richard Leon in his mordant 43-page ruling. Edward Snowden immediately hailed the decision, pointing out significant passages from the court to his millions of Twitter followers.

US. Government Funded Your Favorite 'NSA-Proof' Apps. Top 5 Encrypted Messaging Softwares AnonHQ. Cyber Security If you found out that someone has been watching you the entire time how would you feel, reading every incoming-outbound messages from your cell phone and computer? 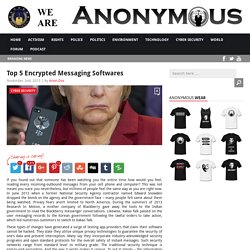 This was not meant you scare you nevertheless, but millions of people feel the same way as you are right now. In June 2013 when a former National Security Agency contractor named Edward Snowden dropped the bomb on the agency and the government face – many people felt same about them being watched. Privacy fears aren’t limited to North America. Surveillance Planes With Thermal Imaging Used to Spy on American People. Derrick BrozeNovember 2, 2015 (ANTIMEDIA) New internal documents from the Federal Bureau of Investigation reveal that surveillance planes the agency flew over Baltimore and Ferguson during highly-publicized protests also operated thermal imaging equipment.

The documents, obtained by the American Civil Liberties Union via Freedom of Information Act requests, outline how the bureau is using planes equipped with infrared and night vision cameras. They also reveal that the FBI retains the videos for an unspecified length of time. The release of the documents comes just days after FBI Director James Comey confirmed to Congress that the agency flew surveillance aircraft over Ferguson, Missouri, and Baltimore during the protests following the police killings of Michael Brown and Freddie Gray.

USA Freedom Act: Before Snowden, librarians were the anti-surveillance heroes. Photo by Justin Sullivan/Getty Images June began with a sunset. One of the most controversial provisions of the notorious post-9/11 Patriot Act expired. Now, a mechanism used for more than a decade to justify the bulk collection Americans' phone and other “business records” is no longer a part of U.S. law. Specifically, the section of the Patriot Act that expired is Section 215, which is commonly nicknamed the “library records provision,” because it called on librarians to hand over patron reading and computer records when requested by law enforcement under a Section 215 request. 6 Spooky Ways Local Law Enforcement Is Watching You. 6 Reasons Why You Need to Pick Up the Phone Right Now and Tell Your Rep to Op...

Washington, DC — On Tuesday, the Senate passed one of the most damning blows to your privacy in the history of the police state. With a vote of 74-21 your elected leaders decided that your already intrusive government needs more help to spy on you. The Cybersecurity Information Sharing Act (CISA) now moves to a conference committee despite its inability to address problems that caused recent highly publicized computer data breaches, like unencrypted files, poor computer architecture, un-updated servers, and employees (or contractors) clicking malware links. Tumblr_ncb4imZ63t1qz736so1_500. Security Agencies Eager to Get Hold of User Data: Microsoft's Transparency Re... Microsoft announced the launch of a new transparency website in order to provide free access to the transparency reports published by the firm. Trapwire surveillance system exposed in document leak.

It sounds like something from the film Minority Report: a CCTV surveillance system that recognises people from their face or walk and analyses whether they might be about to commit a terrorist or criminal act. But Trapwire is real and, according to documents released online by WikiLeaks last week, is being used in a number of countries to try to monitor people and threats. Founded by former CIA agents, Trapwire uses data from a network of CCTV systems and numberplate readers to figure out the threat level in huge numbers of locations. That means security officials can "focus on the highest priorities first, taking a proactive and collaborative approach to defence against attacks," say its creators. How Can I Destroy Surveillance Cameras? From Anarchist News.

Facebook Algorithm Recognise You in Images Even if You're Not Looking. [DIY Tutorial] How to Block Surveillance Cameras. CCTV SPRAYHow to make a spray device to block a surveillance camera:Do you feel uncomfortable, confused, disgusted, or even irate because of a surveillance camera fixed at the wrong place? To block its view, spray-painting would be the best choice. It is highly accessible, inexpensive, and effective.

How Google Gave Itself Permission to Listen in on Your Computer's Microphone. FBI behind surveillance aircraft over Seattle, other cities. Free Speech, Facebook and the NSA: The Good, the Bad and the Ugly. You’re a Criminal in a Mass Surveillance World – How to Not Get Caught. You Are a Rogue Device by Matt Fikse-Verkerk and Brendan Kiley. Things You Won't Believe Spying On You AnonHQ. Pranksters Secretly Record Public Conversations And Post Them Online To Prote... Senate Fails to Extend PATRIOT Act - NSA Begins Shutdown of Bulk Spying Program. Media Falsely Selling USA Freedom Act as Genuine Reform to NSA Spying. NSA Planned To Hack Google App Store And Install Malware On All Android Apps.