A Former Baltimore Police Officer Breaks His Silence. Former Baltimore police officer Michael Wood made waves this week when he took to Twitter to unload a few tales of what he allegedly saw in his 11 years on the beat. 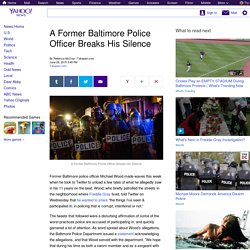 Wood, who briefly patrolled the streets in the neighborhood where Freddie Gray lived, told Twitter on Wednesday that he wanted to share “the things I’ve seen & participated in, in policing that is corrupt, intentional or not.” Maryland police seek federal help to take ill-gotten gains - Page 3 - tribune... February 16, 2013|By Ian Duncan, The Baltimore Sun Russo said state troopers are trained to conduct a proper search and seizure of a vehicle, and that people who carry large amounts of cash and whose explanations police find unsatisfactory are often linked to drug trafficking. 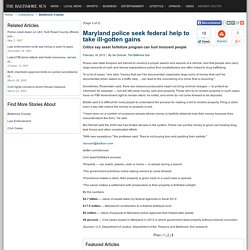 "In a lot of cases," she said, "money that can't be documented, especially large sums of money that can't be documented when asked on a traffic stop ... can lead to the uncovering of a crime that is occurring. " Sometimes, Rosenstein said, there are reasons prosecutors might not bring criminal charges — to protect an informant, for example — but will still seize money, cars and property. Those who try to reclaim property in such cases have no Fifth Amendment right to remain silent, he noted, and some do not come forward to be deposed. Biddle said it is difficult for most people to understand the process for making a bid to reclaim property. But Worrall said the 2000 law has limited abuses in the system. By the numbers. Baltimore Police Department, cop propaganda, Freddie Gray, police spin machin... Baltimore, Md. – In a bombshell revelation, Donta Allen, the man that was in the police transport van at the same time as Freddie Gray, spoke out for the first time publicly and directly refuted information leaked by police. 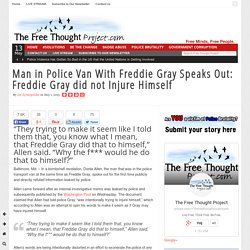 Allen came forward after an internal investigative memo was leaked by police and subsequently published by the Washington Post on Wednesday. The document claimed that Allen had told police Gray “was intentionally trying to injure himself,” which according to Allen was an attempt to spin his words to make it seem as if Gray may have injured himself. “They trying to make it seem like I told them that, you know what I mean, that Freddie Gray did that to himself,” Allen said. “Why the f*** would he do that to himself?” From Quelling Looters to Saving Lives, Baltimore Gangs Are Doing A Better Job...

Baltimore, Maryland – As we reported earlier this week, during the recent riots in Baltimore, rival gang members have called a truce to protect their communities. 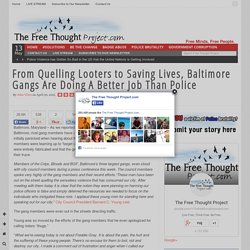 Police initially panicked when hearing about the truce and put out a warning that gang members were teaming up to “target cops.” It was quickly revealed that these claims were entirely fabricated and that the gang members did not have ill intentions by calling their truce. Members of the Crips, Bloods and BGF, Baltimore’s three largest gangs, even stood with city council members during a press conference this week. The council members spoke very highly of the gang members and their recent efforts. Wells Fargo Is Baltimore's Real Looter. Wall Street created the nightmare economic context of the unrest in Baltimore. 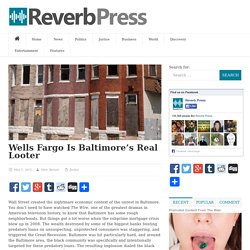 You don’t need to have watched The Wire, one of the greatest dramas in American television history, to know that Baltimore has some rough neighborhoods. But things got a lot worse when the subprime mortgage crisis blew up in 2008. The wealth destroyed by some of the biggest banks foisting predatory loans on unsuspecting, unprotected consumers was staggering, and triggered the Great Recession. Baltimore was hit particularly hard, and around the Baltimore area, the black community was specifically and intentionally targeted for these predatory loans. The resulting implosion dialed the black community’s wealth back to Segregation-era levels. 6 Shocking Facts About Poverty in Baltimore. As citizens of Baltimore join together to clean-up remnants of this week's unrest, many are highlighting the big issue underlying what's happened in the city: desperate poverty. 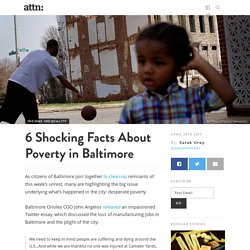 Baltimore Orioles COO John Angelos released an impassioned Twitter essay, which discussed the loss of manufacturing jobs in Baltimore and the plight of the city: We need to keep in mind people are suffering and dying around the U.S...And while we are thankful no one was injured at Camden Yards, there is a far bigger picture for poor Americans in Baltimore and everywhere who don’t have jobs and are losing economic civil and legal rights, and this makes inconvenience at a ballgame irrelevant in light of the needless suffering government is inflicting upon ordinary Americans. President Obama also addressed the deeper issues during a Tuesday press conference: Baltimore Cops Have Been Arrested at a High Rate. The Baltimore Police Department, which is investigating the death of Freddie Gray a week after its officers took him into custody, had one of the nation’s highest rates of officers who were arrested for the seven years that ended in 2011. 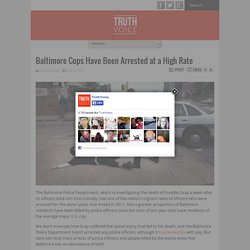 And a greater proportion of Baltimore residents have been killed by police officers since the start of last year than have residents of the average major U.S. city. We don’t know yet how Gray suffered the spinal injury that led to his death, and the Baltimore Police Department hasn’t arrested any police officers, although it suspended six with pay. But data sets that track arrests of police officers and people killed by the police show that Baltimore has an abundance of both. Over the seven years that ended in 2011, at least 55 of Baltimore’s police officers were arrested on personal or professional charges, according to Bowling Green State University criminologist Philip M. Stinson, whom we profiled last week. This data should be treated with caution. Baltimore’s violent protesters are right: Smashing police cars is a legitimat... As a nation, we fail to comprehend Black political strategy in much the same way we fail to recognize the value of Black life. 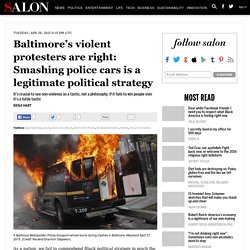 We see ghettos and crime and absent parents where we should see communities actively struggling against mental health crises and premeditated economic exploitation. And when we see police cars being smashed and corporate property being destroyed, we should see reasonable responses to generations of extreme state violence, and logical decisions about what kind of actions yield the desired political results. GOP Rep: Let's Take Food Stamps From Baltimore Protesters. What could possibly be more fun than taking candy from a baby? 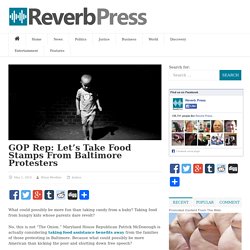 Taking food from hungry kids whose parents dare revolt? No, this is not “The Onion.” Maryland House Republican Patrick McDonough is actually considering taking food assistance benefits away from the families of those protesting in Baltimore. Because what could possibly be more American than kicking the poor and shutting down free speech? A caller to McDonough’s radio show asked if it would be possible “…to take away benefits from families, from like the parents who are collecting welfare.”

The rebellion in Baltimore is an uprising against austerity, claims top US ac... For Baltimore to be the setting for the latest in a recent spate of high-profile police murders and riots in America – after Ferguson, New York and North Charleston – is especially compelling in the public imagination because the city was also the location for David Simon’s brilliant TV series The Wire. 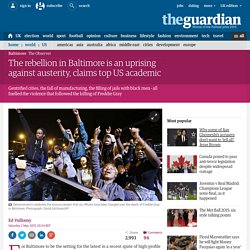 Baltimore is the city from which Simon wrote for this newspaper in 2013 about “two Americas” in the “horror show” his country has become, one crucial element of which is that the US is “the most incarcerative state in the history of mankind, in terms of the sheer numbers of people we’ve put in American prisons”. The Wire, he said, “was about people who were worthless and who were no longer necessary”, most of them black, and who become the assembly-line raw material for “the prison-industrial complex”. But these events are variations on old themes that have not gone away since segregation, across time and across America. . ■ In 2009, two-thirds of life sentences were given to non-whites. Baltimore Unrest Shows America’s Police State Has Failed To Learn From History. Ben Morris May 2, 2015 (TFC) Baltimore, MD — It is a story that has been played out too many times. The setting is different, but the plot is the same. An unarmed man dies in police custody, and a fed up public has responded with protests and vandalism.

Untelevised Revolution: Inside Baltimore's Massive Police Accountability March. Hope in Baltimore After All 6 Officers Involved In Gray’s Death Are Officially Charged ReAnna Ruiz May 4, 2015 (ANTIMEDIA) Baltimore, MD — On Saturday May 2, 2015, there was a feeling of gratitude and hope for the advocates of Freddie Gray. The day began with an abundance of optimism, as it was the day after Baltimore City Chief Prosecutor, Marilyn Mosby, announced that all six law enforcement officials involved in the death of Freddie Gray, including the lieutenant and sergeant, would be officially charged in his death.

This tragic incident that occurred two weeks ago surfaces during the devastating police brutality epidemic currently plaguing the United States. Since Gray’s death, there has been a tremendous effort from Baltimore city residents in the form of protests, rallies and marches throughout the city.

Wolf Blitzer interviews Deray McKesson about violence in Baltimore. Gang members: We did not make truce to harm cops. How is it that Baltimore gang members had the most rational interview of this... Almost Done! Choose an available username to complete sign up Forgot Password Enter the email associated with your account and you will be emailed instructions to reset your password A recovery link has been sent to your email. Activation Link Was Emailed There's one last annoying step. We require an email to sign up Reactivate Account This account has been deactivated or was never activated. A reactivation link has been sent to your email address. Confirm Your Email Address We have sent you an email with a link to confirm and activate your account. 10 Images of the Baltimore Riots You Won't See on TV. On Monday, the media was quick to paint a single picture of Baltimore: a chaos scene of violence and mayhem filled with images of looting, rioting, the burning of a CVS and the torching of a police car.

But on the ground, a very different story unfolded. You'd never know it from the media's Gotham-esque portrayal of a city riddled with criminals and "thugs," but on Monday night Baltimore was also a story of good Samaritans trying to disperse emotional crowds. It was a story of everyday citizens determined to dissipate tensions between protesters and police, of ordinary folks cleaning up their city while the media turned its cameras away. CNN Guest Says Baltimore Protests ‘Not a Riot’ But ‘Uprisings’ In Response To...

It’s rare for a mainstream media outlet to defend anyone but the police, but recently, during CNN’s live coverage of the Baltimore unrest Monday night commentator Marc Lamont Hill made a bold and controversial statement… Hill said that what was taking place was “not a riot” but “uprisings.” These uprisings, he said, were in response to African-Americans “dying in the streets for months, years, decades, centuries” as a direct result of “police terrorism.” Not surprisingly, CNN Tonight host Don Lemon, disagreed, urging that “there shouldn’t be calm tonight.” But Hill doubled down on his earlier statements, saying that when there are “black people…dying in the streets for months, years, decades, centuries” there is a need for “resistance to oppression and when resistance occurs, you can’t circumscribe resistance.” Eyewitnesses: The Baltimore Riots Didn't Start the Way You Think.

An unarmed black person is six times more likely to be killed by police than is a white person who carries a weapon. As cities erupt after decades and centuries of oppression and violence at the hands of police, calls for nonviolence can be deafening. “Violence isn’t the answer,” the moralists scream. They are right. You Will Be Surprised Who the Outside Agitators Really Are in Baltimore. Lest we forget: When white kids do it, it’s not a riot, it’s a “celebration” National Guard Deployed In A Baltimore That's As Broken As Freddie Gray's Spine.