Steps of the Scientific Method. Please ensure you have JavaScript enabled in your browser. 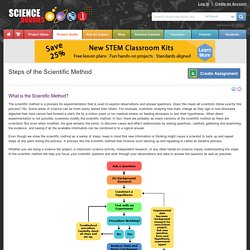 If you leave JavaScript disabled, you will only access a portion of the content we are providing. <a href="/science-fair-projects/javascript_help.php">Here's how. </a> What is the Scientific Method? The scientific method is a process for experimentation that is used to explore observations and answer questions. Even though we show the scientific method as a series of steps, keep in mind that new information or thinking might cause a scientist to back up and repeat steps at any point during the process.

Whether you are doing a science fair project, a classroom science activity, independent research, or any other hands-on science inquiry understanding the steps of the scientific method will help you focus your scientific question and work through your observations and data to answer the question as well as possible. Educator Tools for Teaching the Scientific Method. Procedure. [Types of Variables] [Activity #1] [Activity #2] [Activity #3] [Steps to Success] [Move Beyond] You're doing great! 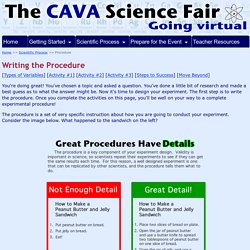 You've chosen a topic and asked a question. You've done a little bit of research and made a best guess as to what the answer might be. Now it's time to design your experiment. The first step is to write the procedure. The procedure is a set of very specific instruction about how you are going to conduct your experiment. Sadly, no one could eat the sandwich on the left. Variables Details also help to control variables in your experiment. The Venn Diagram of Irrational Nonsense. The curiously revered world of irrational nonsense has seeped into almost every aspect of modern society and is both complex and multifarious. 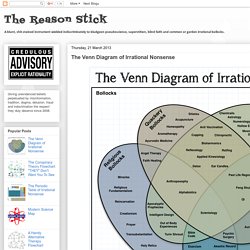 Therefore rather than attempt a comprehensive taxonomy, I have opted instead for a gross oversimplification and a rather pretty Venn Diagram. In my gross over simplification the vast majority of the multitude of evidenced-free beliefs at large in the world can be crudely classified into four basic sets or bollocks. Namely, Religion, Quackery, Pseudoscience and the Paranormal. However as such nonsensical beliefs continue to evolve they become more and more fanciful and eventually creep across the bollock borders. Although all the items depicted on the diagram are completely bereft of any form of scientific credibility, those that successfully intersect the sets achieve new heights of implausibility and ridiculousness. Religious Bollocks ∩ Quackery Bollocks ∩ Pseudoscientific Bollocks ∩ Paranormal Bollocks = Scientology UPDATE 24th March 2013. sScienceMap.

Understanding Science: An overview. To understand what science is, just look around you. 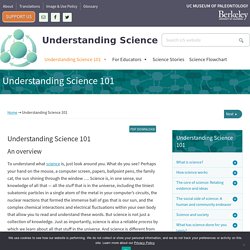 What do you see? Perhaps, your hand on the mouse, a computer screen, papers, ballpoint pens, the family cat, the sun shining through the window …. Science is, in one sense, our knowledge of all that — all the stuff that is in the universe: from the tiniest subatomic particles in a single atom of the metal in your computer's circuits, to the nuclear reactions that formed the immense ball of gas that is our sun, to the complex chemical interactions and electrical fluctuations within your own body that allow you to read and understand these words. But just as importantly, science is also a reliable process by which we learn about all that stuff in the universe. Instructional Model - Argument-Driven Inquiry. A manifesto for reproducible science : Nature Human Behaviour. How to quickly spot dodgy science. I haven’t got time for science, or at least not all of it. 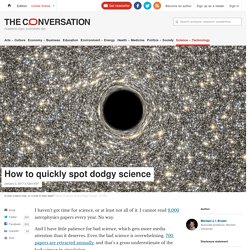 I cannot read 9,000 astrophysics papers every year. No way. And I have little patience for bad science, which gets more media attention than it deserves. Even the bad science is overwhelming. 700 papers are retracted annually, and that’s a gross underestimate of the bad science in circulation. I, like most scientists, filter what I read using a few tricks for quickly rejecting bad science. Okay, this looks bad Good science is often meticulous and somewhat anxious. If you’re taking the time to do meticulous science, why not take the time to prepare a good manuscript? Recently, Ermanno Borra and Eric Trottier claimed to have detected “signals probably from extraterrestrial intelligence”. Was my caution justified? Furthermore, the surprising conclusions relied on a tiny subset of data, and there was no attempt to confirm the conclusions with additional observations. Of course, there are exceptions to good-looking good science.

How we edit science part 1: the scientific method. We take science seriously at The Conversation and we work hard to report it accurately. 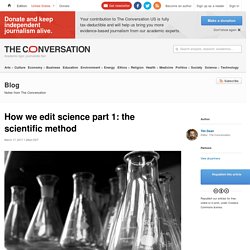 This series of five posts is adapted from an internal presentation on how to understand and edit science by our Australian Science & Technology Editor, Tim Dean. We thought you might also find it useful. Introduction If I told you that science was a truth-seeking endeavour that uses a single robust method to prove scientific facts about the world, steadily and inexorably driving towards objective truth, would you believe me? Many would. The public perception of science is often at odds with how science actually works.

But science is actually far messier than this - and far more interesting. In order to report or edit science effectively - or to consume it as a reader - it’s important to understand what science is, how the scientific method (or methods) work, and also some of the common pitfalls in practising science and interpreting its results.