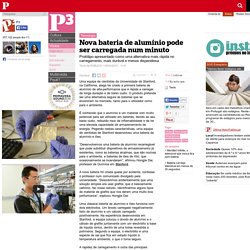 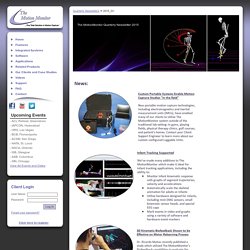 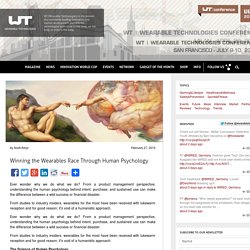 From a product management perspective, understanding the human psychology behind intent, purchase, and sustained use can make the difference between a wild success or financial disaster. Wearables vs. Anti-wearables. Dozens of new self-tracking wearable devices appear every month. 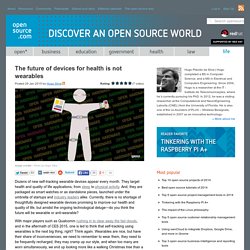 They target health and quality of life applications, from sleep to physical activity. And, they are packaged as smart watches or as standalone pieces, launched under the umbrella of startups and industry leaders alike. Currently, there is no shortage of thoughtfully designed wearable devices promising to improve our health and quality of life, but amidst the ongoing technological deluge—do you think the future will be wearable or anti-wearable? Medical Design. Advanced fabrics seminar scheduled. Sustainable Energy Systems - MIT Portugal Program. Current debates and trends in energy, both within Portugal and the EU, highlight some significant energy systems challenges. 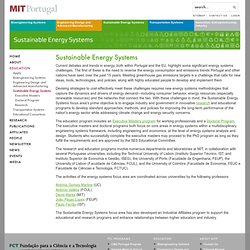 The first of these is the need to reverse the energy consumption and emissions trends Portugal and other nations have seen over the past 15 years. Meeting greenhouse gas emissions targets is a challenge that calls for new ideas, tools, technologies, and policies, along with highly educated people to develop and implement them. Devising strategies to cost-effectively meet these challenges requires new energy systems methodologies that capture the dynamics and drivers of energy demand—including consumer behavior, energy resources (especially renewable resources) and the networks that connect the two. The education program includes an Executive Masters program for working professionals and a Doctoral Program. The activities of the energy systems focus area are coordinated across universities by the following professors: Videos - Mcor Technologies. Latest in. Apple and Google Announce Health Data Integration At their latest developer conferences, Apple and Google each announced their plans to integrate self-tracking data into their mobile operating systems. 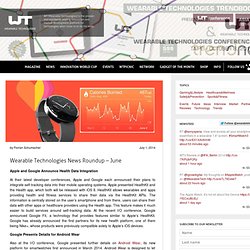 Apple presented HealthKit and the Health app, which both will be released with iOS 8. HealthKit allows wearables and apps providing health and fitness services to share their data via the HealthKit APIs. KNOW NOW // Conhecimento e Inovação. Building the case against Apple developing a medical device. While the most recent meeting made headlines, the first time Apple executives actually met with the FDA wasn’t at the end of 2013, but rather three-and-a-half years ago. 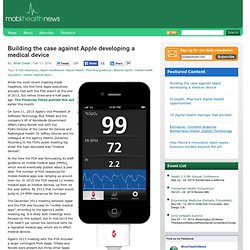 The Financial Times pointed this out earlier this month. On June 11, 2010 Apple’s Vice President of Software Technology Bud Tribble and the company’s VP of Worldwide Government Affairs Cathy Novelli met with the FDA’s Director of the Center for Devices and Radiological Health Dr. Global Wearables market round-up: Who is doing what? EmailShare 4EmailShare Lot has been happening in the wearable industry over the last 6 months. 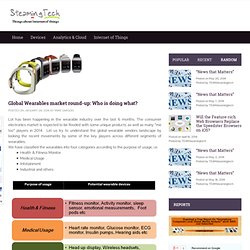 The consumer electronics market is expected to be flooded with some unique products as well as many “me too” players in 2014. Let us try to understand the global wearable vendors landscape by looking the recent movements by some of the key players across different segments of wearables. Wearable Technology Database. The Rise of the Wearable Technology Market. If you’re tuning into the tech-based conference SXSW this week, you’ll see a certain type of technology dominating the conversation there: wearable technology. 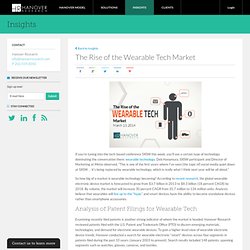 Deb Hanamura, SXSW participant and Director of Marketing at Metia observed, “This is one of the first years where I’ve seen [the topic of] social media quiet down at SXSW… it’s being replaced by wearable technology, which is really what I think next year will be all about.” So how big of a market is wearable technology becoming? According to recent research, the global wearable electronic device market is forecasted to grow from $3.7 billion in 2013 to $8.3 billion (18 percent CAGR) by 2018. By volume, the market will increase 30 percent CAGR from 35.7 million to 134 million units.

Analysts believe that wearables will live up to the “hype,” and smart devices have the ability to become standalone devices rather than smartphone accessories. Analysis of Patent Filings for Wearable Tech U.S. What Companies Are Dominating IP Ownership? Will wearables solve health issues? - Startup Pirates Blog. Technological Apparel. Body Blogging. 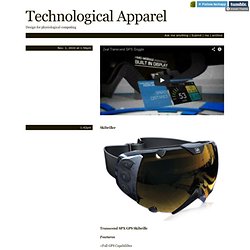 Preview of Wearable Future at CES 2014: Shift to Healthcare and Medical Devices. Intel CEO with Edison computer; photo from The Telegraph During a busy week filled with curved 4K televisions and presentation blunders, wearables stole the show during CES in Las Vegas. While many used the event to announce new fitness and lifestyle activity trackers, smart watches, and personal assistants, several companies announced wearable medical devices and healthcare applications.

These companies are positioning themselves to seize opportunities both as the wearables market crosses over from consumer to healthcare and as the need for new devices emerges. Flex Stretch Electronics Conference Review. Cath Rogan reports from Eindhoven When I mentioned I was going to an event called Stretch-Flex, there were a few raised eyebrows among those who know me but had never imagined me at a yoga retreat. Indeed, walking through Eindhoven’s impressive High Tech Campus en-route to the Holst Centre on a quiet, clear November morning, the setting would have been quite appropriate had that been the case. Sensorização Eletrónica para a Profilaxia de Patologias dos Membros Inferiores. Enquadramento. Wearable body sensor: Topics by WorldWideScience.org. Sample records for wearable body sensor from WorldWideScience.org A Study of Implanted and Wearable Body Sensor Networks CERN Multimedia.

Ultrathin LEDs Create New Classes of Lighting and Display Systems — LED professional - LED Lighting Technology, Application Magazine. Applications for the arrays, which can be printed onto flat or flexible substrates ranging from glass to plastic and rubber, include general illumination, high-resolution home theater displays, wearable health monitors, and biomedical imaging devices. Rogers and collaborators at the U. of I., Northwestern University, the Institute of High Performance Computing in Singapore, and Tsinghua University in Beijing describe their work in the Aug. 21 issue of the journal Science. Compared to organic LEDs, inorganic LEDs are brighter, more robust and longer-lived. Organic LEDs, however, are attractive because they can be formed on flexible substrates, in dense, interconnected arrays. The researchersâ€™ new technology combines features of both. To overcome requirements on device size and thickness associated with conventional wafer dicing, packaging and wire bonding methods, the researchers developed epitaxial growth techniques for creating LEDs with sizes up to 100 times smaller than usual.

Studying the brain with micro-injectable. (Left) Concept image of the multifunctional, multilayered design of the micro-injectable LED opto-device (Right) An image of the LED device shown to scale Professor John A. Rodgers has previously taught us what the future has in store by way of flexible, stampable microelectronics that adhere to the surface of human skin. As revolutionary as those devices can be - providing critical health-related information from real-time physiological monitoring of the human body - they are limited in their ability to penetrate the depth of human tissue for an even greater understanding.

A recent study by Rodgers and his team from UIUC alongside Professor Michael R. Bruchas of Washington University has found a unique solution to the tissue issue - injectable LEDs that can stimulate and monitor brain activity. The injectable optogenetic device allows researchers to study animal and human brain activity without limiting the movement or behavior of test subjects caused by previous methods. Are Machines On The Net Making Humans Obsolete? The Industrial Age reinvented productivity. How a TED Talk is helping D-Rev deliver $80 prosthetic knees. Wearable Wars: 3 Reasons Why 'Android Wear' Will Rule the Wrist. Google got into the tech wearables space in a big way this week with the announcement of Android Wear. This hi-tech sports jacket will let you shine in the darkness.

A 'Smart' Pair of Shoes With a Noble Purpose. Wearables for pregnancy and newborns. We already reported on wearable technologies for children and babies but there are a few more wearable products coming up, especially for babies, even for those that are not born yet! Mediamatic.net. University Research and Collaboration. 3lectromode. Wearable Technology. Smart Devices. Tracking The Wearable Computing Revolution. About Smart Textiles. Textile Sensors: Wearable Smart Garments Are Driving The Quantified Self. The World Technology Network. Sensors add a new basic function to garments. Main Page - IEETA. SA - Centre Suisse d'Electronique et de Microtechnique - Swiss Center for Electronics and Microtechnology. Topics Technology.