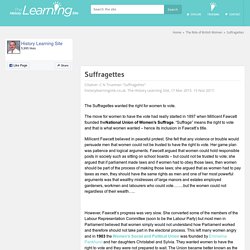 The move for women to have the vote had really started in 1897 when Millicent Fawcett founded theNational Union of Women’s Suffrage. “Suffrage” means the right to vote and that is what women wanted – hence its inclusion in Fawcett’s title. Millicent Fawcett believed in peaceful protest. She felt that any violence or trouble would persuade men that women could not be trusted to have the right to vote. Her game plan was patience and logical arguments. However, Fawcett’s progress was very slow. In fact, the Suffragettes started off relatively peacefully. Both women refused to pay a fine preferring to go to prison to highlight the injustice of the system as it was then. The Suffragettes refused to bow to violence. Suffragettes were quite happy to go to prison. The government of Asquith responded with the Cat and Mouse Act. As a result, the Suffragettes became more extreme. Women's suffrage in the United States.

Women's suffragists parade in New York City in 1917, carrying placards with signatures of more than a million women.[1] Women's suffrage in the United States, the legal right of women to vote in that country, was established over the course of several decades, first in various states and localities, sometimes on a limited basis, and then nationally in 1920. 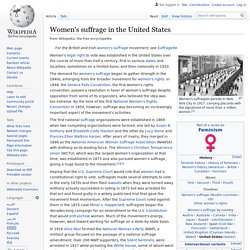 'Suffragette': The Real Women Who Inspired the Film. In early 20th century Britain, the cause of female suffrage was usually ignored by the press and dismissed by politicians. 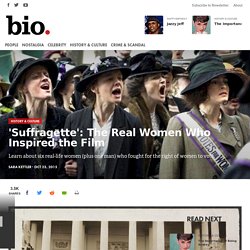 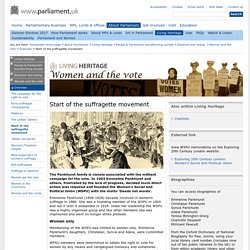 In 1903 Emmeline Pankhurst and others, frustrated by the lack of progress, decided more direct action was required and founded the Women's Social and Political Union (WSPU) with the motto 'Deeds not words'. Emmeline Pankhurst (1858-1928) became involved in women's suffrage in 1880. She was a founding member of the WSPU in 1903 and led it until it disbanded in 1918. Under her leadership the WSPU was a highly organised group and like other members she was imprisoned and went on hunger strike protests. 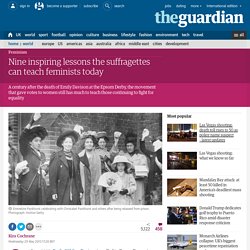 She waited at Tattenham Corner as the horses streamed past, then squeezed through the railings and made an apparent grab for the reins of the king's horse, Anmer. In the Manchester Guardian the next day, an eyewitness reported: "The horse fell on the woman and kicked out furiously". News footage shows racegoers surging on to the track to find out what had happened. Davison suffered a fractured skull and internal bleeding, and as hate mail against her poured in to the hospital, she remained unconscious.

She died four days later. There has always been speculation about Davison's intentions. In a movement defined by acts of daring, Davison's bravery was extraordinary. Find your voice, and use it This echoes the recollections of Kitty Marion, an actor as well as a suffragette. Never give up. Emmeline Pankhurst. Women's suffrage. British suffragettes demonstrating for the right to vote in 1911 U.S. women suffragists demonstrating in February 1913 Poster of the German Women's Movement, 1914: „Heraus mit dem Frauenwahlrecht“ (= "Get out with Women's Suffrage") Women's suffrage (also known as female suffrage, woman suffrage or woman's right to vote) is the right of women to vote in elections. 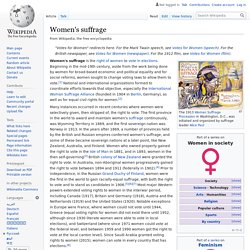 Limited voting rights were gained by women in Finland, Iceland, Sweden and some Australian colonies and western U.S. states in the late 19th century.[1] National and international organizations formed to coordinate efforts to gain voting rights, especially the International Woman Suffrage Alliance (founded in 1904, Berlin, Germany), and also worked for equal civil rights for women.[2] In 1881, the Isle of Man (a Crown dependency, not part of the UK) enacted the Manx Election Act, which gave women who owned property the right to vote in the country's Parliament, Tynwald.

History[edit] Anna II, Abbess of Quedlinburg. Timeline[edit] The Fight for Women’s Suffrage - Women’s History. My TV provider is not listed. 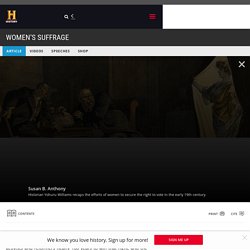 Why not? We are currently working on adding more TV providers. Please check back frequently to see if your TV provider has been added.