The Best Data Visualization Projects of 2014 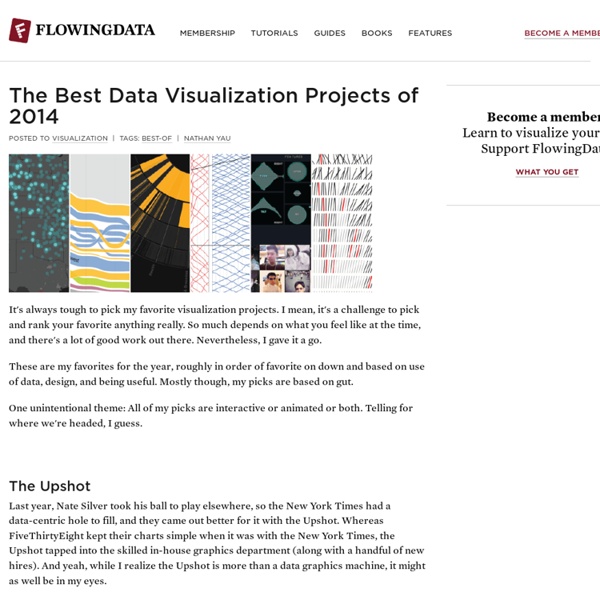 It's always tough to pick my favorite visualization projects. I mean, it's a challenge to pick and rank your favorite anything really. So much depends on what you feel like at the time, and there's a lot of good work out there. Nevertheless, I gave it a go. These are my favorites for the year, roughly in order of favorite on down and based on use of data, design, and being useful. Mostly though, my picks are based on gut. One unintentional theme: All of my picks are interactive or animated or both. The Upshot Last year, Nate Silver took his ball to play elsewhere, so the New York Times had a data-centric hole to fill, and they came out better for it with the Upshot. If I didn't cluster the Upshot visualization projects into this one section, the individual works would dominate the list. Where We Came From and Where We Went No doubt feeding off the popularity of the dialect quiz map from the end of 2013, the state-by-state migration charts were also fun and playful. Visualizing Algorithms

Pisa 2012 results: which country does best at reading, maths and science? The latest Programme for International Assessment (Pisa) results are out today. The release by the Organisation for Economic Co-operation and Development (OECD) shows that the UK has seen slight improvements in maths and reading performance but has slipped down four places in the overall ranking for science. The UK is ranked 23rd for reading, 26th for maths and 20th for science. In 2009 it was placed 25th, 28th and 16th respectively. Shanghai tops the overall ranking with Singapore and Hong Kong being placed second and third place respectively. Gallery · mbostock/d3 Wiki Wiki ▸ Gallery Welcome to the D3 gallery! More examples are available on bl.ocks.org/mbostock. If you want to share an example and don't have your own hosting, consider using Gist and bl.ocks.org.

Cultural history via where notable people died A group of researchers used where "notable individuals" were born and place of death, based on data from Freebase, as a lens into culture history. The video explainer below shows some results: From Nature: The team used those data to create a movie that starts in 600 bc and ends in 2012. Sometimes Good Data is Hard to Come By Sometimes the most challenging aspect of creating data visualizations is finding an interesting data set that tells a story. As I’ve mentioned before, try all you want but dressing up dull data won’t disguise poor data. The truth of the matter is, if you don’t have good data even the most visually stunning infographics will still look like they’re missing something.

The top 20 data visualisation tools One of the most common questions I get asked is how to get started with data visualisations. Beyond following blogs, you need to practise – and to practise, you need to understand the tools available. In this article, I want to introduce you to 20 different tools for creating visualisations: from simple charts to complex graphs, maps and infographics. Almost everything here is available for free, and some you have probably installed already.

The Counted: people killed by police in the United States in 2015 – interactive The Counted is a special Guardian project to record all people killed by police in the United States this year. We have gathered information from official databases and crowdsourced counts to create a full and detailed view of killings by law enforcement agents in the US. This page shows the names and, where possible, faces of those killed since January 1 2015, as well as other details about the manner of their deaths and the status of any investigations into the incidents.

UK Open Data Institute (Silicon Roundabout) Posted by Information Age on 28 November 2011 Share article 30 Simple Tools For Data Visualization There have never been more technologies available to collect, examine, and render data. Here are 30 different notable pieces of data visualization software good for any designer's repertoire. They're not just powerful; they're easy to use.

Online Data - ESRI ArcGIS Online Map Services Use these map services to create web maps in ArcGIS Online, or access them directly from ArcGIS for Desktop and ArcGIS for Server. Developers can access them through ArcGIS Web Mapping APIs to build web applications. Visualising Data » Resources Here is a collection of some of the most important, effective, useful and practical data visualisation tools. The content covers the many different resources used to create and publish visualisations, tools for working with colour, packages for handling data, places to obtain data, the most influential books and educational programmes and qualifications in visualisation itself. * Please note there are another 40-50 items to add to these collections but they are going to be saved for now and launched alongside the new version of this website around April *

Decoding Streets: Secret Symbols of the Urban Underground Decoding Streets: Secret Symbols of the Urban Underground Article by Urbanist, filed under Urban Exploration in the Travel category. Somewhere between city signs and street graffiti lies a surprisingly rich and colorful language of secret messages, all hidden in plain sight on roads and sidewalks. This spray-painted slang we walk over and drive along every day is employed by infrastructure engineers, utility companies and other city workers. Laurence Cawley of BBC News recently explored this strange world of colorful spray-painted dots, arrows, text and more, all of which denote what lies below the surface of the city. These markings may seem rushed and crude to the casual observer, but they are essential to the protection underground power lines, pipes and a maze of other potential subterranean hazards, as well as to the safety of those who work around them.

Media Map Shows Impact of Information (December 5, 2011) How do we know that media make a difference? We’ve looked at the numbers. The Media Map Project, a multi-faceted research collaboration between Internews and The World Bank Institute, has made 25 data sets which collectively touch on every country in the world and up to 30 years' worth of information available to the public for download and analysis. Visualizations on the site allow viewers to interact with and test the data in different ways. Correlation between economic performance (GDP) and freedom of expression / freedom of the press For example: