Where the World Finds Bioethics 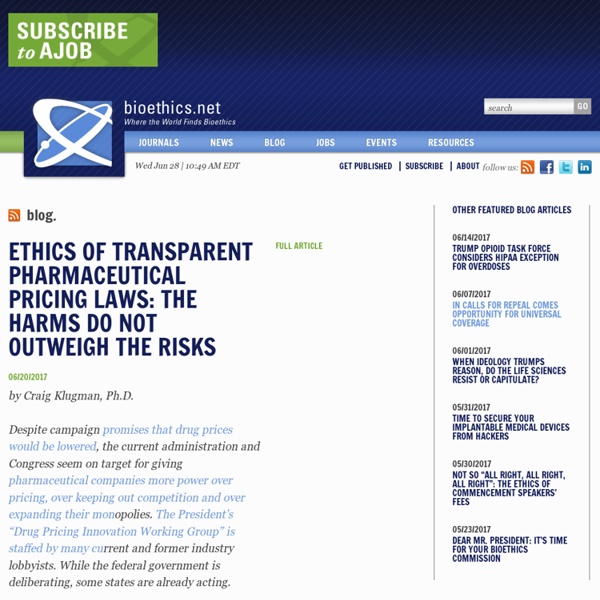 Bioethics 101 | NWABR.ORG Bioethics 101 provides a systematic, five-lesson introductory course to support educators in incorporating bioethics into the classroom through the use of sequential, day-to-day lesson plans. This curriculum is designed to help science teachers in guiding their students to analyze issues using scientific facts, ethical principles, and reasoned judgment. These lessons represent a "best of" compilation from our popular Ethics Primer. Through the use of case studies, ethical principles, decision-making frameworks and stakeholder role-play, students are fully supported in learning how to justify an answer to an ethical question. If you’ve been looking for a structured way to introduce bioethics into your classroom, this resource is for you! Click here to download the entire curriculum. In order for us to measure how our curriculum resources are being used, please take a moment to contact us and let us know the class or classes in which you're using our lessons.

Spiders On Drugs Spiders On Drugs Scientists at the United States National Aeronautics and Space Administration (NASA) have turned their attention from the mysteries of the cosmos to a more esoteric area of research: what happens when you get a spider stoned. Their experiments have shown that common house spiders spin their webs in different ways according to the psychotropic drug they have been given. Nasa scientists believe the research demonstrates that web-spinning spiders can be used to test drugs because the more toxic the chemical, the more deformed was the web. * Spiders on marijuana made a reasonable stab at spinning webs but appeared to lose concentration about half-way through. * Those on Benzedrine - "speed" - spin their webs "with great gusto, but apparently without much planning leaving large holes", according to New Scientist magazine. * On chloral hydrat, an ingredient of sleeping pills, spiders "drop off before they even get started". * See what happens to their mental state.

Imperial Festival Materials, microbes, maths and medicine. Explore Imperial's ground breaking research with a packed schedule of activities, talks and performances for all ages. This year's Festival will take place on Friday 9 and Saturday 10 May 2014. The Festival will be open to the public at the following times:16.00 - 22.00 on Friday12.00 - 18.00 on Saturday The Festival is free and open to all, so drop in to put your questions to hundreds of scientists and engineers, take part in hands-on science demonstrations, peek behind the scenes of Imperial’s most exciting labs, and enjoy music, dance and comedy. This will be the third annual Imperial Festival and there will be even more activities, performances and demonstrations, and three new venues: Light Zone: From optical illusions to an invisibility cloak, explore the science of light, polarization and thermal cameras in an all new pop-up marquee. The Festival takes place at Imperial’s South Kensington Campus which is situated in London’s museum quarter.

The 10 weirdest animal discoveries of 2012 As the year comes to an end, it's time to look back at the grossest, oddest and simply most fascinating animals to make the headlines in 2012. There were zombie worms and penis fish, not to mention turtles with a strange way of getting rid of urine. Read on for 2012's most bizarre. 1. An ancient fossil found in Canada looks like a field of tulips frozen in stone. Siphusauctum gregarium, a 500-million-year-old filter feeder, was the length of a dinner knife with a bulbous "head" containing a feeding system and a bizarre gut. 2. Moving on to other ancient marine wildlife, here's a sea creature much scarier than an animal that looks like a flower. Pliosaurus funkei, as it is now properly known, was 40 feet (12 meters) long with a 6.5-foot (2 m)-long skull. "They had teeth that would have made a T. rex whimper," study researcher Patrick Druckenmiller, a paleontologist at the University of Alaska Museum, told LiveScience. Pliosaur crushing down on Plesiosaur with 33,000 lb bite. 3. 4. 5. 7.

Music's potentially healing powers in treatment of afflictions (Ricardo DeAratanha / Los…) Yes, yes, it hath charms to soothe a savage breast (or beast, if you prefer to repeat a common mistake). But researchers are finding that music may be an effective balm for many other afflictions: the isolation of conditions such as autism and Alzheimer's disease, the disability that results from stroke, the physical stress of entering the world too early. The hope of music's curative powers has spawned a community in the United States of some 5,000 registered music therapists, who have done post-college study in psychology and music to gain certification. While music therapists use a mix of improvisation and proven techniques to help patients, neuroscientists are looking to uncover the scientific basis for music's healing powers. By doing so, they hope to better identify which patients might respond best to music and what musical techniques might best help them to regain lost or compromised function.

Faith-Based Activism on Climate Change | June 19, 2015 | Religion & Ethics NewsWeekly KIM LAWTON, correspondent: Deep in the bayous of south Louisiana, residents have little doubt about the impact of climate change. THERESA DARDAR: We live here, so we see it happening. We see the land sinking, sea level rise, we see it all. LAWTON: Theresa Dardar is part of a small Native American fishing community whose families have been here for generations. On a boat ride down the bayou, she shows me where her grandfather lived. DARDAR: This used to be full of trees, and they used to have a lot of cattle here. LAWTON: Today, water has overtaken much of the marshland, and little can grow here. DARDAR: Ghost trees or skeletons. LAWTON: Most scientists who study this area say changes in climate fueled by growing amounts of carbon emissions have led to rising sea levels. REV. LAWTON: Kristina Peterson is a Presbyterian pastor, professor of environmental planning at the University of New Orleans, and coordinator of the interfaith Wetlands Theological Project.

Birthplace of dogs discovered The time-tested bond between humans and dogs is well-documented, but researchers have puzzled for a long time over where and when our species became so interlocked. Previous studies indicated East Asia as the site where wolves were first tamed, but a new study delves even deeper and reveals even more history of man's best friend. From Science Daily, These discoveries are presented in an article in the scientific journal Molecular Biology and Evolution, where it is claimed that the dog appeared 16,000 years ago, in Asia, south of the Yangtze River in China. This is a considerably more specific date and birthplace than had previously been put forward. According to the researchers, taming wolves to work with humans occurred at roughly the same time as people in this part of the world transitioned from hunters and gatherers to farmers. Unfortunately, it appears that the bond between man and wolf/dog was still a bit tenuous. Source: Science Daily

Science Weekly Extra: An extended interview with Ben Goldacre on Bad Pharma | Science We presented some edited highlights of Alok Jha's interview with science writer, broadcaster, doctor and academic Ben Goldacre in the show on 8 October. In today's Science Weekly Extra we bring you the full interview. Goldacre's new book Bad Pharma is a forensic investigation into how the pharmaceutical industry – which invests millions in the high-stakes process of drug development and clinical trials – ensures its products reach the market. Goldacre discusses the central thesis of Bad Pharma, that drug development and evidence-based medical research are not working for the benefit of patients and may even be endangering lives. Goldacre also explains why he thinks there is a need for more transparency in the patient-doctor relationship and why science journals and regulatory authorities need to rethink the evidence threshold and seek full and open disclosure of both positive and negative drug trials.

Top Ten Takeaways from 'Laudato Si'' | America Magazine Pope Francis’ revolutionary new encyclical calls for a “broad cultural revolution” to confront the environmental crisis. “Laudato Si” is also quite lengthy. Can it be summarized? 1) The spiritual perspective is now part of the discussion on the environment. The greatest contribution of “Laudato Si” to the environmental dialogue is, to my mind, its systematic overview of the crisis from a religious point of view. 2) The poor are disproportionately affected by climate change. The disproportionate effect of environmental change on the poor and on the developing world is highlighted in almost every section of the encyclical. 3) Less is more. Pope Francis takes aim at what he calls the “technocratic” mindset, in which technology is seen as the “principal key” to human existence (No. 110). 4) Catholic social teaching now includes teaching on the environment. 5) Discussions about ecology can be grounded in the Bible and church tradition. 6) Everything is connected—including the economy.

BBC News | HEALTH | Frankenstein fears after head transplant A controversial operation to transplant the whole head of a monkey onto a different body has proved a partial success. The scientist behind it wants to do the same thing to humans, but other members of the scientific community have condemned the experiments as "grotesque". Professor Robert White, from Cleveland Ohio, transplanted a whole monkey's head onto another monkey's body, and the animal survived for some time after the operation. The professor told the BBC's Today programme how he believes the operation is the next step in the transplant world. And he raised the possibility that it could be used to treat people paralysed and unable to use their limbs, and whose bodies, rather than their brains, were diseased. "People are dying today who, if they had body transplants, in the spinal injury community would remain alive." He added: "We've been able to retain the brain in the skull, and in the head." 'Scientifically misleading' He added: "I cannot see any medical grounds for doing this.