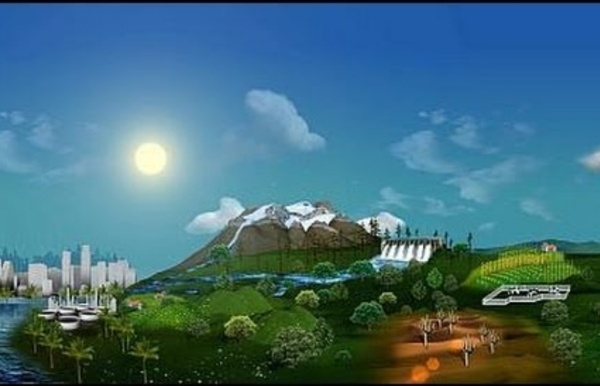 Flooding and Climate Change: Everything You Need to Know Jump to Section Floods are the most common (and among the most deadly) natural disasters in the United States. They have brought destruction to every state and nearly every county, and in many areas they are getting worse. As global warming continues to exacerbate sea level rise and extreme weather, our nation’s floodplains are expected to grow by approximately 45 percent by century’s end. Resources for Primary and Secondary Students - ABC Education Transcript Transcript Shot of numerous dead trees in an arid landscapeREPORTERYes, the drought is still affecting most of Australia, even though it's winter. But some towns haven't had to worry too much because they have a virtual endless running tap on their doorstep - the Murray, Murrumbidgee and Darling rivers.Shot of map showing the Darling River, Murrumbidgee River and Murray RiverREPORTERBut those endless water supplies are drying up.

Earth's Freshwater Future: Extremes of Flood and Drought By Ellen Gray, NASA's Earth Science News Team, and Jessica Merzdorf, NASA's Goddard Space Flight Center This article is part of a series that explores NASA research into Earth's fresh water and surveys how those advances help people solve real world problems. Learn more. NASA satellites are a prominent tool for accounting for water, as it constantly cycles from water vapor to rain and snow falling onto soils, and across and beneath the landscape. As Earth’s atmosphere warms due to greenhouse gases and the satellite data record continues to get longer and more detailed, scientists are studying how climate change is affecting the distribution of water.

Murray-Darling Basin Authority The Murray–Darling Basin is the catchment for Australia's largest river system. The Murray and the Darling rivers are Australia's longest rivers. The Basin covers an area of more than 1 million square kilometres, which is equal to 14% of mainland Australia. The Basin includes 75% of New South Wales, more than 50% of Victoria, 15% of Queensland, 8% of South Australia, and all of the Australian Capital Territory. Climate change is increasing flood risks in Europe As humans continue to emit greenhouse gases like carbon dioxide, the world continues to warm. We see that warming everywhere – in the atmosphere, in the oceans, with rising sea levels, and melting ice. But while we know conclusively that humans are causing the warming, an equally important question is, “so what?” Really, we want to know the consequences of warming so that we can make informed decisions about what to do about it.

Global water scarcity information for young people Introduction to global water scarcity For many people, water has never been a big story in their lives. This is because they live in communities that have good water supply systems. They turn on the tap and clean water flows, everyday of the year. This makes it very difficult for people to appreciate how precious water is. Water is life. Plants, animals and humans all depend on this invaluable natural resource for life.

Flood Control - Stadt Leipzig Flood Control Management in Leipzig Situated at the intersection of three rivers, the Weiße Elster, Pleiße and Parthe, Leipzig has always been vulnerable to the danger of flooding. To combat this danger, the river beds have been expanded and mechanical flood control and diversion systems have been installed. Maps of Leipzig's flood hazard areas along the Weiße Elster and Parthe can be viewed at the Office of Environmental Protection. Water Conservation Resources - Water Corporation WA Water is the most precious resource on the planet; without it, no plant or animal could survive. In Australia, the world's driest inhabited continent, it is especially important that we conserve our water. As Western Australia (WA) continues to experience the effects of climate change and a growing population, it is important we work together to reduce our water consumption and become waterwise in our homes and gardens. Traditionally, WA has been reliant on dams to provide the majority of our water supply. Over the course of time, the amount of rainfall and water flowing into our dams has significantly reduced. We now source a large amount of our water from groundwater and sea water, which means supplying water to WA is more complicated and more expensive.

The countries hit hardest by extreme weather Nikolay Doychinov | AFP | Getty Images An historic agreement may have been reached at the United Nations Climate Change conference in Paris late last year, but that could prove too late for some countries. Sustainable Energy has taken a look at international think tank Germanwatch’s Global Climate Risk Index for 2016, part of which profiles the countries most affected by “extreme weather events” in 2014.

More storms and flooding: How we′ll need to adapt to extreme weather Deutsche Welle: France has declared a state of natural disaster in some areas, people have had to be evacuated from Germany, some people have died as a result of the storms and flooding here. Is this a taste of more to come? Maarten van Aalst: In general, we are seeing an increase around the world of the risk of a range of types of extremes, including rainfall extremes that may cause flooding events like what we have here.