How to Worry Less About Money 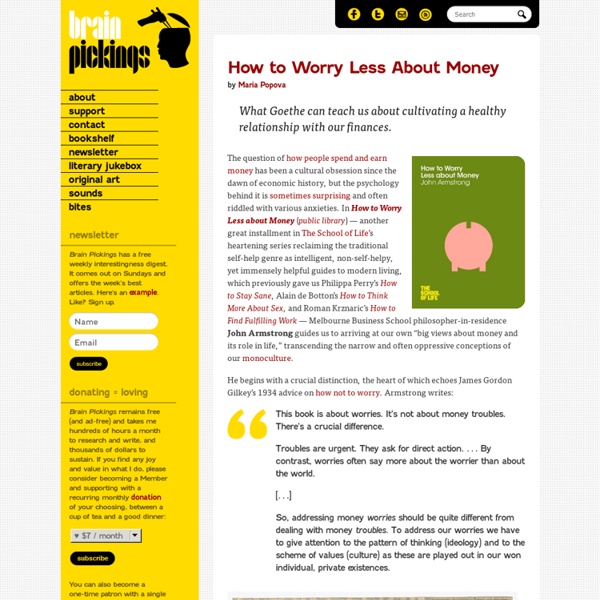 by Maria Popova What Goethe can teach us about cultivating a healthy relationship with our finances. The question of how people spend and earn money has been a cultural obsession since the dawn of economic history, but the psychology behind it is sometimes surprising and often riddled with various anxieties. In How to Worry Less about Money (public library) — another great installment in The School of Life’s heartening series reclaiming the traditional self-help genre as intelligent, non-self-helpy, yet immensely helpful guides to modern living, which previously gave us Philippa Perry’s How to Stay Sane, Alain de Botton’s How to Think More About Sex, and Roman Krznaric’s How to Find Fulfilling Work — Melbourne Business School philosopher-in-residence John Armstrong guides us to arriving at our own “big views about money and its role in life,” transcending the narrow and often oppressive conceptions of our monoculture. This book is about worries. It’s not about money troubles. The U.S.

MEGA Marx: Berfrois Interviews Jonathan Sperber by Russell Bennetts Jonathan Sperber is a social historian and Curators’ Professor of History at the University of Missouri. His most recent publication is Karl Marx: A Nineteenth-Century Life. NASA Models Predict Total Societal Collapse: "Irreversible" The end of the world as we know it is coming. You’ve likely heard this before, especially from the growing number of voices in the alternative news and preparedness communities. Often dismissed as conspiracy theory or outright lunacy, there is a growing body of evidence that suggests these fringe thinkers may well be on to something.

What Is Love? Famous Definitions from 400 Years of Literary History by Maria Popova “Love has nothing to do with what you are expecting to get — only with what you are expecting to give — which is everything.” After those collections of notable definitions of art, science, and philosophy, what better way to start a new year than with a selection of poetic definitions of a peculiar phenomenon that is at once more amorphous than art, more single-minded than science, and more philosophical than philosophy itself? the poststructural anarchist Todd May interviewed by Richard Marshall. Todd May is the poststructuralist anarchist who thinks anarchism is more than just a critique of the state, that there is more than one struggle, that Foucault, Deleuze and Lyotard are important, that postructuralism is elusive, that anarchism is bottom-up and liberalism is top-down, that ‘how might one live?’ is the down and dirty question, that Foucault’s thought will remain standing when the dust is settled, that what it means to be human is a matter of practices, that Ranciere gets him emotionally, that friendship offers a different model from neo-liberalism and that his conception is about resistance not cohesion. High Five!

Healing the Body with Mindfulness of Breathing « Metta Refuge This excerpt from a talk by Zen Master Thich Nhat Hanh explains how to use mindfulness of breathing to bring loving-kindness to our dear bodies. The physical effect of this can be truly remarkable. As Thây says, “You should really love your body. You should really take care of your body. Mindful breathing, with rest, can do miracles Excerpt: 'Struggle and Utopia at the End Times of Philosophy' by François Laruelle Armageddon, Joseph Paul Pettit, 1852 From The End Times of Philosophy: The phrase “end times of philosophy” is not a new version of the “end of philosophy” or the “end of history,” themes which have become quite vulgar and nourish all hopes of revenge and powerlessness. Moreover, philosophy itself does not stop proclaiming its own death, admitting itself to be half dead and doing nothing but providing ammunition for its adversaries. With our sights set on clearing up this nuance, we differentiate philosophy as an institutional entity, and the philosophizability of the World and History, of “thought-world,” which universalizes the narrow concept of philosophy and that of “capital.” We also give an eschatological and apocalyptical cause to this end, of “times” or “ages” rather than those of philosophical practice.

Stop Being Tortured by Your Own Thoughts - Joseph M. Carver, PhD Serious depression can occur under many circumstances but most commonly is present in these two situations: Sudden Severe Loss In this situation, the individual has experienced a sudden, perhaps surprising severe loss. This loss may be the death of a loved one, loss of a job, loss of friendship, or other grief process. Jonathan Lear: A Lost Conception of Irony Crow Indians, photograph by David F. Barry, c.1878 by Jonathan Lear On the face of it, a conception does not seem the sort of thing it is easy to lose. If we think of our life with concepts in terms of our ways of going on, categorizing and thinking about the phenomena in the world, including ourselves, then it makes sense that certain concepts might lose their viability for us, and thus fall out of use.