The Legacy of Dr. Maya Angelou 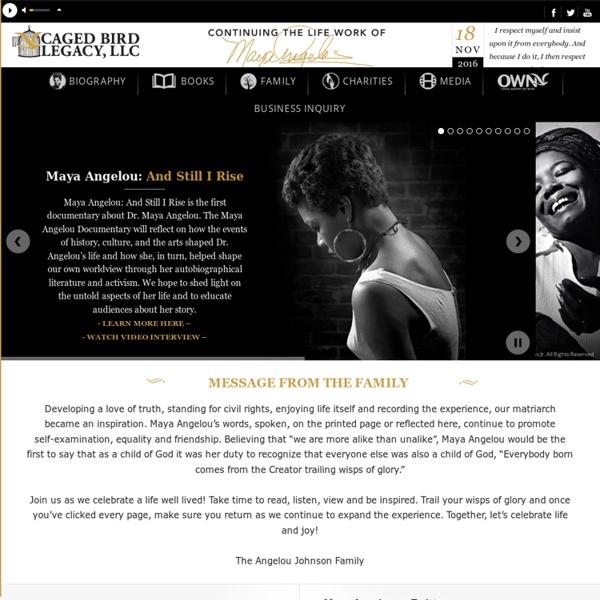 Dr. Maya Angelou is a remarkable Renaissance woman who is hailed as one of the great voices of contemporary literature. As a poet, educator, historian, best-selling author, actress, playwright, civil-rights activist, producer and director, she continues to travel the world, spreading her legendary wisdom. Within the rhythm of her poetry and elegance of her prose lies Angelou's unique power to help readers of every orientation span the lines of race. Angelou captivates audiences through the vigor and sheer beauty of her words and lyrics.

Martin Luther King I Have a Dream Speech - American Rhetoric Martin Luther King, Jr. I Have a Dream delivered 28 August 1963, at the Lincoln Memorial, Washington D.C. Video Purchase Why Maya Angelou Disliked Modesty - Dawn Reiss “You may now kiss my cheek,” said Maya Angelou. Her deep voice hung in the air, filling the large dining room inside of her Harlem home. Stunned, I sat there for a minute. I had never been asked at the end of an interview to kiss someone else’s cheek. It was October 2008 and I had flown to New York after haggling for months for an interview for an in-flight magazine cover story. Prior to the interview, a set of “communication courtesy” instructions for meeting Angelou were emailed to me, much like a list I imagine boarding schools send out to students for review before making an appearance.

Media Standards Trust » Churnalism.com Churnalism.com is an independent, non-profit website built and run by the Media Standards Trust to help the public distinguish between original journalism and ‘churnalism’.‘Churnalism’ is a news article that is published as journalism, but is essentially a press release without much added. In his landmark book, Flat Earth News, Nick Davies wrote how ‘churnalism’ is produced by: “Journalists who are no longer gathering news but are reduced instead to passive processors of whatever material comes their way, churning out stories, whether real event or PR artifice, important or trivial, true or false” (p.59). The Frankfurt school, part 4: Herbert Marcuse When the student generation took off in the 1960s across Europe, in Germany at least it was Herbert Marcuse who had the greatest influence. This is because whereas Adorno, with his highly pessimistic philosophical statements about historical development, could talk about a negative progression of humanity from the "slingshot to the megaton bomb", Marcuse continued to maintain a more optimistic view of what could be achieved. Indeed, when 1968 happened, Marcuse said that he was happy to say that all of their theories had been proved completely wrong. Also, Marcuse wrote in a far more accessible way about the ways in which philosophy and politics were intertwined. How was it, Marcuse asked, that the totalising administered state, which he saw at work in western societies, got away with it? It did this through what he called "repressive tolerance".

Stories by Edgar Allan Poe, The Tell-Tale Heart, The Black Cat, and more welcome biography quotes summaries stories poetry forum gallery timeline wordlist guestbook bookstore links credits contact Short Stories by Edgar Allan Poe This is not a complete list of works by Poe. These are my favorite stories and ones I feel are important and should be read by more people. Several sites listed on the links page have complete collections of Poe's works online. If you can't decide which story to read first, try browsing the summaries page. The School of Life London Life’s too short for bad books – but with a new book published every 30 seconds, it can be hard to know where to start. That’s why The School of Life set up a bibliotherapy service: to guide you to those amazing but often elusive works of literature, both past and present, that have the power to enchant, enrich and inspire. In a consultation with one of our bibliotherapists, you'll explore your relationship with books so far and be asked to explore new literary directions. Perhaps you're looking for an author whose style you love so much you will want to devour every word they've ever written.

Portrait of an INTP As an INTP, your primary mode of living is focused internally, where you deal with things rationally and logically. Your secondary mode is external, where you take things in primarily via your intuition. INTPs live in the world of theoretical possibilities. They see everything in terms of how it could be improved, or what it could be turned into. They live primarily inside their own minds, having the ability to analyze difficult problems, identify patterns, and come up with logical explanations. Obituary: John Kenneth Galbraith John Kenneth Galbraith was by far the most famous economic thinker of his day. Populist and media-friendly, he used television to explain and defend his liberal ideas. "Only the community," he once said, "reflects the wellbeing, maybe even the survival, of all people."

134, Toni Morrison Toni Morrison, ca. 2008. Photograph by Angela Radulescu Toni Morrison detests being called a “poetic writer.” She seems to think that the attention that has been paid to the lyricism of her work marginalizes her talent and denies her stories their power and resonance. As one of the few novelists whose work is both popular and critically acclaimed, she can afford the luxury of choosing what praise to accept.