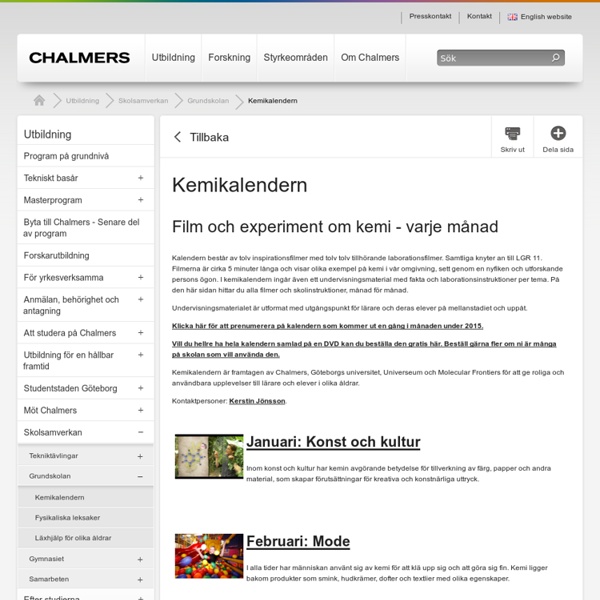 20+ Home Science Projects for Kids 52.6k Shares Here are 20+ awesome and FUN Home Science Projects for Kids! These have ALL been tried and tested by ourselves and our kids – we hope you will enjoy them all as much as we have! Learn How Plants Absorb Water – a FUN way for kids to witness how plants absorb water and nutrients!DIY Lava Lamp Experiment – this was so much bubbly FUN!Make your own Magic Aqua Sand! (1) StudiSverige - YouTube Categories Pinterest Log in More to explore: Fossil Energy: Squeezing Oil Out of Rock Imagine trying to force oil through a rock. Can't be done, you say? Actually, it can. In fact, oil droplets can squeeze through the tiny pores of underground rock on their own, pushed by the tremendous pressures that exist deep beneath the surface. How does this happen? Imagine a balloon, blown up to its fullest.

Science Experiment: Liquid Rainbow in a Jar By Jessica Vician Photography by Jennifer Shaffer Photography Children love science, whether they know it or not. From inventing little contraptions with things they find around the house to watching what food coloring can do to hard-boiled eggs or some cake icing, activities influenced by science fascinate children of all ages. Make a Recycled Lava Lamp with Your Kids Last time I went on a household cleaning spree, I decided to clean out our family medicine cabinets. I found a lot of items left behind from previous house guests, items that my family doesn't use - but I didn't want to toss them in the trash. I started considering creative ways that I could use them. When I came across a package of Alka-Seltzer, I figured that since it fizzes and bubbles when added to water, I could use them to make lava lamps with the boys.

This awesome periodic table shows the origins of every atom in your body Here’s something to think about: the average adult human is made up of 7,000,000,000,000,000,000,000,000,000 (7 octillion) atoms, and most of them are hydrogen - the most common element in the Universe, produced by the Big Bang 13.8 billion years ago. The rest of those atoms were forged by ancient stars merging and exploding billions of years after the formation of the Universe, and a tiny amount can be attributed to cosmic rays - high-energy radiation that mostly originates from somewhere outside the Solar System. As astronomer Carl Sagan once said in an episode of Cosmos, "The nitrogen in our DNA, the calcium in our teeth, the iron in our blood, the carbon in our apple pies were made in the interiors of collapsing stars. We are made of starstuff." To give you a better idea of where the ingredients for every living human came from, Jennifer A.

This awesome periodic table tells you how to actually use all those elements Thanks to high school, we’ve all got a pretty good idea about what’s on the periodic table. But whether you’re looking at something common like calcium, iron, and carbon, or something more obscure like krypton and antimony, how well do you know their functions? Could you name just one practical application for vanadium or ruthenium? Lucky for us, Keith Enevoldsen from elements.wlonk.com has come up with this awesome periodic table that gives you at least one example for every single element (except for those weird superheavy elements that don’t actually exist in nature). There’s thulium for laser eye surgery, cerium for lighter flints, and krypton for flashlights. You’ve got strontium for fireworks, and xenon for high-intensity lamps inside lighthouses.

6th Grade Science Projects for the Classroom or Science Fair Kids of every age love hands-on science! Teachers do, too, because the learning is a lot more meaningful when students see concepts in action. This roundup of sixth grade science experiments and activities has a little something for everyone–from biology and ecology to physics and chemistry. Bring on the science! 1. Build a Ferris Wheel

Cell Size and Scale Some cells are visible to the unaided eye The smallest objects that the unaided human eye can see are about 0.1 mm long. That means that under the right conditions, you might be able to see an amoeba proteus, a human egg, and a paramecium without using magnification. A magnifying glass can help you to see them more clearly, but they will still look tiny. Smaller cells are easily visible under a light microscope. It's even possible to make out structures within the cell, such as the nucleus, mitochondria and chloroplasts.