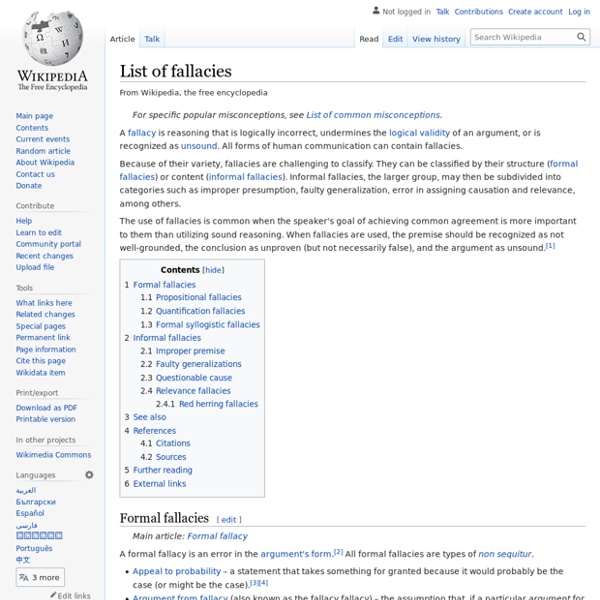 Relatively Interesting Logical Fallacies in the Lab - Relatively Interesting Errors in reasoning aren’t limited to just us regular folk. Even highly educated scientists – who are taught how to think and are taught how to follow the scientific method – are not immune to committing logical fallacies. Unbeknownst to us, biases find a way to creep into into our thoughts and eventually into the arguments we make. It takes a a lot of effort to avoid using logical fallacies. But understanding them is essential to making rational and reasonable decisions in life. The Upturned Microscope Presents: Logical Fallacies in the Lab, of all places, with a few of our favorites being: For those work work in the lab doing science-y things, you’ll appreciate these even more. Source: The Upturned Microscope

Thou shalt not bore ETHICS MAN | Culture | The Independent IT HAS BEEN more than 10 years since the disaster at Hillsborough football stadium. Ninety-six football fans were crushed to death that afternoon; yet the final victim, 17-year-old Tony Bland, didn't actually die there - at least, not technically. He was trampled so badly that his chest caved in and his lungs collapsed. Cut off from its oxygen supply, his cerebral cortex was destroyed within minutes. Four years later, this is how Lord Justice Hoffman described his condition: "Since April 15, 1989, Anthony Bland has been in a persistent vegetative state. The justices decided not to let that happen. "The day had to come, just as the day had to come when Copernicus proved that the earth is not at the centre of the universe," Singer told me not long ago. Singer is a lean, rangy 53-year-old, with a broad forehead and a ring of hair around his balding head which shoots in wisps straight into the air. Singer's beliefs have led him to places where few others are willing to go.

5 Kinds of Nonbusiness Books Every Entrepreneur Needs to Read Scan the unavoidable lists of things successful entrepreneurs have in common and you’ll soon see the importance of books. Pretty much every entrepreneur who has ever reached an enviable level of success will cite reading as an essential daily habit. Related: 9 Books Elon Musk Thinks Everyone Should Read Of course we assume that they read books on business, and probably they do. But business isn't the only genre spilling off those shelves and piling up on my night table. 1. Right now Supersurvivors: The Surprising Link Between Suffering and Success is the one taking up space on my reading table and in my head. These true stories pretty much rip apart our notions about positive thinking, emotional support and the setting of goals and expectations. 2. We depend on words for pretty much everything in business and in life. Related: 50 Global Entrepreneurs Recommend 50 Books That Forever Impacted Their Lives 3. 4. F. 5. More than any other source, stories teach us lessons we will never forget.

Chilcot: Why we cover our ears to the facts Image copyright Getty Images Do people moderate their views when presented with overwhelming evidence to the contrary? Not necessarily, writes Matthew Syed. We like to think that we apportion our beliefs to the evidence. Or do we? Consider an experiment, where two groups were recruited. These groups were then showed two dossiers. Image copyright iStock Now you might suppose that, confronted by this contradictory evidence, the two groups would have concluded that capital punishment is a complex subject with arguments on both sides. When asked about their attitudes afterwards, those in favour of capital punishment said they were impressed with the dossier citing evidence in line with their views. The opposite conclusions were drawn by those against capital punishment. What this (and dozens of other experiments) reveal is the way we filter new information when it challenges our strongly-held beliefs or judgements. This tendency is called "cognitive dissonance". Image copyright AP

Real concerns about fake news and staged photos | Letters | Media How can you run news items and comment on false news (A challenge to Facebook’s reach and power is overdue, 9 December), while the front page of the very same edition bears a false photo of the US president-elect cavorting with, apparently, Ku Klux Klan members? Donald Trump may or not be a supporter of this organisation and they in turn may or may not be supporters of his. But the clear message of the photo, without any prominent indication that it is false, presents unambiguous positive answers to these implied questions. I fly no flag for Trump, whatever the answers are in truth, but as a signed-up supporter of your publication’s objective of “producing quality, independent journalism, which discovers and tells readers the truth”, I would have expected better of you. • Isn’t the front page prominence given to a photo of Donald Trump apparently embracing Klan members an instance of the fake news the pope is warning about? • Fake news is of very real concern.

Bertrand Russell: The Value of Philosophy Chapter XV of The Problems of Philosophy Having now come to the end of our brief and very incomplete review of the problems of philosophy, it will be well to consider, in conclusion, what is the value of philosophy and why it ought to be studied. It is the more necessary to consider this question, in view of the fact that many men, under the influence of science or of practical affairs, are inclined to doubt whether philosophy is anything better than innocent but useless trifling, hair-splitting distinctions, and controversies on matters concerning which knowledge is impossible. This view of philosophy appears to result, partly from a wrong conception of the ends of life, partly from a wrong conception of the kind of goods which philosophy strives to achieve. But further, if we are not to fail in our endeavour to determine the value of philosophy, we must first free our minds from the prejudices of what are wrongly called 'practical' men.

Videos Hans Rosling explains a very common misunderstanding about the world: That saving the poor children leads to overpopulation. Not only is it not right, it’s the other way around! The world might not be as bad as you might believe! “Don’t Panic” is a one-hour long documentary produced by Wingspan Productions and Read more … Hans Rosling is debunking the River of Myths about the developing world. By measuring the progress in the once labeled “developing countries”, preventable child mortality can be history by the year 2030. Instead of studying history one year at the university, you can watch this video for less than five minutes. Explaining the global vaccination programs is NOT a party-killer! Is there a relation between religion, sex and the number of babies per woman? What was the greatest invention of the industrial revolution? Hans Rosling uses Gapminder bubbles in CNN Global Public Square to show US converge with other countries. TED-talk at the US State Department. The urban challenge.

Capital - How to stop lying to yourself Newly divorced, Eleanor Bain thought she’d finally met the man of her dreams. She was in a new city, looking for a new job and starting a new life with her two daughters, when she fell in love, or so she thought. It’s like a boomerang, when you suddenly realise that this is not so peachy But along with the positives of shared interests, there were plenty of negatives. Looking back, Bain says she was in denial about the relationship. Why do we do it? Delusion may make day-to-day living easier, but it usually comes at a price, according to Cam Caldwell, a visiting professor of management at Purdue University North Central, Indiana in the US, who has been researching identity, self-awareness and self-deception for decades. For those who want to avoid burying their heads in the sand, ask yourself this question: What’s worse – a little bad news about your actual situation, or a ‘business as usual’ approach that leads to a train wreck for your partnership, your money or your career?