World War One: 10 interpretations of who started WW1 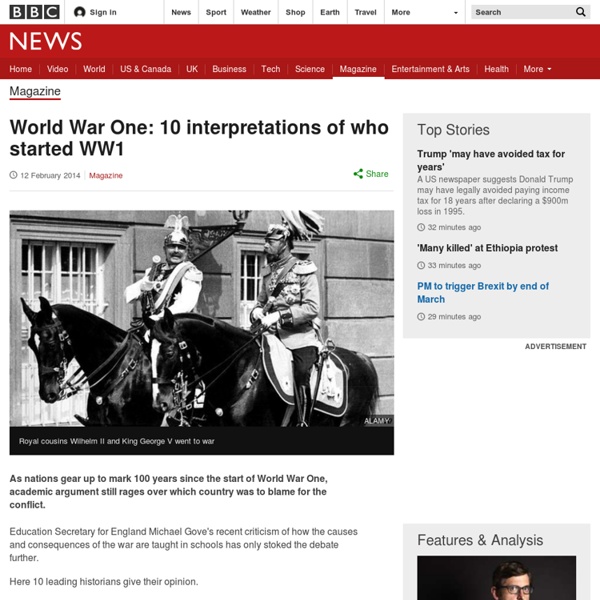 Image copyright Alamy As nations gear up to mark 100 years since the start of World War One, academic argument still rages over which country was to blame for the conflict. Education Secretary for England Michael Gove's recent criticism of how the causes and consequences of the war are taught in schools has only stoked the debate further. Here 10 leading historians give their opinion. Sir Max Hastings - military historian Germany No one nation deserves all responsibility for the outbreak of war, but Germany seems to me to deserve most. It alone had power to halt the descent to disaster at any time in July 1914 by withdrawing its "blank cheque" which offered support to Austria for its invasion of Serbia. I'm afraid I am unconvinced by the argument that Serbia was a rogue state which deserved its nemesis at Austria's hands. The question of whether Britain was obliged to join the European conflict which became inevitable by 1 August is almost a separate issue. Serbia Image copyright Getty Images

How did soldiers cope with war? - The British Library Curator Dr Matthew Shaw, explores notions of patriotism, social cohesion, routine and propaganda, to ask how soldiers of World War One were able to psychologically cope with the realities of combat. Introduction Given our understanding of the horrors of war, it is often difficult to understand how men coped with life at the Front during the First World War. Many, of course, did not: it is during this period that shell shock and what we now know as post-traumatic stress disorder were first described and diagnosed . Hundreds, across all the armies involved in the war, deserted, and both sides faced large mutinies – among the French in 1917 and by the German navy in 1918, as well the Russian Revolution in 1917. What the Spanish civil war can reveal about Syria As the battle for Aleppo continues unabated, this intense episode in the Syrian civil war harkens back to a vicious battle for another Mediterranean city, Barcelona, during the Spanish civil war. July 2016 marked the 80-year anniversary of the outbreak of the conflict in Spain, lasting from 1936 to 1939. In July 1936, General Francisco Franco led a rebellion among the Spanish military and his allies, collectively referred to as the Nationalists, against the recently elected left leaning Republican Government.

The debate on the origins of World War One - The British Library Beginning with the assassination of Archduke Franz Ferdinand, Dr Annika Mombauer explores the opposing debates about the origins of World War One. Is it possible for historians to arrive at a consensus? The hundred-year debate Lesson: Nat. of Sci. mini-lesson: Checks Lab Before Doing this lab, consider doing the NEW High-Tech Version: The E-Mail Lab. (Details below under EXTENSIONS AND VARIATIONS. TEACHER PREPARATIONS: 1. Because this lesson provides an excellent opportunity to understand important elements of the Nature of Science , be sure to read our General Background Information, with our Rationale and our Approach, and tips for Presenting the lessons for maximum effect and Dispelling some of the popular myths about science. 2. In any of the discussions expected with the class, select a few key items (important concepts) that lend themselves to interpretation, and introduce class to the Think-Pair-Share (TPS) routine dealing with those items.

The fall of the Berlin Wall: what it meant to be there We throw chocolates up to the putty-faced East German frontier troops, as they stand guard – against whom? defending what? – atop a Wall that since yesterday has become useless. They push the chocs away with their boots. One of the West Berliners standing next to me tries again: “Wouldn’t you like a West-cigarette?” Sheepish refusal.

The Inevitable, Intergalactic Awkwardness of Time Capsules The Golden Record is affixed to the Voyager 1 spacecraft, 29 July 1979. (Photo: NASA/Public Domain) The year is… let's say it's 42026. You're cruising along your regular orbit, minding your own business, when suddenly, your craft's detection system registers a mysterious interloper. An image of it blinks onscreen: It's unshielded, it's oddly shaped, and it's not showing up in any of the databases. From a distance, it looks like one for the junk heap—cheap metal, outdated design, and judging from its 17,000 meter-per-second approach, slower than anything else in the galaxy.

The Berlin Wall: A Secret History The Berlin Wall was a tangible symbol of the suppression of human rights by the Eastern bloc during the Cold War, but Frederick Taylor asks whether it was more convenient to the Western democracies than their rhetoric suggested. The Fall of the Berlin Wall, 1989. The photo shows a part of a public photo documentation wall at Former Check Point Charlie, Berlin.The building of the Berlin Wall in August 1961 divided families and neighbourhoods in what had been the capital of Germany. The Wall represents a uniquely squalid, violent, and ultimately futile, episode in the post-war world. Letter from Africa: Why Nigerians need to learn their history Image copyright AFP In our series of letters from African journalists, Sola Odunfa looks at why it is a good idea for Nigeria to reintroduce history as a school subject - a move recently backed by the country's senate. When I was growing up, one of the subjects I learnt in both primary and secondary school was history - not only of Nigeria but also of Europe. The bare facts of the growth of nationalities might not have been interesting to my young mind but I grew up with the conviction that hardly anything could be more exciting than the study of the exploits of men and women who later became heroes - or villains - among their people as they shaped the course of history either in their local areas or in the world at large. A long ago, I read in history books of the conquest of the Ilorin people in the central Kwara State, by Fulani forces from Sokoto under Shehu Alimi following the betrayal of the Alafin of Oyo by his former warlord, Afonja.

Six unexpected WW1 battlegrounds 25 November 2014Last updated at 19:23 ET The famine of Lebanon resulted in 200,000 deaths Not all crucial battles in World War One took place on the muddy fields of Europe. Some significant fights took place in little-known places much further afield, says the BBC's Deborah Basckin. The Somme, Ypres, Passchendaele, all iconic battles of WW1.