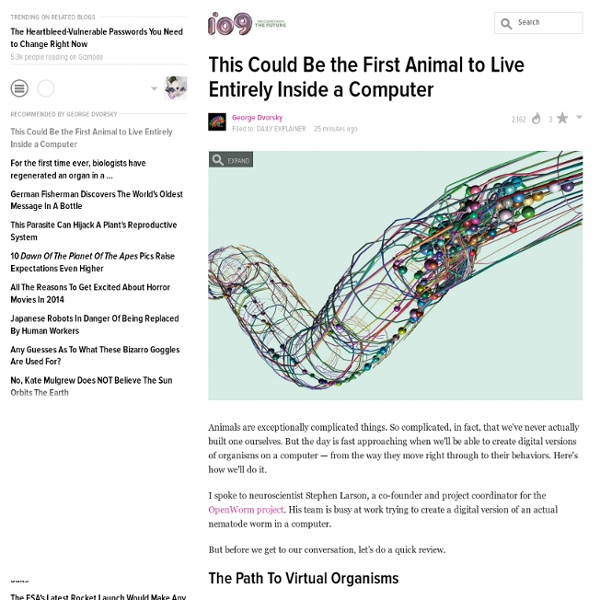 DNA nanobots deliver drugs in living cockroaches - health - 08 April 2014 It's a computer – inside a cockroach. Nano-sized entities made of DNA that are able to perform the same kind of logic operations as a silicon-based computer have been introduced into a living animal. The DNA computers – known as origami robots because they work by folding and unfolding strands of DNA – travel around the insect's body and interact with each other, as well as the insect's cells. When they uncurl, they can dispense drugs carried in their folds. "DNA nanorobots could potentially carry out complex programs that could one day be used to diagnose or treat diseases with unprecedented sophistication," says Daniel Levner, a bioengineer at the Wyss Institute at Harvard University. Levner and his colleagues at Bar Ilan University in Ramat-Gan, Israel, made the nanobots by exploiting the binding properties of DNA.

Skype’s new service is like a Star Trek universal translator for the real world Star Trek Captains Picard and Kirk could talk to any alien, no matter how different it was from humanity, thanks to the universal translator, a magical sci-fi device that explained away why strange civilizations in far-away solar systems all spoke English. That future just got a little less far-fetched, thanks to Skype Translator, a new preview service that uses technology from Microsoft Research to translate two different languages back and forth in real time. This is heady stuff, as school kids in Seattle and Mexico City seem to instantly recognize when they chat back and forth in English and Spanish via the Skype service in the video below. Murderpedia, the encyclopedia of murderers In 1981, Jernigan was sentenced to death for stabbing and shooting 75-year-old Edward Hale, who discovered him stealing a microwave oven. Jernigan spent 12 years in prison before his final plea for clemency was denied. At the prompting of a prison chaplain, he agreed to donate his body for scientific research or medical use. His cadaver was sectioned and photographed for the Visible Human Project. He is the subject of an HBO documentary Virtual Corpse.

nodeschool.io Functional Javascript Learn fundamental functional programming features of JavaScript in vanilla ES5. npm install -g functional-javascript-workshop Level Me Up Scotty! Lab-Grown Model Brains Cross-section of cerebral organoid; All cells in blue, neural stem cells in red, and neurons in green. MADELINE A. LANCASTERIn an Austrian laboratory, a team of scientists has grown three-dimensional models of embryonic human brains. These “cerebral organoids” are made from stem cells, which are simply bathed in the right cocktail of nutrients and grown in a spinning chamber. Over a few weeks, they arrange themselves into pea-sized balls of white tissue, which recapitulate some of the complex features of a growing brain, including distinct layers and regions. “This demonstrates the enormous self-organizing power of human cells,” said Jürgen Knoblich from the Institute of Molecular Biotechnology of the Austrian Academy of Science, who led the study published in Nature today (August 28).

Self-healing engineered muscle grown in ‘bionic mouse’ Engineered muscle fiber stained to observe growth after implantation into a mouse (credit: Duke University) Duke University biomedical engineers have grown living skeletal muscle that resembles the real thing. It contracts powerfully and rapidly, integrates into mice quickly, and for the first time, demonstrates the ability to heal itself both inside the laboratory and inside an animal. Another startup steps up to build the hyperloop Hyperloop Technologies, a startup formed by SpaceX alumni and well-known Silicon Valley executives, came out of stealth with $8.5 million on Wednesday to make the hyperloop reality, according to a report in Forbes. The hyperloop, a transportation system that would send capsules large enough to contain people or goods through tubes at 760 miles per hour, originated with a paper published by SpaceX CEO Elon Musk and his team in 2013, but Musk said at the time that he didn’t have the time to pursue building it. He announced plans to build a test track last month. That paper contained enough details for others to go after their own plans, and Hyperloop Technologies is the first to come up with actual money. On top of that $8.5 million, it plans to raise an $80 million funding round before the year is up, according to Forbes. Unlike Musk, the team initially sees the hyperloop carrying cargo instead of passengers.

1993: Joseph Paul Jernigan, Visible Human Project subject August 5th, 2013 Headsman On this date in 1993, Joseph Paul Jernigan died by lethal injection in Texas. Yet he lives on still. A career burglar, Jernigan was surprised mid-robbery in 1981 by 75-year-old Edward Hale: the thief promptly shot the homeowner dead, then finished his looting. Francis Heylighen Francis Paul Heylighen (born 1960) is a Belgian cyberneticist investigating the emergence and evolution of intelligent organization. He presently works as a research professor at the Vrije Universiteit Brussel, the Dutch-speaking Free University of Brussels, where he directs the transdisciplinary research group on "Evolution, Complexity and Cognition"[1][2] and the Global Brain Institute. He is best known for his work on the Principia Cybernetica Project, his model of the Internet as a Global brain, and his contributions to the theories of memetics and self-organization. Biography[edit] Francis Heylighen was born on September 27, 1960 in Vilvoorde, Belgium.