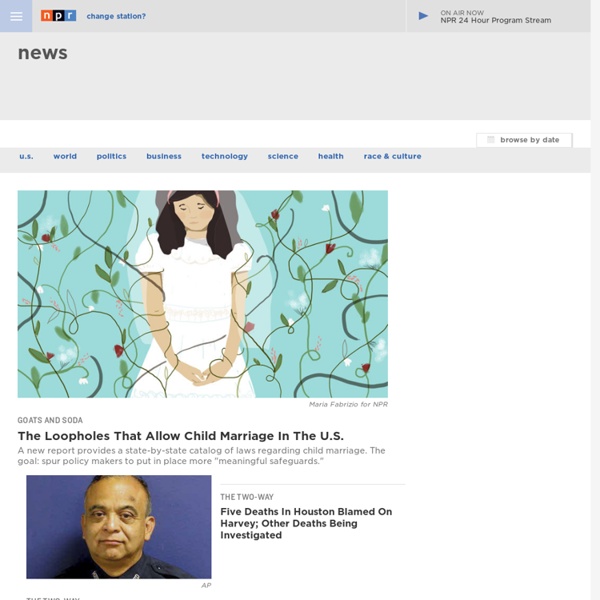 Ask not for whom the wolf stalks ... View captionHolly Kuchera/IStockphoto When Big Carnivores Go Down, Even Vegetarians Take The Hit A drop in the numbers of fierce beasts worldwide might seem good news for deer and antelope — at first. But expanding herds of grass-eaters leave streambanks naked and vulnerable to erosion, and can even change the stream's course, according to scientists calling for more protection of large predators. The Salt

16 skills students need to learn today to thrive tomorrow The gap between the skills people learn and the skills people need is becoming more obvious, as traditional learning falls short of equipping students with the knowledge they need to thrive, according to the World Economic Forum report New Vision for Education: Fostering Social and Emotional Learning Through Technology. Today's job candidates must be able to collaborate, communicate and solve problems – skills developed mainly through social and emotional learning (SEL). Combined with traditional skills, this social and emotional proficiency will equip students to succeed in the evolving digital economy. What skills will be needed most? An analysis of 213 studies showed that students who received SEL instruction had achievement scores that averaged 11 percentile points higher than those who did not. And SEL potentially leads to long-term benefits such as higher rates of employment and educational fulfillment.

The Center for MichiganThe Detroit Historical Museum wants your story from the summer of ‘67 What were you doing during Detroit’s 1967 civil disorder? If you had a “significant, first-hand experience” with the uprisings in the last week in July that year, the Detroit Historical Museum wants to hear your story for an oral history project it’s conducting in the run-up to the riot’s 50th anniversary next summer. The Detroit museum will have interviewers on hand to record your recollections this Saturday, Aug. 20, between 10 a.m. and 3 p.m. The stories will become part of the museum’s “Detroit 67: Looking Back to Move Forward,” which seeks to assemble a record of what Detroiters and suburbanites were doing during one of the most momentous weeks in Detroit’s 315-year history. Get English Lessons Metronews, info en direct. Actualité, Sport, Culture, Hi-Tech – metronews

Internet Archive: About IA The Internet Archive, a 501(c)(3) non-profit, is building a digital library of Internet sites and other cultural artifacts in digital form. Like a paper library, we provide free access to researchers, historians, scholars, the print disabled, and the general public. Our mission is to provide Universal Access to All Knowledge. Books for beginning readers of all ages Ossian Sweet defied segregation. Now his Detroit home will be a museum. The all-white jury couldn’t reach a verdict, and Frank Murphy, a future U.S. Supreme Court justice, declared a mistrial. After Henry Sweet was acquitted by another all-white jury, the charges against the rest were dismissed. ‘Transference of authority’ Baxter’s parents, William and Ruby, bought the house in 1958 for $15,000 after his mother recalled seeing it in a dream.