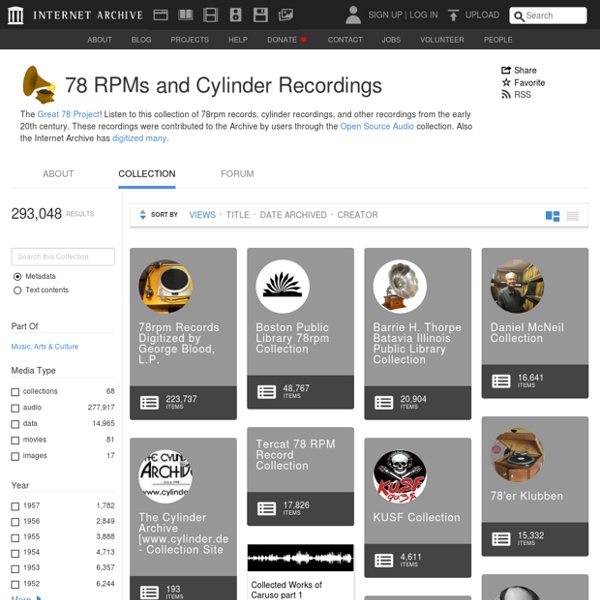 Women’s Choirs : California Choral Directors Association (CCDA) Welcome to CCDA’s Women’s Choir Repertoire and Resources resource page! Whether you’re a veteran of the treble realm or a newcomer wondering what to do without any tenors and basses, I hope you’ll find this page a useful source of ideas, connections, and inspiration. Consider this site an ever-evolving construction zone, and please feel free to let me know what you think belongs here! Where to find women’s-chorus literature Most publishers include treble-voice titles in their catalogs, but here are a few with especially wide and appealing selections—and a handful of off-the-beaten path possibilities! Treble Clef Press publishes exclusively upper-voice music.

ROCKABILLY ~ Radio Vintage - Rock 'n' Roll Rockabilly is one of the earliest styles of rock and roll music, dating to the early 1950s. The term rockabilly is a portmanteau of rock (from rock 'n' roll) and hillbilly, the latter a reference to the country music (often called hillbilly music in the 1940s and 1950s) that contributed strongly to the style's development. Other important influences on rockabilly include western swing, boogie woogie, and rhythm and blues. While there are notable exceptions, its origins lie primarily in the Southern United States.

The Story of Feminist Punk in 33 Songs By Vivien Goldman It’s punk, not spunk. So loaded towards males is the English language, though, that we may have to reinvent our whole vocabulary. Because some of the best words to describe our female punks are phallocentric: “spunky,” “ballsy.” Start calling us “cunts” or “pussies,” though, and it won’t go down so well. Safety Last, the 1923 Movie Featuring the Most Iconic Scene from Silent Film Era, Just Went Into the Public Domain Safety Last, the 1923 film starring Harold Lloyd, features one of the most iconic scenes from the silent film era. Writes Roger Ebert, the scene above is "by general agreement the most famous shot in silent comedy: a man in a straw hat and round horn-rim glasses, hanging from the minute hand of a clock 12 stories above the city street. Strange, that this shot occurs in a film few people have ever seen. Harold Lloyd's Safety Last (1923), like all of his films, was preserved by the comedian but rarely shown."

Perfect Quotes for Your Music Bulletin Board: Part 2 Perfect Quotes for Your Music Bulletin Board: Part 2 Music Quotes to Inspire: on practice, performance, and hard work If I don’t practice one day, I know it; two days, the critics know it; three days, the public knows it ~Jascha HeifetzPractice only on the days you eat! Creating complex smart playlists in iTunes Creating playlists in iTunes can be as simple as dragging a few songs, or as complex as creating smart playlists that refer to other playlists and use nested conditions to pick songs that meet specific criteria. In this week’s column, I answer three questions to show just how complex smart playlists can be. While perhaps not the same as the smart playlists you want to make, they are good examples of the complexity that is available with smart playlists in iTunes. Q: I have a collection of jazz music that is bigger than a single 160GB iPod classic can hold. In total, I have over 6800 albums on four iPods, so I will soon face this problem for other genres too.

September 2010 Gerald Pyne (Geraldo Pino) Jake Sollo (Nkem Okonkwo)- Hykkers and then The Funkees Tony Allen c.1977 Perfect Quotes for Your Music Bulletin Board: Part 1 Perfect Quotes for Your Music Bulletin Board: Part 1 Music quotes for your classroom wall: general We are the music makers and we are the dreamers of dreams. Your Furry Friend's Noise, Online & Free ♥ Not for nothing, the generator is pretty relaxing. I started using the website for ambient sound to keep me from getting stressed at work. Also, what's cool is when you shift the different controls, the purr begins to sound almost alien. ♥ Combining Furry Friend with Fire Noise makes it sound like I'm sitting by a fireplace with a content kitty nearby and it's amazing. Add in an open window with ambient summer noises and it sounds like we're chilling by a fire pit.

Pat Les Stache Re-Edit Collection Mp3's are for promotion and educational purposes only. The files posted are available for a limited time and are for personal use only. If there are any issues with any of the files posted, please let me know. Mal Webb Site-Workshops "I didn't think it possible: If I'd known I was going to be doing this, I would never have come; and thank God I didn't... and did!" -Wendy, after a Mal workshop at the Tasmanian Acappella Festival. Click here for workshop notes and beatbox phrases. For more videos, go to my YouTube channel: Vocal workshop: Lip to Lung, Larynx and Tongue. A Global Glottal Adventure: Bandmouth, Beatbox and Beyond Around the world and into your gob, vocal explorer and songwriter Mal Webb takes you on a lip to lung journey through the physics, physiology and phrivolity of all the sounds a face can make.

August 2010 We have some rare records which we only have the LP but no cover of. We will buy cover only or cover plus destroyed LP of the following records. Cliff Jordan - Cliff craft - Blue note 1582