Naomi Klein: How science is telling us all to revolt 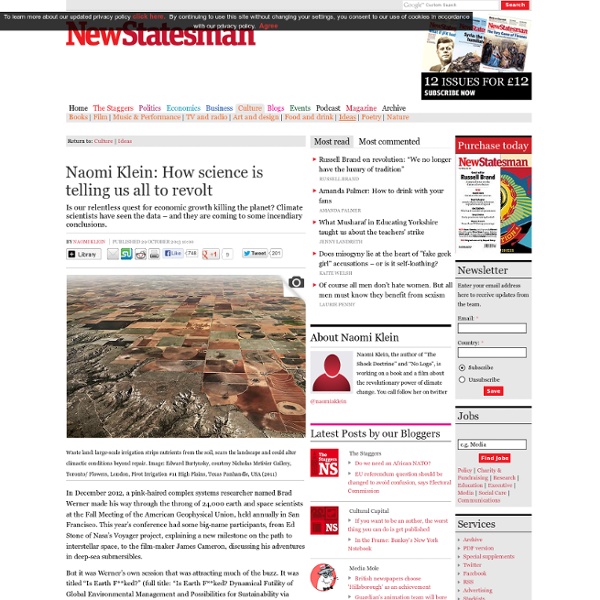 In December 2012, a pink-haired complex systems researcher named Brad Werner made his way through the throng of 24,000 earth and space scientists at the Fall Meeting of the American Geophysical Union, held annually in San Francisco. This year’s conference had some big-name participants, from Ed Stone of Nasa’s Voyager project, explaining a new milestone on the path to interstellar space, to the film-maker James Cameron, discussing his adventures in deep-sea submersibles. But it was Werner’s own session that was attracting much of the buzz. It was titled “Is Earth F**ked?” (full title: “Is Earth F**ked? Dynamical Futility of Global Environmental Management and Possibilities for Sustainability via Direct Action Activism”). Standing at the front of the conference room, the geophysicist from the University of California, San Diego walked the crowd through the advanced computer model he was using to answer that question. There was one dynamic in the model, however, that offered some hope.

Wealthy nations pledged billions to help the poor adapt to climate change. Where did it all go? One of the cruel ironies of climate change is that the poor countries that have contributed the least to the problem are expected to get hit the hardest. A woman and her children walk to the Transit Center to find water in Dolo Ado, Ethiopia. More than 300,000 refugees fled severe drought, conflict and famine in southern Somalia in 2011 into Ethiopia and Kenya (William Davies / AFP/Getty Images) Global emissions stall in 2014 following slowdown in China's economy A slowdown in China’s economic growth helped the world to a pause in the upward rise in greenhouse gas emissions last year, according to data released on Friday. China burnt less coal last year than expected, as the projected rise in its energy demand faltered along with the rise in its economic growth, and as the expansion of its renewable energy generation continued. Emissions of carbon dioxide related to energy use were flat in 2014, compared with the previous year, the International Energy Agency (IEA) said on Friday.

Donald Trump thinks climate change is a Chinese hoax. China begs to differ. And it’s just in the nick of time, since President-elect Trump has promised to repeal all of President Obama’s climate regulations. This rule, which will be gradually phased in, requires drilling operators to halve the natural gas that is flared off from new and existing wells, limit venting from storage tanks, inspect for leaks, and so on. DOI projects that the rule should cut methane emissions up to 35 percent.

'Debate on Science is Over, Time to Act Is Now': World Reacts to IPCC Report The new report further states that greenhouse gas emissions at or above current rates would induce changes in the oceans, ice caps, glaciers, the biosphere, and other components of the climate system. (Underlying photo: UNEP)Following the release of the IPCC's first installment of its fifth assessment report (AR5) on climate change in Stockholm on Friday, environmental groups, experts, and activists from around the world were reacting to the findings contained in the report and commenting on the implications it will or should have as the planet faces the "unprecedented" rate of global warming and the irrefutable consensus by the world's scientific community. For most, the report's findings represent only a more precise and updated affirmation of what has been known to most experts for decades.

The 9 limits of our planet … and how we’ve raced past 4 of them Johan Rockström says humanity has already raced past four of the nine boundaries keeping our planet hospitable to modern life. Writer John Carey digs into the “planetary boundary” theory — and why Rockström says his isn’t, actually, a doomsday message.We’ve been lucky, we humans: For many millennia, we’ve been on a pretty stable — and resilient — planet. As our civilizations developed, we’ve transformed the landscape by cutting down forests and growing crops. We’ve created pollution, and driven plants and animals extinct. Yet our planet has kept spinning along, supporting us, more or less stable and in balance. Going forward, scientists have recently proposed, all we need to do is stay within some limits, nine upper boundaries for bad behavior.

100-year-old expedition logbooks reveal Antarctic sea ice patterns In the early years of the 20th century, several teams of explorers were racing to reach a new frontier: the South Pole. During what's known as the Heroic Age of Antarctic Exploration, many explorers perished and the expeditions were fraught with failure, but their efforts were not in vain. Now, over a century later, their logbooks and journals have helped piece together a new discovery: Antarctic sea ice coverage may not be on a steady downward trend, but fluctuating over cycles lasting decades. Much of the bad news concerning melting ice is centered around the Arctic region, which is taking a solid beating.

How farmers can help fight climate change The other week, I spent some time interviewing several business leaders for the North Carolina Sustainability CEnter, asking them about their reactions to President Obama's climate speach. Their responses were decidedly mixed, but one discussion stayed with me. When I asked Charles Sydnor, the owner of Braeburn Farm, about the urgency of climate policy for his industry—he had this to say: "As a farmer, when we look at climate change there are two sides to the story – but we only really talk about one – namely the production of greenhouse gases. Yet agriculture should be part of the solution.