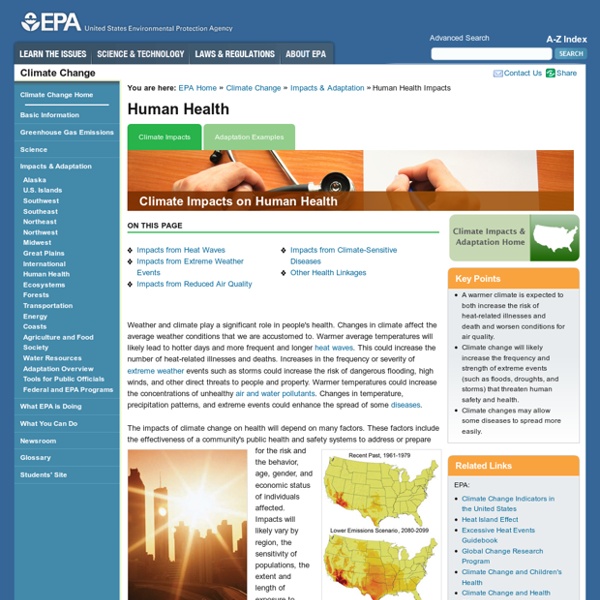 Climate Impacts on Human Health Climate Impacts on Alaska Key Points A warmer climate is expected to both increase the risk of heat-related illnesses and death and worsen conditions for air quality. Climate change will likely increase the frequency and strength of extreme events (such as floods, droughts, and storms) that threaten human safety and health. Sun setting over a city on a hot day. Weather and climate play a significant role in people's health. The impacts of climate change on health will depend on many factors. Although the United States has well-developed public health systems (compared with those of many developing countries), climate change will still likely affect many Americans. Top of page Impacts from Heat Waves Heat waves can lead to heat stroke and dehydration, and are the most common cause of weather-related deaths. [1] [2] Excessive heat is more likely to impact populations in northern latitudes where people are less prepared to cope with excessive temperatures. 1. Related:  Climate change/chaos • Climate change

Scientists in Revolt against Global Warming Global warming became a cause to save life on earth before it had a chance to become good science. The belief that fossil fuel use is an emergency destroying our planet by CO2 emissions took over the media and political arena by storm. The issue was politicized so quickly that the normal scientific process was stunted. We have never had a full, honest national debate on either the science or government policy issues. Everyone "knows" that global warming is true. What is never discussed is this: the theory of global warming has catastrophic implications for our economy and national security. President Obama has spoken out passionately on the danger of developing oil and gas because of man-made global warming. Obama calls for the debate to end. Happily, our president is wrong. More and more scientists are revolting against the global warming consensus enforced by government funding, the academic establishment, and media misrepresentation. It takes a lot of courage. In America, Dr. Dr.

Obama unveils major climate change proposal - CNNPolitics.com "Today after working with states and cities and power companies, the EPA is setting the first ever nationwide standards to end the limitless dumping of carbon pollution from power plants," Obama said Monday from the White House, adding shortly thereafter "Washington is starting to catch up with the vision of the rest of the country. " The "Clean Power Plan" is the final version of regulations by the Environmental Protection Agency, which President Barack Obama called "the biggest most important step we've ever taken to combat climate change," in a video released by the White House on social media Saturday night. "We're the first generation to feel the impact of climate change and the last generation that can do something about it," Obama said on Monday. Busted: 3 myths about Obama's climate plan (Opinion) Under the plan, the administration will require states to meet specific carbon emission reduction standards, based on their individual energy consumption. Former Florida Gov.

Australians fear Coalition is not taking climate change seriously, poll shows | Environment Australians are deeply worried the Abbott government is underestimating the importance of climate change, new polling shows, as cabinet debates crucial long-term targets for greenhouse gas reductions. The annual polling by the Climate Institute thinktank reveals Australians overwhelmingly support wind and solar energy – as the Coalition seeks to limit support for both – and see it as inevitable that coal-fired power stations will have to be phased out and replaced. But at the same time, almost half those surveyed (47%) think Labor’s carbon policies will “just increase electricity prices and not do much about pollution”. Federal cabinet will on Monday decide on the post-2020 emissions reduction target Australia will take to the UN Paris talks in December and the decision will then be presented to the Coalition party room. Labor has not promised bipartisan support to a “lowball” target but has also not yet outlined a costed policy to reach a long-term climate goal.

Climate talks need to address ocean warming and acidity threat. August 13, 2015 – Whatever we are doing to the atmosphere by adding greenhouse gases will take centuries to repair. But the damage to the ocean makes these atmospheric perturbations look like a sideshow. That’s because the ocean is our biggest carbon sink and filling it with carbon dioxide (CO2) is changing the pH balance making it more acidic with consequences for the life that is dependent upon it. In a recent study appearing in the journal Science, scientists measuring the cumulative impact of CO2 on the ocean predict by 2100 that pH levels will have fallen by 0.4, a 150% increase in ocean acidity since the mid-19th century when we first began keeping comprehensive records. For marine animals from corals to shellfish, and from fish to whales, acidification at this rate of change will have a negative impact. Extinction is the greatest threat posed by ocean acidification. A number of scientists think so. Unintended consequences of this type seeding include: So what can be done?

rollingstone Historians may look to 2015 as the year when shit really started hitting the fan. Some snapshots: In just the past few months, record-setting heat waves in Pakistan and India each killed more than 1,000 people. In Washington state's Olympic National Park, the rainforest caught fire for the first time in living memory. London reached 98 degrees Fahrenheit during the hottest July day ever recorded in the U.K.; The Guardian briefly had to pause its live blog of the heat wave because its computer servers overheated. On July 20th, James Hansen, the former NASA climatologist who brought climate change to the public's attention in the summer of 1988, issued a bombshell: He and a team of climate scientists had identified a newly important feedback mechanism off the coast of Antarctica that suggests mean sea levels could rise 10 times faster than previously predicted: 10 feet by 2065. Hansen's new study also shows how complicated and unpredictable climate change can be.

CO2 Now | CO2 Home Genesis Energy to close last coal-fired power stations in NZ Genesis Energy will retire its last two coal-burning generators by 2018. Photo: Bloomberg New Zealand is saying goodbye to coal-fired power generation, with Genesis Energy advising it will permanently shut its last two coal-burning generators by December 2018 amid ample supplies of cheaper renewable energy generation and subdued demand. Genesis chairman Dame Jenny Shipley said that with improved management of hydroelectric capacity in dry years, the two coal generators at Huntly in the mid North Island would be no longer needed "unless market conditions change significantly". The landscape of Huntly, in the coal-producing Waikato district south of Auckland, is dominated by the huge gas and coal-fired power station sitting on the western bank of the Waikato River. Chief executive Albert Brantley said Genesis had been on a path to closing its four coal and gas-fired Rankine generators since 2009.