Checking Carbon Monoxide Alarms. Brominated Fire Retardants. By Nick Gromicko Brominated flame or fire retardants (BFRs) include a wide range of chemicals added to household furnishings and products to inhibit their ignition and reduce the chance of fire. 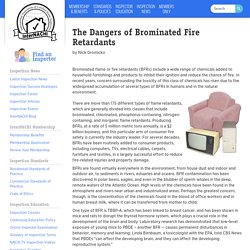 In recent years, concern surrounding the toxicity of this class of chemicals has risen due to the widespread accumulation of several types of BFRs in humans and in the natural environment. There are more than 175 different types of flame retardants, which are generally divided into classes that include brominated, chlorinated, phosphorus-containing, nitrogen-containing, and inorganic flame retardants. Producing BFRs, at a rate of 5 million metric tons annually, is a $2 billion business, and this particular arm of consumer fire safety is currently the industry leader. BFRs are found virtually everywhere in the environment, from house dust and indoor and outdoor air, to sediments in rivers, estuaries and oceans.

Smoke Detectors. The NFPA (National Fire Protection Agency) recommend that every home have a smoke detector outside each sleeping area (inside as well if household members sleep with the door closed) and on every level of the home, including basements. 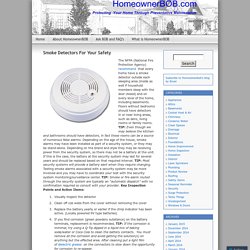 Floors without bedrooms should have detectors in or near living areas, such as dens, living rooms or family rooms. TIP: Even though we may believe the kitchen and bathrooms should have detectors, in fact these rooms can be a source of numerous false alarms. Depending on the age of the house, smoke alarms may have been installed as part of a security system, or they may be stand-alone. Depending on the brand and style they may be receiving power from the security system, so there may not be a battery at the unit. If this is the case, the battery at the security system may last for several years and should be replaced based on that required interval.

Like this: Like Loading... Verisure safety and security by Securitas Direct. Lockitron. Goji Smart Lock. At Goji, we have developed a technologically advanced, beautifully designed smart lock that gives you complete control over access to your home using your mobile phone. 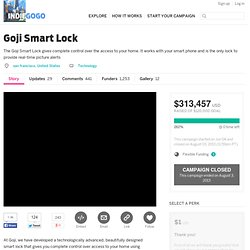 Our Goji Smart Lock is distinguished by its sleek, sophisticated design and its unique ability to send you real-time picture alerts via text or email of the individuals accessing your home. The Goji Smart Lock presents a contemporary new look for a deadbolt lock: a sleek, modern disc in brushed metal with a subtle blue-text LED display that welcomes users by name when the lock is activated. The display also shows the lock/unlock status, and dates and times of all entries and exits. Its elegant simplicity fits with any home décor.

The Goji Smart Lock is UL listed. The Goji Smart Lock has a built-in camera that takes a picture of anyone activating the lock and sends a real-time picture alert to your mobile phone, providing you with visual confirmation of who is accessing your home. Goji works in any country in the world. August Smart Lock - Cisco Firefox. The Best Home Security Monitoring of 2016. Wireless Security - Wireless Home Security Products and Systems. Office Automation by Anjels. How Smart Homes Work" When you're not home, nagging little doubts can start to crowd your mind. 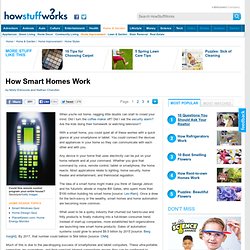 Did I turn the coffee maker off? Did I set the security alarm? Are the kids doing their homework or watching television? With a smart home, you could quiet all of these worries with a quick glance at your smartphone or tablet. You could connect the devices and appliances in your home so they can communicate with each other and with you. Any device in your home that uses electricity can be put on your home network and at your command. The idea of a smart home might make you think of George Jetson and his futuristic abode or maybe Bill Gates, who spent more than $100 million building his smart home [source: Lev-Ram].

What used to be a quirky industry that churned out hard-to-use and frilly products is finally maturing into a full-blown consumer trend. Much of this is due to the jaw-dropping success of smartphones and tablet computers. On the next page, we'll take a look at the technology in a smart home. Smart House - Definition of Smart House. Definition: A smart house is a house that has highly advanced automatic systems for lighting, temperature control, multi-media, security, window and door operations, and many other functions. 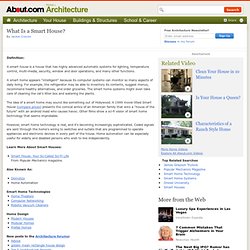 A smart home appears "intelligent" because its computer systems can monitor so many aspects of daily living. For example, the refrigerator may be able to inventory its contents, suggest menus, recommend healthy alternatives, and order groceries. The smart home systems might even take care of cleaning the cat's litter box and watering the plants. The idea of a smart home may sound like something out of Hollywood. However, smart home technology is real, and it's becoming increasingly sophisticated.