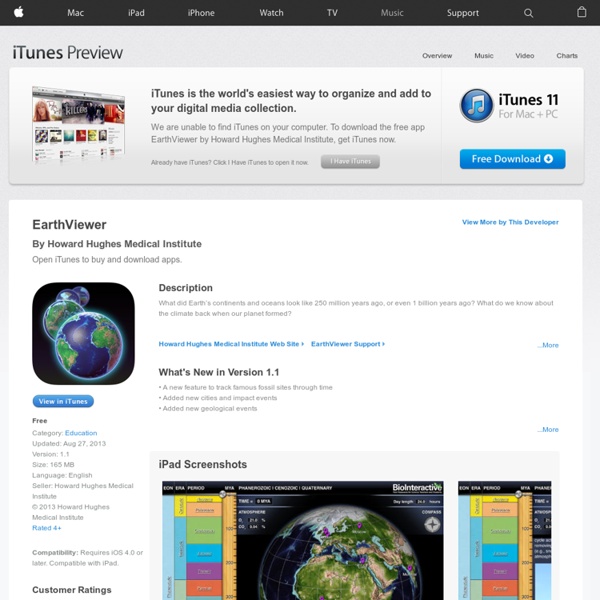 EarthViewer for iPad Takes You Through the History of Earth EarthViewer is a free iPad app that takes you through 4.5 billion years on Earth. EarthViewer allows you to select eons and eras to view. Within each eon and era you can view tectonic plates, continental drift, and other geological events. You can view major biological events in EarthViewer too. Michael Pecirno's Minimal Maps Single Out American Land Use Patterns Most maps of the U.S. prioritize metropolitan areas. But "Minimal Maps" single out the nation's forests, crops, and waterbodies. Eighty percent of the U.S. population lives in "urban" areas, a staggering 249,253,271 souls. Yet these folks live in just 3 percent of the country's 2.3 billion acres of land. Most of America's 50 states are forestland (30 percent), pasture and ranges (27 percent), and crops (18 percent), with parks, tundra, and swamps making up the rest. These are statistics that never fail to blow my provincially urban mind—in part, perhaps, because most maps of the country visually prioritize metropolitan areas.

Make a Splash with our new App - Ara Sarafian - ABC Splash - The Best of ABC Splash apps give you access to the ten hottest topics across Primary and Secondary year levels. These apps are just another wdonerful way to get Splash's outstanding, award-winning content into the classroom for free. Each topic has five videos and is supported by fun quizzes, teaching guides and curriculum links, so there are many great reasons to check them out. Spoiled for choice 9 Excellent Free Map Creation Tools for Teachers and Students 1- Umapper UMapper is a great mapping tool for educators. It allows its users to create and manage interactive maps and geogames online. These maps can be shared with others or be embedded in blogs and websites 2- MapTiler Two New Apps That Are Great for Recording Audio Interviews This week I tested two new apps for recording audio interviews. Both of these apps can be used by students without creating any kind of new online accounts. Neither one is entirely perfect, but they're both quite good. Opinion is a free iPad app for creating short audio recordings. To record simply open the app and tap the big red recording button at the top of the screen. When you're done talking, tap the recording button again to stop the recording.

The #1 reason people die early, in each country You're probably aware that heart disease and cancer are far and away the leading causes of death in America. But globally the picture is more complicated: (Vox / Anand Katakam and Joss Fong) What impact? 5 ways to put research into practice in the 1-to-1 classroom Technology in the classroom has had a long and chequered history. Traditionally, the debate around its utility has been dominated by bouncy edtech evangelists in one corner, promising technology-fueled educational transformation, and by staunch technology sceptics opposite, reminding us all that, as far as they can see, said transformation is yet to manifest itself after decades of digital technology use. The resulting, often acutely polarised debate usually ignores altogether how technology is actually used in our schools to support the daily business of teaching and learning and how teachers and learners continue teaching and learning using whichever tool gets the job done, because, for most of us, technology is neither the problem nor the solution, it is just an option. So, what does research suggest works?

Redefining The Task Many of you will have heard of the SAMR model for embedding technology in education, developed by Dr Ruben Puentedura. This two phase, four step model posits that the true aim for anyone seeking to harness tech in the classroom should be to redefine the actual tasks we are setting as educators. The iPad offers a wealth of opportunities to reach this goal due to its innate versatility and mobility. A teacher recently told me that she didn't see the point of iPads in education as there was nothing she could do with them that she couldn't do without them. This is a classic case of someone who is only able to see/utilise technology within the ""Substitution" band.

32 maps that will teach you something new about the world EVER THOUGHT TO YOURSELF, “How many smaller countries could you fit into Australia?” Or possibly, “Which countries in the western hemisphere have legit secessionist movements?” Or, perhaps most pressing of all, “Where does it pay best to be a lifeguard?” We live in the age of the map now, so these are no longer questions you have to continue simply wondering about. Maps are spectacular at conveying a lot of information in a simple image. Design Thinking with iPads Design thinking is a powerful tool to really get your students thinking about and tackling a problem or topic at a much deeper level. It is a structured task that focuses on giving considerable time to thinking about and empathising with the people within the situation (Target audience or client), designing and prototyping a possible solution that is immediately challenged in order to improve it. It is used much in business and the design industry but can be used as a general classroom task within any subject area. It also gets students to work quickly without much introduction. Design thinking promotes creative thinking, team work, and student responsibility for learning.

Everything Sings - Siglio Press Intro by Ira Glass, essays by Albert Mobilio and Ander Monson, interview by Blake Butler. That a cartographer could set out on a mission that’s so emotional, so personal, so idiosyncratic, was news to me. —IRA GLASS, host of This American Life, from his introduction to Everything Sings.