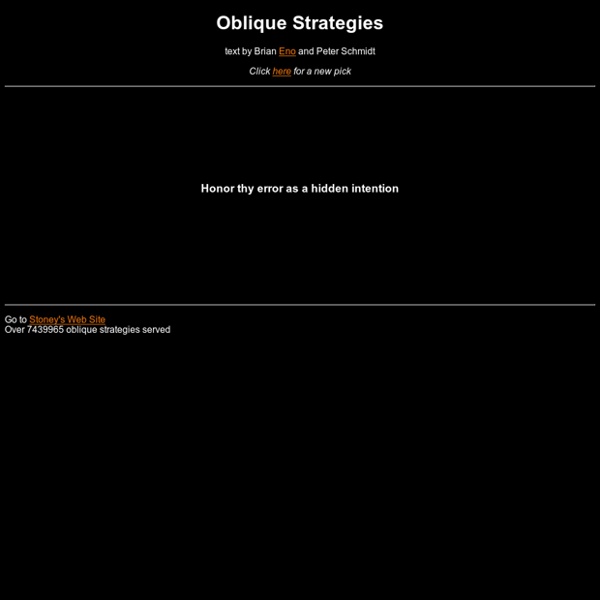 PRX » Series » JOE STRUMMER'S LONDON CALLING Joe Strummer, the legendary gravel-voiced punk-poet from The Clash, loved to listen to music on the radio. Even as he toured the world with "the only band that matters," he still had a dream to one day spin records for the BBC World Service, where he heard the latest UK hits over the shortwave band as a teenager in Africa. He finally got his wish in 1999, when BBC World Service premiered Joe Strummer's London Calling. Between then and 2002, Strummer hosted a series of programs with a simple format - one man and his eclectic record collection. His globe spanning playlists included many of the rock, reggae and folk artists that inspired the Clash, plus many surprises. Medieval Fantasy City Generator by watabou This application generates a random medieval city layout of a requested size. The generation method is rather arbitrary, the goal is to produce a nice looking map, not an accurate model of a city. All the actions and options are accessible via the context menu. Hot keys: 👉For development news and related stuff please check a dedicated reddit community. The first version of this generator was created for the monthly challenge #17 of the proceduralgeneration subreddit.

Rain Sounds: Effective Sleeping Method #51 During our recent bout of scurvy-induced influenza, the Professional Moron team realised sleep was not an option. To fill the endless void of the night, we stuck on some relaxing rain type noises. Worth a shot, right? Better than just lying there listening to ourselves hacking away every 10 seconds like people with really nasty coughs. What is it about rain that’s so soothing? When you’re indoors, it’s essentially a middle finger to the environment. All of Liquid Television is Now Available Online! For its brief three year run, avant garde animation showcase Liquid Television was an absolute cultural institution. Commissioned by MTV but airing here on SBS on Saturday nights, it was a concentrated dose of weirdness, combining short skits and the odd – very odd – ongoing series to present a kind of cutting edge cultural melange. A whole generation soaked a little Liquid TV along with the intoxicants of their choice before heading out for the evening – it was, to paraphrase Mojo Nixon, a glorious time on the planet Earth.

Let Nature Sing How the music business woke up to the beauty of birdsong 'Something rather magical happened on Radio 1 last Friday. Just before five o’clock, the presenter of The Official Chart Show, Scott Mills, interrupted the usual mix of pop, hip hop and Afrobeat to play a minute of birdsong.' Siren song: can a charity single save Britain’s birds from extinction? 'The single becomes more affecting with each listen, as the penny drops that, if the catastrophic decline in UK birdlife were to continue, it could serve as a document to remind us what birdsong sounded like.' Birds Debut on the UK Singles Chart About txt.fyi This is the dumbest publishing platform on the web. Write something, hit publish, and it's live. There's no tracking, ad-tech, webfonts, analytics, javascript, cookies, databases, user accounts, comments, friending, likes, follower counts or other quantifiers of social capital.

Lloyd Borrett - Computing - Petals - Bill Gates plays Petals Around the Rose It was June 1977, the very early days of the microcomputer industry. The founders of Microsoft, Bill Gates and Paul Allen, were amongst those heading home to Albuquerque from the National Computer Conference in Dallas. In the September/October 1977 edition of "Personal Computing" magazine, Henry Gilroy provided the following report on the introduction of the Petals Around the Rose brain teaser to his fellow travelers on the return journey. Heading back to Albuquerque on a hot, humid Texas evening, the party from Personal Computing fell in with a gang from Microsoft. A couple of MITs folks were also in the crowd. Luckily, an ideal distraction for computer types was available.

A Music Composition Trick Used To Give The Illusion Of An Ever Rising Pitch Is Called A? Answer: Shepard Tone If you’ve ever been at the cinema and noticed that the musical score for the movie or a sound effect within the movie seems to be perpetually climbing ever higher in scale (even though such a thing would be impossible), you’re likely experiencing an artful application of what is known as a “Shepard tone”. Named after Roger Shepard, a pioneering cognitive scientist, the Shepard scale is a type of auditory illusion created by combining several tones together. The key to the illusion is that all the tones follow an octave-separated sine wave pattern and that one is a bass tone.

Insights into Sexism: Male Status and Performance Moderates Female-Directed Hostile and Amicable Behaviour Abstract Gender inequality and sexist behaviour is prevalent in almost all workplaces and rampant in online environments. Although there is much research dedicated to understanding sexist behaviour, we have almost no insight into what triggers this behaviour and the individuals that initiate it. Although social constructionist theory argues that sexism is a response towards women entering a male dominated arena, this perspective doesn’t explain why only a subset of males behave in this way. We argue that a clearer understanding of sexist behaviour can be gained through an evolutionary perspective that considers evolved differences in intra-sexual competition.

Small music venues are part of music's heritage – we need to support them This year’s Glastonbury Festival saw a closing set to rival the very best. For two hours on a June evening, Radiohead seduced and energised a vast and adoring crowd before delivering a brilliant finale. Thom Yorke’s vocals hung over the English landscape like evening mist, clearing as a choir of 50,000 voices echoed the refrain, joined no doubt by a TV and online audience of millions.

Related:
Related:  music   -  Neat Stuff   -  Productive Series   -  Save paper & ink printing only what you want « PrintWhatYouLike.com   -  Fixya: Ask & Find Answers to Everyday Product Questions   -  ManualsLib - Makes it easy to find manuals online!   -  Bored? Here's 101 Useful Websites With Easy to Remember Names (Updated)   -  This Is A Pretty Long List But You Will Find Useful Websites   -  SimplyNoise -- The Best Free White Noise Generator on the Internet.   -  70 of the Most Useful Websites on the Internet – Johnny Lists   -  12 Useful Websites to Improve Your Writing   -  ManualsLib - Makes it easy to find manuals online!   -  Discuvver - Inspiration, one random useful website at a time