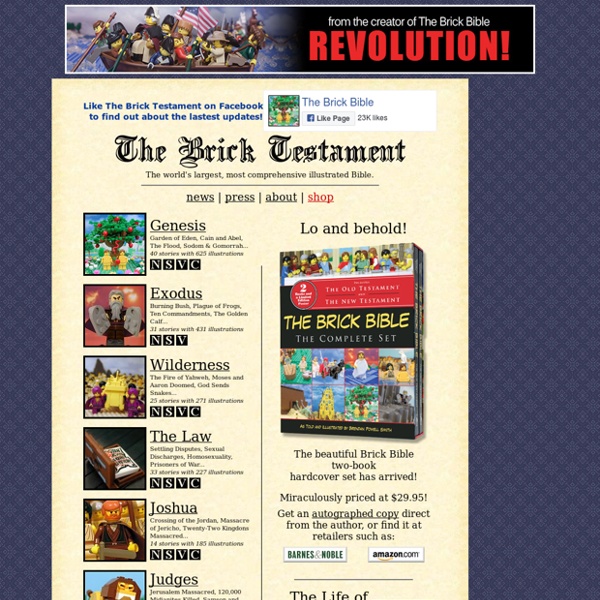 Incredible Self-Portraits by Levi van Veluw Today’s inspiration comes from Levi van Veluw, a multidisciplinary artist from Netherlands, famous for his remarkable self-portraits. Light by Levi van Veluw Gravel by Levi van Veluw Carpet by Levi van Veluw Tape by Levi van Veluw Sterling Wood by Levi van Veluw 6 Free Sites for Creating Your Own Comics In the days of cold, hard newsprint, only people who could draw were successful comic strip authors. In some cases, this resulted in comic strips that had very nice pictures, but weren't all that funny (cough, Blondie). Thankfully, the Internet has taught us not to accept an inferior form of comic artistry, but a more flexible one. Comic strip enthusiasts who want funny but don't care about pretty drawing can have their strips, those who want artistry have theirs, and even those with very specific tastes can find something just right. The best part about these developments is that they allow you, regardless of any talent as an artist or comedian, to create your very own comic strip.

CC-Bildersuche 3,190 free judas photos judas tree, betrayal, judas priest, hanukkah, gaga, last supper, abraham, man kneeling License type: Sort: Preview Get photo Orkut X Orkut is a social networking website that is owned and operated by Google. The service is designed to help users meet new and old friends and maintain existing relationships. The website is named after its creator, Google employee Orkut Büyükkökten. Orkut was one of the most visited websites in India and Brazil.[2] As of March 2013, 47% of Orkut's users were from Brazil, followed by India with 16.1% and United States with 7.3%.[1] Originally hosted in California, in August 2008 Google announced that Orkut would be fully managed and operated in Brazil, by Google Brazil, in the city of Belo Horizonte.

25 Various Styles of The Wizard of Oz Illustrations The Wizard of Oz is a 1939 American musical-fantasy film mainly directed by Victor Fleming and based on the 1900 children’s novel The Wonderful Wizard of Oz by L. Frank Baum. In the film, Dorothy, a schoolgirl living in Kansas, is struck unconsicious during a tornado. Facebook This article is about the social networking service. For the type of directory, see face book. Facebook (formerly [thefacebook]) is an online social networking service headquartered in Menlo Park, California. Terry Border Makes Everyday Objects Come Alive (18 pics) Mail-Order Bride Artist Terry Border is one of those people who has a secret gift. He can take boring, everyday objects and make them come alive! In fact, his art can be appreciated for the clever thought behind it. What I love most about his work, though, is that it can be enjoyed by everyone.

English verb Conjugation: modal verbs, irregular verbs, present, future, participle In English, you can type in infinitive forms such as go, abide, break … but also not remember, hurt oneself, come in, go back ... The conjugator recognizes infinitive, reflexive and negative forms as well as phrasal verbs. The Contractions option displays the contracted forms of auxiliaries and negatives, e.g.: not believe: « I do not believe » or « I don't believe », see: « I have seen » or « I've seen », « I will go » or « I'll go »... The Deadliest Art in the World Photograph by Luke Jerram Luke Jerram makes the deadliest art in the world. His subjects have caused pain and suffering for hundreds of millions of people throughout history. They are infectious, they are resilient, and they are everywhere.