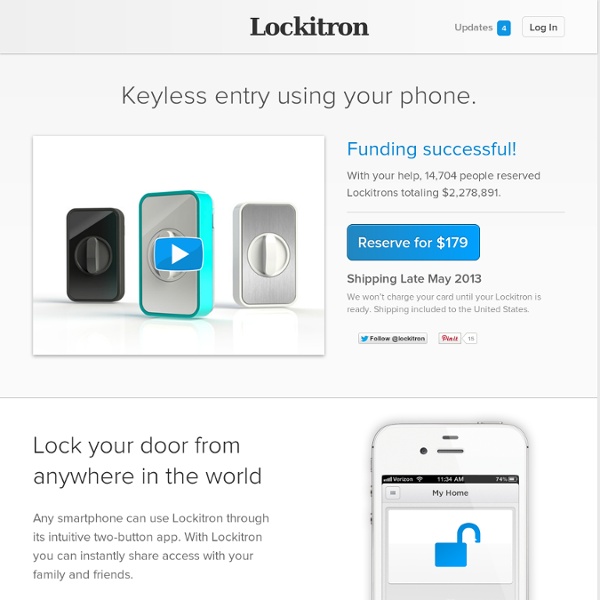 Goji Smart Lock At Goji, we have developed a technologically advanced, beautifully designed smart lock that gives you complete control over access to your home using your mobile phone. Our Goji Smart Lock is distinguished by its sleek, sophisticated design and its unique ability to send you real-time picture alerts via text or email of the individuals accessing your home. The Goji Smart Lock presents a contemporary new look for a deadbolt lock: a sleek, modern disc in brushed metal with a subtle blue-text LED display that welcomes users by name when the lock is activated. The display also shows the lock/unlock status, and dates and times of all entries and exits. Its elegant simplicity fits with any home décor. The Goji Smart Lock is UL listed.

Life with Nest Protect Nest Protect constantly monitors its batteries and sensors. If the batteries are low, you’ll get a message on your phone. You can get new batteries long before an annoying, low-battery chirp jolts you awake at 2am. 20 Game-Changing Technology Trends That Will Create Both Disruption and Opportunity on a Global Level No matter what industry you’re in, your company can’t survive without technology. And these days, even non-technical employees know that technology goes way beyond desktop computers and networks. From smart phones and tablet computers to mobile apps and cloud-based technology, there’s a plethora of technological advancements to not only keep track of, but also to profit from. To stay competitive, your organization needs to anticipate the most significant technology trends that are shaping your business and then develop innovative ways to use them to your advantage, both inside and outside of your organization. Remember, if it can be done, it will be done.

Smoke Detectors The NFPA (National Fire Protection Agency) recommend that every home have a smoke detector outside each sleeping area (inside as well if household members sleep with the door closed) and on every level of the home, including basements. Floors without bedrooms should have detectors in or near living areas, such as dens, living rooms or family rooms. TIP: Even though we may believe the kitchen and bathrooms should have detectors, in fact these rooms can be a source of numerous false alarms. Depending on the age of the house, smoke alarms may have been installed as part of a security system, or they may be stand-alone. Our Story Jaro is the brainchild of Vivant Ltd, a leading digital ideas company based in Sydney, Australia. The idea behind Jaro was born out of a desire to use digital engagement to help charities generate funding in a more efficient manner. We launched Jaro in the UK on April 16, 2013. Our story however started five years earlier.

US Census Bureau releases public API for mobile and web developers The US Census Bureau has released its very first public API, allowing developers to create web and mobile apps based on the government's collection of demographic and economic statistics. The Bureau launched the API Thursday, alongside a new "app gallery" website where users can view and download apps that have already been built. With the API, developers will have access to two sets of statistical databases: the 2010 Census, and the 2006-2010 American Community Survey. The former includes the latest data on population, age, sex, race, and home ownership, while the latter offers more socio-economic statistics, covering fields like education, income, and employment. The Census Bureau is encouraging developers to create apps that are customized to consumer needs, and to share their ideas on its Developers Forum page.

Brominated Fire Retardants by Nick Gromicko Brominated flame or fire retardants (BFRs) include a wide range of chemicals added to household furnishings and products to inhibit their ignition and reduce the chance of fire. In recent years, concern surrounding the toxicity of this class of chemicals has risen due to the widespread accumulation of several types of BFRs in humans and in the natural environment. There are more than 175 different types of flame retardants, which are generally divided into classes that include brominated, chlorinated, phosphorus-containing, nitrogen-containing, and inorganic flame retardants. Producing BFRs, at a rate of 5 million metric tons annually, is a $2 billion business, and this particular arm of consumer fire safety is currently the industry leader.

How Smart Homes Work" When you're not home, nagging little doubts can start to crowd your mind. Did I turn the coffee maker off? Did I set the security alarm? StormTag - A Bluetooth Weather Station. On Your Keyring. by Jon Atherton What if you could be part of a team that changed the way our climate was analysed? We’re about to start a 2 year worldwide project to perfect crowd sourced weather data, and we need your commitment to help us. Wouldn’t it be great to carry a weather station on your keyring?

Smart House - Definition of Smart House Definition: A smart house is a house that has highly advanced automatic systems for lighting, temperature control, multi-media, security, window and door operations, and many other functions. A smart home appears "intelligent" because its computer systems can monitor so many aspects of daily living. For example, the refrigerator may be able to inventory its contents, suggest menus, recommend healthy alternatives, and order groceries. The smart home systems might even take care of cleaning the cat's litter box and watering the plants. QLEEK - Your Digital Life in the Real World The campaign is over, click here for exclusive future updates. Version Française plus bas et traduction des contreparties Grow your collection to a unique piece of art! Qleek is a beautiful way to tell who you are and what you like. It allows you to feature your most beloved songs, photographs and videos in your living room, your office or your store. We think you’ll love it!

Korner - Home Security Anyone Can Use and Everyone Can Afford At under $100 and setup under 2 minutes, this is truly built for everybody. Introducing the First 1-piece Door/Window Sensor - works better, looks great! A security product for your apartment or home, designed so anyone can use it and everyone can afford it.