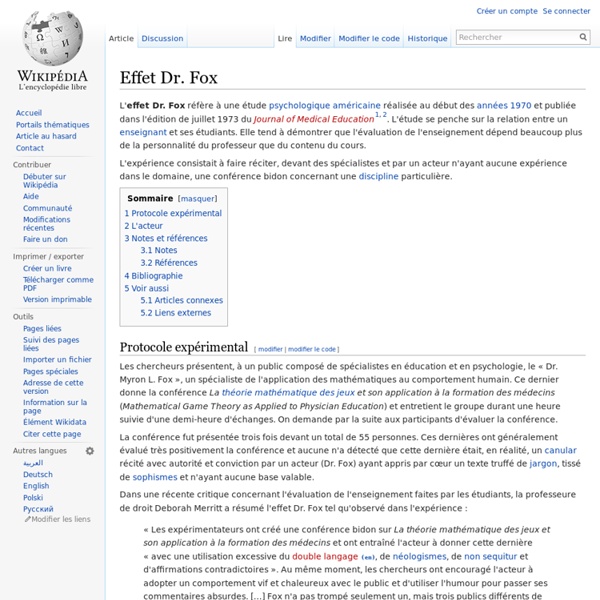 Illusion of transparency - Wikipedia The illusion of transparency is a tendency for people to overestimate the degree to which their personal mental state is known by others.[1] Another manifestation of the illusion of transparency (sometimes called the observer's illusion of transparency) is a tendency for people to overestimate how well they understand others' personal mental states. This cognitive bias is similar to the illusion of asymmetric insight. Experimental support[edit] For her PhD dissertation in psychology at Stanford University, Elizabeth Newton created a simple test that she regarded as an illustration of the phenomenon.[2] She would tap out a well-known song, such as "Happy Birthday" or the national anthem, with her finger and have the test subject guess the song. People usually estimate that the song will be guessed correctly in about 50 percent of the tests, but only 3 percent pick the correct song. Public speaking and stage fright[edit]

False attribution False attribution can refer to: Misattribution in general, when a quotation or work is accidentally, traditionally, or based on bad information attributed to the wrong person or groupA specific fallacy where an advocate appeals to an irrelevant, unqualified, unidentified, biased, or fabricated source in support of an argument.[1] Fallacy[edit] The fallacy of false attribution is a type of appeal to authority, where the proponent either hides or puffs up the credentials or credibility of the source to enhance an argument.

The Internet Is Making You Smarter, Really In his new book, “Smarter Than You Think,” journalist Clive Thompson argues that the digital revolution – from search engine sophistication to status update proliferation – is actually dovetailing with how the human brain naturally works to make us better thinkers. Thompson is no latter day Cassandra (or, for that matter, Nicholas Carr), warning that new technology will rob us of our capacity to concentrate, create or text in complete sentences. A technology reporter for Wired and The New York Times Magazine, he is an enthusiastic and optimistic cheerleader for new technology. Thompson recently spoke with Digiday about how new technology is changing the way we think, learn and remember – and why that’s a good thing for brands and people alike. Excerpts: Why is it that there have been more books that rail against the deleterious effects of digital technology than there are those like this, that celebrate it?

A Comprehensive Guide to Content Curation Depending on your point of view, content on the internet can be a vast collection of treasures, a cesspool swimming in filth, or a big pile of gold specks mixed in with an even bigger pile of dirt. My guess is that most people lean towards the last one, giving rise to content curation, the process of finding the gold among the dirt, as a very popular online activity. At its most basic, content curation is the process of finding, organizing, and presenting content from the flood of information and media that inundate the web by the second. Similar to museum curators, content curators sift through a seemingly never-ending amount of digital objects to unearth individual items worthy of being showcased for a specific audience. Once the selection is finished, the curator presents those assembled elements under a cohesive theme, just like museum curators do for specific exhibitions. It helps to think of a content curator as someone who’s editing a print magazine.

Nut Island effect The Nut Island effect describes an organizational behavior phenomenon in which a team of skilled employees becomes isolated from distracted top managers resulting in a catastrophic loss of the ability of the team to perform an important mission. The term was coined by Paul F. Levy, a former Massachusetts state official, in an article in the Harvard Business Review published in 2001. The article outlines a situation which resulted in massive pollution of Boston Harbor, and proposes that the name of the facility involved be applied to similar situations in other business enterprises.

If You Think We Are Alone In The Universe – You Might Want To See This One of the most popular questions today is “are we alone in the universe?” Believe it or not, you’re in the minority if you believe that absolutely no intelligent life exists in the universe. In the United States alone, at least half of all Americans say that we’re not alone in the universe. Fifty percent of Americans already believe that there is some form of life on other planets, while only seventeen percent think that there isn’t. A quarter of Americans believe that intelligent extraterrestrial visitors have already come to Earth and have been doing so for a long time. (source)

Digital curation The term curation in the past commonly referred to museum and library professionals. It has since been applied to interaction with social media including compiling digital images, web links and movie files. Approaches to digital curation[edit] The Digital Curation Centre is a "world leading centre of expertise in digital information curation"[5] that assists higher education research institutions.

Information cascade An Information cascade or informational cascade is a phenomenon described in behavioral economics and network theory in which a number of people make the same decision in a sequential fashion. It is similar to, but distinct from herd behavior.[1][2][3] An information cascade is generally accepted as a two-step process. For a cascade to begin an individual must encounter a scenario with a decision, typically a binary one. Second, outside factors can influence this decision (typically, through the observation of actions and their outcomes of other individuals in similar scenarios). Packaged Pleasures: How Technology and Marketing Revolutionized Desire, by Gary S. Cross and Robert N. Proctor Isabelle Szmigin on how ‘pleasure engineers’ have affected our physical and social well-being Although it is implied throughout, it is in this book’s final chapters that Gary Cross and Robert Proctor present its principal argument: the packaged pleasures that have brought us convenience and enjoyment come at a significant cost to our physical and social well-being. These costs include obesity caused by highly calorific sweets and convenience foods, smoking-related illnesses, and a somewhat less easy to identify loss of sociability engendered by packaged images (cinema and television), recorded music and even funfairs. So-called pleasure engineers have enhanced the sensations of food, sound, pictures and rides and in so doing are responsible for the loss of social interaction. We would prefer to spend time listening to our MP3 players, contend the authors, than exploring the beauty of the countryside.

Help Them Brainstorm! 50+ Tips & Resources Posted by Shelly Terrell on Friday, December 20th 2013 Included in the Digital Tips Advent Calendar and part of the Effective Technology Integration category “An idea, like a ghost, must be spoken to a little before it will explain itself.” – Charles Dickens Brainstorming is an important process that students should do frequently so it becomes a ritual they continue throughout their lives.

Future Thinkers Podcast Latest Posts » Future Thinkers Podcast Podcast: Play in new window | Download Many of us are societally conditioned to follow a certain life script: go to school, get a degree, go into debt, get a corporate job, get married, buy a house, go into more debt, be unhealthy, retire, do some things you’ve always wanted to do, and then die. Of course, there is nothing wrong with having this life path if that is what you truly want, but many people end up conforming to it even if that isn’t their idea of a perfect life. On the other hand, there is a growing number of people who are going against this status quo and writing their own life script. Call them digital nomads, location independent entrepreneurs, or lifestyle designers – people who make their living online, often running their own businesses, while travelling the world.