The Rise and Fall of Jim Crow 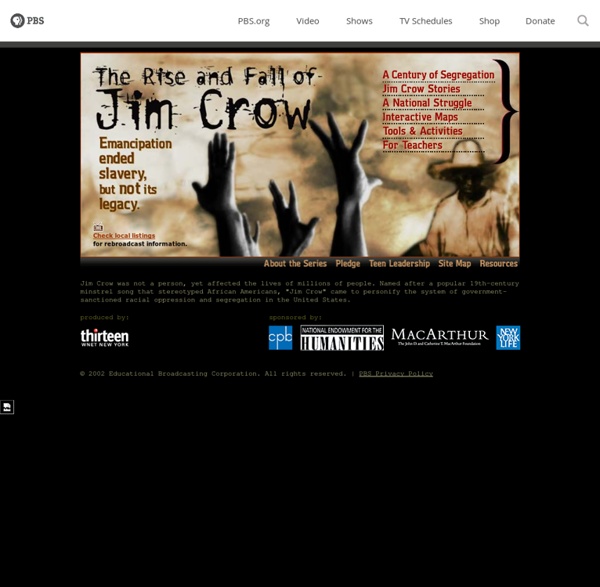 The Birmingham Children's Crusade of 1963 - Biography.com Our Black History coverage continues with a look at the Children’s Crusade of 1963, a pivotal event of the Civil Rights Movement, which opened the eyes of the nation through the courageous activism of its youngest citizens. “We were told in some of the mass meetings that the day would come when we could really do something about all of these inequities that we were experiencing. And we were calling it D-Day. That was May 2, 1963,” remembers Janice Kelsey. Teaching Guide: Exploring Japanese American Internment During World War II This teaching guide helps instructors use a specific primary source set, Japanese American Internment During World War II, in the classroom. It offers discussion questions, classroom activities, and primary source analysis tools. It is intended to spark pedagogical creativity by giving a sample approach to the material. Please feel free to share, reuse, and adapt the resources in this guide for your teaching purposes. Discussion questions Use the painting by Henry Sugimoto and the poster created by the US War Production Board to explain how the attack on Pearl Harbor transformed Japanese Americans from citizens into enemies in the eyes of the US government and the American public.Considering the column from the Manzanar Free Press, explain how the media portrayed and explained Japanese American internment.

Photo Gallery . The Crash of 1929 . American Experience . WGBH Many Americans spent the 1920s in a great mood. Investors flocked to a rising stock market. Companies launched brand-new, cutting-edge products, like radios and washing machines. Exuberant Americans kicked up their heels to jazz music, tried crazy stunts, and supported a black market in liquor after Prohibition. A popular expression of the time asked, “What will they think of next?”

American Passages - Unit 1. Native Voices: Authors Authors The information for each author includes biographical and contextual materials and activities. Chippewa Songs Frances Densmore collected these Chippewa songs between 1907 and 1909. The songs reflect the culture of the Chippewa peoples who once lived along the shores of Lake Huron and Lake Superior, across Minnesota, and west to North Dakota. The Chippewa are Algonquian Indians; that is, they speak a language that is related to those others... Louise Erdrich (b. 1954) Born in Little Falls, Minnesota, Louise Erdrich is a member of the Turtle Mountain Chippewa tribe of North Dakota. Photo Gallery . The 1930s . American Experience . WGBH Browse photos from each of the films in The 1930s collection. Throughout the 1930s, taste in popular music shifted dramatically with a wave of interest in "ethnic music." Louis Armstrong, pictured here with his band, gained renown along with artists such as Ella Fitzgerald, Duke Ellington, and Billie Holiday. |Courtesy of the Louis Armstrong House and Archives at Queens College; In the start of "The Golden Age of Hollywood," Grauman's Chinese Theater radiates glamour at the premier of a Hollywod movie. The 1930s saw the production of the first movies with color and sound.

History.org: Ku Klux Klan In 1915, white Protestant nativists organized a revival of the Ku Klux Klan near Atlanta, Georgia, inspired by their romantic view of the Old South as well as Thomas Dixon’s 1905 book “The Clansman” and D.W. Griffith’s 1915 film “Birth of a Nation.” This second generation of the Klan was not only anti-black but also took a stand against Roman Catholics, Jews, foreigners and organized labor. It was fueled by growing hostility to the surge in immigration that America experienced in the early 20th century along with fears of communist revolution akin to the Bolshevik triumph in Russia in 1917. The organization took as its symbol a burning cross and held rallies, parades and marches around the country. Association for Library Service to Children (ALSC) Esquivel!: Space-Age Sound Artist, illustrated by Duncan Tonatiuh, written by Susan Wood and published by Charlesbridge. Duncan Tonatiuh creates a sense of sound and movement through energetic, textured collage illustrations that celebrate the life of innovative Mexican musician and composer Juan García Esquivel. Incorporating funky fonts and far-out fashions, Tonatiuh’s unique artistic style harkens back to indigenous codex art and lends cultural authenticity to this pulsating picture-book biography. The Princess and the Warrior: A Tale of Two Volcanoes, illustrated and written by Duncan Tonatiuh and published by Abrams Books for Young Readers, an imprint of ABRAMS.

Biography.com: Emmett Till The murder of 14-year-old Emmett Till on August 28, 1955, galvanized the emerging Civil Rights Movement. Synopsis Fourteen-year-old Emmett Till was visiting relatives in Money, Mississippi, on August 24, 1955, when he reportedly flirted with a white cashier at a grocery store. Four days later, two white men kidnapped Till, beat him and shot him in the head. The men were tried for murder, but an all-white, male jury acquitted them. Till's murder and open casket funeral galvanized the emerging Civil Rights Movement. Book Award Winners : Tomás Rivera Book Award : Texas State University Click the image above for more information about the book and author Works for Older Readers: Out of Darkness by Ashley Hope Pérez. Carolrhoda LAB Pérez’s historical fiction explores the devastating consequences of racism in the context of the worst school disaster in U.S. history. Set in New London, Texas in 1936 when oil drilling created new jobs, commerce, and a new school, we see a community reckoning with a legacy of tripartite segregation among White, Black, and Mexican families.