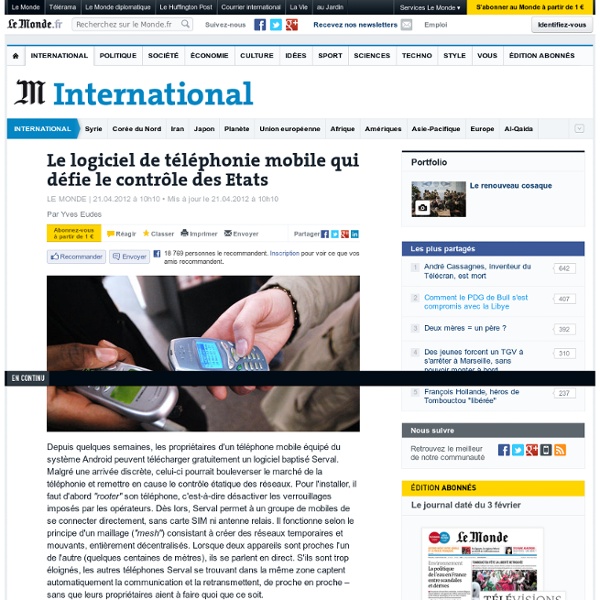 How Not to Steal People's Content on the Web The best content marketers aren't afraid to share. Share content. Share links. Share ideas. Share data. Numbers From Around the Web: Round 5 Today’s NFATW post comes from Martin Sona, a QS friend and organizer for the QS Aachen/Maastricht meetup group, who pointed out this fascinating project on the QS Facebook group. Dale Lane is a software developer for IBM living and working in Hampshire and he has been developing neat personal tools for his self tracking for the last few years. Let’s take a look at a few of them. Tracking TV Watching Inspired by the background data collection offered by last.fm designed to capture music listening habits Dale set out to create his own “scrobbler” to better understand his TV viewing habits. What he came up with is amazing:

Freedom of information legislation Freedom of information laws (FOI laws) allow access by the general public to data held by national governments. They establish a "right-to-know" legal process by which requests may be made for government-held information, to be received freely or at minimal cost, barring standard exceptions. Also variously referred to as open records, or sunshine laws (in the United States), governments are also typically bound by a duty to publish and promote openness. In many countries there are constitutional guarantees for the right of access to information, but usually these are unused if specific support legislation does not exist. Introduction[edit] 'I Have a Dream' Posted in Defiance of Copyright for Internet Freedom Day As Friday is one year since the Internet blackout against the Stop Online Piracy Act, some Internet activists are marking the date by declaring "Internet Freedom Day." How does one celebrate Internet Freedom Day? Fight for the Future, an advocacy group that played a key role in SOPA's defeat, is commemorating the date by uploading and sharing footage of Martin Luther King Jr.'

Nonprofit Common Crawl Offers a Database of the Entire Web, For Free, and Could Open Up Google to New Competition Google famously started out as little more than a more efficient algorithm for ranking Web pages. But the company also built its success on crawling the Web—using software that visits every page in order to build up a vast index of online content. A nonprofit called Common Crawl is now using its own Web crawler and making a giant copy of the Web that it makes accessible to anyone. The organization offers up over five billion Web pages, available for free so that researchers and entrepreneurs can try things otherwise possible only for those with access to resources on the scale of Google’s. “The Web represents, as far as I know, the largest accumulation of knowledge, and there’s so much you can build on top,” says entrepreneur Gilad Elbaz, who founded Common Crawl. “But simply doing the huge amount of work that’s necessary to get at all that information is a large blocker; few organizations … have had the resources to do that.”

Your company doesn't own your Internet presence PaidContent published an absolutely absurd piece yesterday on the departure of New York Times assistant managing editor Jim Roberts, who happens to be quite popular on Twitter, the real-time microblogging platform. Jim -- a lovely fellow by any measure -- has some 75,000 followers. The premise is that the New York Times or any other employer could very well claim a person's following as a tool of doing business, no different than your corporate laptop or the proprietary documents it holds. Oh, hell no. Allow me to count the ways in which this is ridiculous: Legally, Twitter doesn't own your tweets -- but it does own its user accounts.

The Most Ridiculous Law of 2013 (So Far): It Is Now a Crime to Unlock Your Smartphone - Derek Khanna When did we decide that we wanted a law that could make unlocking your smartphone a criminal offense? The answer is that we never really decided. Reuters This is now the law of the land: PENALTY: In some situations, first time offenders may be fined up to $500,000, imprisoned for five years, or both. For repeat offenders, the maximum penalty increases to a fine of $1,000,000, imprisonment for up to ten years, or both

Pirate Bay decade: Fighting censorship, copyright monopolies bit by bit — RT Op-Edge Rick Falkvinge is the founder of the first Pirate Party and campaigns for sensible information policy. Published time: August 16, 2013 09:05 Ten years on, The Pirate Bay has made it clear that no laws in the world can shut down a service wanted by hundreds of millions of people. It will keep decentralizing to protect itself from legal assaults, says Swedish Pirate Party founder Rick Falkvinge. The phenomenon of sharing culture and knowledge seems to swing in cycles between centralized and decentralized.

Mozilla’s Lightbeam Firefox tool shows who's tracking your online movements Mozilla has released a free tool called Lightbeam that aims to help users of the Firefox browser see who is tracking their browsing habits. Lightbeam is a browser add-on that creates a real-time graph of all the tracking information that is deposited in the form of cookies on your computer as you browse the internet. It will enable users to identify third-party companies tracking their online behaviour for targeted advertising and other purposes. The launch was described as a "watershed moment" by Mozilla, which is hoping to capitalise on growing awareness among internet users of how their online activities are tracked for commercial purposes. The company started work on the add-on in 2012 under the name Collusion. Lightbeam is aimed at a mainstream audience, producing a real-time visualisation charting every site a user visits, and every third-party that operates on those sites that could be collecting and sharing user data.