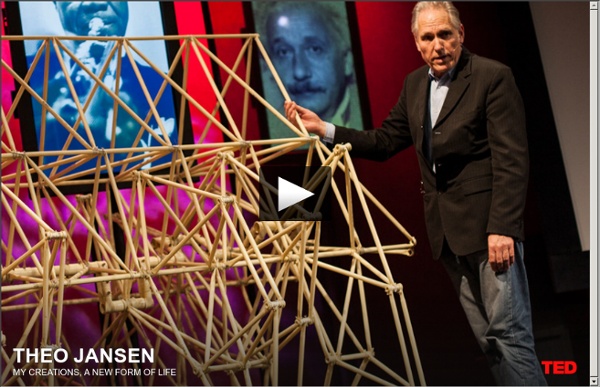 May 2015 Here is a segment on the Morris Museum that was broadcast by WMBC-TV in the New York City & northern New Jersey area last weekend. The first two-thirds of the video is on the mechanical music instruments, and the rest is about the automata. Not only do we get to see and hear some of these wonderful machines, but we also get some valuable commentary from the both the Conservator and Curators of the collection. shin egashira » playground This Playground is part of the Playgrounds and Toys project by Art for the World, an NGO that invites artists to contribute their art around the world. This playground was proposed for the community affected by the Tsunami in the Southern coast of India. The playground is inspired by rocks, waves and the wind, and their formal relationship.

The 10 Best TED Talks of 2011 Watching videos online is usually considered fun, but generally a waste of time. Not so with TED videos, which are uniformly interesting, educational, inspiring, and enjoyable. If you haven't spent much time (or any) checking out TED videos, you should – and to help with that, I've compiled what seem to be the very best 10 TED videos of 2011. It was a grueling task, combing through the cream of the crop on the TED site, but somebody had to do it. Some of the talks may have been filmed prior to 2011 but all of the talks here were posted in 2011. Unless you were lucky enough to attend the TED event in question, it's still new to you.

People Transformed Into Paintings by Alexa Meade Upon first glance you might think these are paintings drawn on canvas, but it is actually paint drawn on real people. Consider this unique art form to be at the intersection of portraiture, painting, photography, and installation. D.C. based artist Alexa Meade has created these fascinating pieces that blend people into art, making them a part of the painting. “Rather than creating representational paintings on a flat canvas, Alexa Meade creates her representational paintings directly on top of the physical subjects that she is referencing. When photographed, the representational painting and the subject being referenced appear to be one and the same as the 3D space of her painted scenes becomes optically compressed into a 2D plane.”

The Sun Altered Cube: A solar powered kinetic installation by Michael Jantzen The painted steel Sun Altered Cube is a large solar powered kinetic art installation designed by Michael Jantzen to be placed into a public park. An array of solar cells is mounted on the top of the cube. These solar cells power two electric motors that are connected to two corners of the cube. The corners have been separated from the rest of the cube so they can be slowly rotated in and out of phase, by the solar powered electric motors. The speed of the rotating corners varies in relationship to the intensity of the sun. Ghostly sculptures of Bruno Walpoth Ghostly sculptures of Bruno Walpoth. Life-size, his powdered beauties, as if in opposition to their ghostly stature, seem heavy and grounded, their gazes locking whomever sees them into a spiritual arrest. Working with traditional sculptural methods, Walpoth’s work is almost alchemical in quality. Muscles, eyes and fingers that have been carved into wood (lime and walnut) or covered with lead leaf foils, seem soft and supple, sad and pensive. Idealistically beautiful, his figures show signs of bones and sinew under fragile skin.

Seo Young Deok's Incredible Chain Sculptures photo © Seo Young Deok The human body and its formation lie at the core of the Korean artist Seo Young Deok’s work who is preoccupied with the stories told through the human figure. His solo exhibition 'Dystopia' took place at the INSA/Arko Art Centre in Seoul from 26 October 2011 until 31 October 2011 and showed his nude sculptures made meticulously in welded metal chain links piece by piece. Seo Young Deok presented a number of nude sculptures, some lying on the ground, some hung on the walls. He used welded metal chains in order to model them linking them piece-by-piece. At first glance, when someone takes a look at his work, one cannot help but notice that the artist draws strong references from the work of the renowned British sculptor Anthony Gormley.

PAUL FRIEDLANDER Brilliant is this man who is a physicist and light sculptor. And his name is Paul Friedlander. Not only does the man have degrees in physics and maths, Friedlander is a professor at Cambridge (at the same department as Stephen Hawking!!), he’s also an cosmologist and interstellar prolusion expert (Google it). Contemporary Sculpture Ideas & Tips - Wood Carving Wood carving is a type of sculpture that in the past has been used for religious and funerary art but these days is mostly used for purely decorative art. Many different styles of home decor sculptures and garden sculptures are made from wood. Wood carving is a difficult art to learn and people that are skilled at wood carving can charge high prices for their work because wood carved sculptures are always in high demand for home decorating. There are seven commonly used methods of wood carving. Each one is used to create a different type of effect using different wood carving tools. The methods of wood carving are,