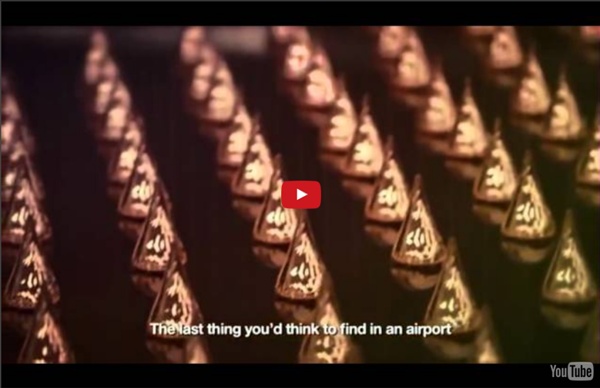 MIT Museum's Kinetic Art exhibition The MIT Museum in Cambridge has a new exhibit featuring kinetic art called "5000 Moving Parts." It features large-scale works of sculptures and machinery by contemporary artists such as Arthur Ganson, Rafael Lozano-Hemmer, Anne Lilly, and John Douglas Powers. The art will be on display until November 2014. In the following cinemagraphs of selected pieces, artists and the show's curator, explain their thought process behind creating each one and provide insight into kinetic art. Electro-Magnetic I, No. 13 “[Takis] has persistently been interested in the idea of invisible forces, and this sculpture is an example of that kind of force.” - Laura Knott, guest curator Haliades “[It’s] capturing that notion of the sirens, that there’s something beautiful and seductive, but perhaps a little bit menacing at the same time.” - John Douglas Powers, artist Breathe “I’ve always been interested in movement and gesture. To Conjugate Ialu

#sxaesthetic Report from Austin, Texas, on the New Aesthetic panel at SXSW. At SXSW this year, I asked four people to comment on the New Aesthetic, which if you don’t know is an investigation / project / tumblr looking at technologically-enabled novelty in the world. (Previously: the original blog post, the main tumblr, my talk at Web Directions South.) I opened the panel by talking about the origins of NA, in a frustration at retro-ness (the belief that authenticity can only be located in the past)—best encapsulated by Russell’s post here: Every hep shop seems to be full of tweeds and leather and carefully authentic bits of restrained artisinal fashion. I think most of Shoreditch would be wondering around in a leather apron if it could. —as well as a real sense that there were new and extraordinary things and experiences in the world, like the ability to see through satellites, which we should wonder at and explore, but instead reduce to the mundane, like GPS driving directions… And Tom said:

Supermajor at ILLUSION - YouTube Time-lapse photography is an interesting technique that records a scene or objects that has a slow state-of-change and turns it into a video that plays back in high speed. The easiest way to do it is to have your camera stationary on something that changes slowly (e.g. clouds, plants growing, etc) and start taking series of photo for hours or even days. Hours and hour’s worth of photos are compressed into a video with merely few minutes playtime, thus creating a time lapsing effect. In another word, it allows us to see the progress faster without having to wait along the actual time. In this article, we’ll show you how to create your own Time-lapse video. Understanding Time-lapse fundamentalsChoosing your camera for Time-lapse projectPost-editing your Time-lapse photosCombining photos into Time-lapse video Ready? 1. We’ll start by understanding some fundamental rules. To create Time-lapse effect, you basically reduce the interval for each shot and merge them into a 24-30 fps video. 2.

Light sculptor| PAUL FRIEDLANDER Brilliant is this man who is a physicist and light sculptor. And his name is Paul Friedlander. Not only does the man have degrees in physics and maths, Friedlander is a professor at Cambridge (at the same department as Stephen Hawking!!), he’s also an cosmologist and interstellar prolusion expert (Google it). Professor Friedlander’s kinetic light-art isn’t something new. What we like most about Paul is not necessarily his amazing kinetic light sculptures, but also his views on how the art-world can be so backwards. Read more on Professor Friedlander in this interesting piece by Things Worth Describing.

A Basket That's a Wiggling Work of Kinetic Art [Video] The incredible thing about Bidum is that it's a basket, and it swings, shimmies, and shakes like some sort of cross between a Slinky and a giant Koosh Ball. The more incredible thing is that it's a basket, and we're actually excited about it. Once you see the videos, though, you'll get what all the fuss is about. Industrial designer Laetitia Florin produced Bidum for her graduate thesis at the École Cantonale d'Art de Lausanne, in Switzerland. What you actually do with the basket is up to you. Well, that's good. [Images courtesy of Laetitia Florin]

Do Not Touch The Sun Altered Cube: A solar powered kinetic installation by Michael Jantzen The painted steel Sun Altered Cube is a large solar powered kinetic art installation designed by Michael Jantzen to be placed into a public park. An array of solar cells is mounted on the top of the cube. These solar cells power two electric motors that are connected to two corners of the cube. The corners have been separated from the rest of the cube so they can be slowly rotated in and out of phase, by the solar powered electric motors. The speed of the rotating corners varies in relationship to the intensity of the sun. The cube has been painted with a strong black and white graphic in order to emphasize the ways in which it continually changes. The Sun Altered Cube is part of a series of structures designed by Michael, which explore ways in which the built environment can interact in unexpected ways, with the natural environment.

corpsenimmersion.overblog.com May 2015 Here is a segment on the Morris Museum that was broadcast by WMBC-TV in the New York City & northern New Jersey area last weekend. The first two-thirds of the video is on the mechanical music instruments, and the rest is about the automata. Not only do we get to see and hear some of these wonderful machines, but we also get some valuable commentary from the both the Conservator and Curators of the collection. Here is where you can learn more about the Morris Museum in Morristown, New Jersey Labels: antiques, autoamta, collections, France, interview, mechanical music, monkey, Morris Museum, Murtogh D.

spellbinding animated gifs by james r. eads and the glitch sep 23, 2016 spellbinding series of animated gifs seemingly suck you into your screen two artists — one painter and one animator — have collaborated on a series of digital gif works that seem to suck viewers into their computer screens. colorful and vibrant illustrations by james r. eads have been brought to life chris mcdaniel, known as ‘the glitch.’ these looped sequences see van gogh-like strokes swirl and coil into seemingly living, breathing compositions, expressing vivid motifs soured from the sky, stars, universe and beyond. art by james r. eads, motion by the glitch the collaboration between james r. eads and the glitch sees static paintings brought to life, digitally morphing into hypnotizing on-screen graphics. endlessly looping in a continual cycle, the colorful compositions seem like portals to a fictional and fantasy-inducing universe. nina azzarello I designboom

Loving Vincent Animated Film Features 62,450 Hand-Painted Frames The animated film Loving Vincent is one that’s nearly six years in the making. If that seems excessive, just wait until you find how it’s made. The movie, which examines the life of post-Impressionist artist Vincent van Gogh, uses hand-painted canvases to bring its action to life. It takes 12 oil paintings just to create one second of footage! Produced by the Oscar-winning studio BreakThru Films, the plot of Loving Vincent takes a deeper look into the iconic artist. The feature-length film includes 62,450 frames that were hand-painted by 115 oil painters. Loving Vincent is composed of 62,450 hand-painted frames. These are some of the characters in the film—it’s hard to believe they weren’t Van Gogh paintings all along. Vincent van Gogh, played by actor Robert Gulaczyk Armand Roulin played by Douglas Booth The process is nothing short of incredible! Postman Joseph Roulin played by actor Chris O’dowd Here’s the film making in progress… …including the painstaking painting process.

Kinetic Sculpture, From Duchamp to Anthony Howe 2 clicks Art that contains movement perceivable by the viewer or that relies on motion for its effect—this is the definition of kinetic art. While the definition explains the practical notion, it doesn't emphasize the hypnotic capabilities of the artform. And though it comprises any medium, it's actually kinetic sculpture that most comes to mind when thinking of the genre. So where did kinetic sculpture get its start? While we often think of motion driven artwork as the only examples of the art from, in reality, kinetic art can be divided into two categories. At either end of the kinetic spectrum, mathematic principles are paramount to the success of the art. The movement owes its name to Naum Gabo, an early 20th-century artist who dubbed his sculptures “kinetic rhythms.” Naum Gabo. Many consider Duchamp's Bicycle Wheel the first piece of kinetic sculpture due to its spinning wheel. Marcel Duchamp. Alexandre Calder began making his mobiles in the 1930s. Alexander Calder Bridget Riley.