Remove The Lyrics From MOST Songs 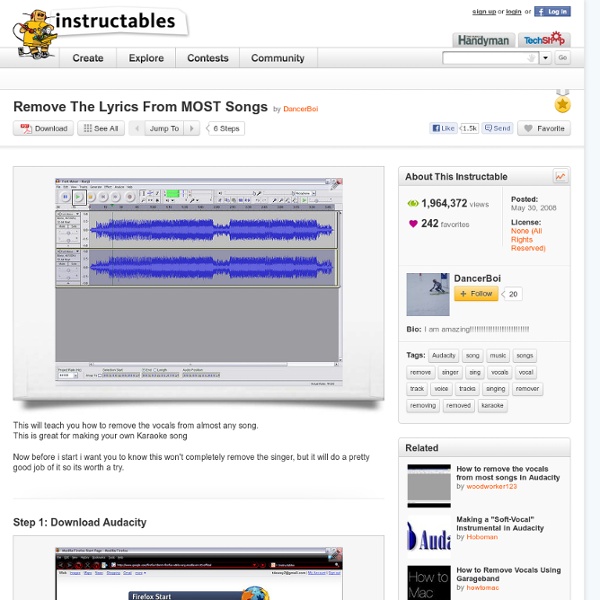 12-june-2011-albums-worth-checking-out.html from pastemagazine.com There’s a lot of great music coming out this summer, and a few of the best albums will be from brand new artists. Here are five debuts you should be looking forward to. 1. Cults – CultsJune 7 Paste Best Of What’s Next duo Brian Oblivion (guitar, keys) and Madeline Follin (bass, drums, vocals) never really planned on making a living playing music, but after releasing their first single “Go Outside” last spring, they converted so many fans that Columbia Records is releasing their debut. The Best Sites for Royalty Free Stock Music and Sound Effects You can't have video without audio... it just doesn't work. That's why in high school it was A/V club, not just V Club... although that does sound pretty rad. Anywho... if you want to complete an animation, short film, commercial or whatever... you have to have good audio, and that means scores and sound effects! I have found some of the best places around the web to purchase packages, find individual songs, and even snag some free tracks for you and your work! AudioJungle

Black Sabbath - Paranoid Guitar Tab Your Flash Player (ver. ) is outdated - Songsterr will support it for a very limited time. All new features are added to (or later) version only. Please upgrade to the latest Flash Player! The Darker Side of Classical Music undefined The Darker Side of Classical Music Classical music is a genre of music that touches on all emotions man is capable of feeling, some of which can only be evoked through the power of music itself. It can be difficult and even deceptive to pin the general feel of a piece of music under one label since there are so many different feelings constantly churning to the surface; peace and action, happiness and sadness, light and darkness.

Mozilla Firefox "Me come yah fi drink milk, me no come yah fi count cow!" (Deliver that which you promised, don't just talk about it!) (15) stay out of trouble or gossip. Means I came here to (whatever you came for) not get involved in politics or gossip. (29) "Carry Go Bring Come" (gossip) (12) solipsistic NATION No. 240: blueOrb : solipsistic NATION solipsistic NATION No. 240: blueOrb Posted by solipsisticnation on Saturday, May 21, 2011 · Leave a Comment Today on solipsistic NATION we’re going to bring in the Rapture with a mix put together for us by Praketh, who is also the host of the blueOrb podcast. Praketh has only released a handful of shows on blueOrb but when he does, well, they’re just breath taking! I first came across Praketh’s blueOrb podcast back in 2006 when he released his Down The Rabbit Hole (Electronic Chillout Mix).

Learn The Guitar Fingerboard Thoroughly in 16 Days Photo by John W. Tuggle If I have to name two things that took my guitar playing to the next level I would say music theory and memorizing the fingerboard. It made me understand the big picture. Compose by Ouyang Xi, He Binbin, Zeng Li & Li Bo Compose Music All High Tech Like Have you ever caught yourself whistling a made up tune and thought to yourself, “hey this could be a hit song!” Those moments of inspiration are fleeting but with the Compose concept, you can compose anywhere. Will 'Born This Way' Be the Most Important Album of Lady Gaga's Career? Lady Gaga is at once the biggest pop star in the world and not really a pop star at all -- at least not in the conventional sense. In myriad ways, she's unlike Britney Spears, who despite a recent string of hits and a well-received album seems about as removed from her own career as she can be while still being physically in the room with a mic strapped to her head. And she's a totally different animal than real-life friends Katy Perry and Rihanna, hit-makers who share an affinity for letting big-name producers and songwriters do their artistic heavy-lifting.

Anniversary 1 In February 2009 we pushed the big green GO button and publicly launched Astor Bell. During the first year we released 12 titles, all very near and dear to our hearts. We wanted to mark our first anniversary with something really special and memorable. Top 10 Free Ways To Discover New Music Online Bored with your music and want to discover some new bands or singers? There are two main ways you can do that online. You can use services which create music maps, allowing you to explore artists similar in genre to the artists you already listen to. Or you can use music blogs and websites that showcase independent or up-and-coming artists, whether the music is being reviewed, or posted by the musicians themselves. Some of these websites have a community built around them, which gives fans the opportunity to interact directly with these new talents. Here is a list of 10 free sites to discover new music.