Coronavirus: Why You Must Act Now - Tomas Pueyo - Medium 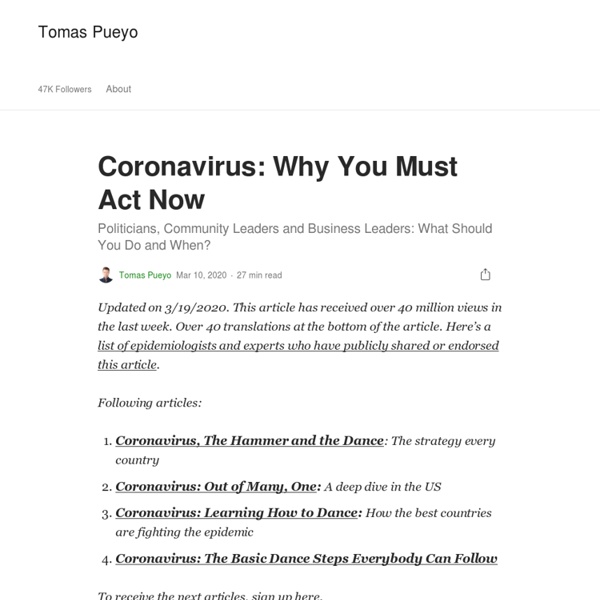 If you stack up the orange bars until 1/22, you get 444 cases. Now add up all the grey bars. They add up to ~12,000 cases. So when Wuhan thought it had 444 cases, it had 27 times more. The same math applies to Paris. Spain and Madrid Spain has very similar numbers as France (1,200 cases vs. 1,400, and both have 30 deaths). In the Comunidad de Madrid region, with 600 official cases and 17 deaths, the true number of cases is likely between 10,000 and 60,000. If you read these data and tell yourself: “Impossible, this can’t be true”, just think this: With this number of cases, Wuhan was already in lockdown. With the number of cases we see today in countries like the US, Spain, France, Iran, Germany, Japan, Netherlands, Denmark, Sweden or Switzerland, Wuhan was already in lockdown. And if you’re telling yourself: “Well, Hubei is just one region”, let me remind you that it has nearly 60 million people, bigger than Spain and about the size of France. So the coronavirus is already here.

Coronavirus Update (Live): 382,019 Cases and 16,565 Deaths from COVID-19 Virus Outbreak - Worldometer NOTE: Worldometer has now redistributed over the time series the 3,951 backlog deaths reported by the state of Bihar (India) on June 9, 2021 (following a government revision of the entire 14-month period), and the over 7,000 backlog deaths (“delayed reporting”) released by the state of Maharashtra (India) on June 10, 11, 12 and June 13, 2021 that had actually occurred in the months of May to early June 2021. Additional delayed reports are expected from Maharashtra in the coming days. As always, Worldometer is committed to redistributing any backlog over the period in which it actually occurred rather than showing it on the day in which it is reported (which would inevitably - and often significantly - distort the actual trend).

From the plague to MERS: A brief history of pandemics On March 11, the World Health Organization (WHO) declared the new coronavirus - which was first reported in the Chinese city of Wuhan late last year - a pandemic. As of May 31, there were more than 6.1 million confirmed cases of COVID-19, according to data collected by Johns Hopkins University, while the number of registered deaths worldwide stood at nearly 371,000. To date, there is no vaccine or known treatment for the new coronavirus, officially known as SARS-CoV-2. Some of the most basic defences against it include frequent and thorough handwashing with soap and water, physical distancing and self-isolation. These recommendations have also been the prescribed measures to contain the spread of other highly contagious diseases in the past. The practice of quarantine for contagious diseases was mentioned in the Canon of Medicine written by Persian polymath Ibn Sina (980-1037), better known in the West as Avicenna, and published in 1025.

How Germany got coronavirus right This April, Walther Leonhard got an unusual call from the authorities in Rosenheim, his hometown in southern Germany. He was being given a new job, in a new field, with a title that had just been invented, “containment scout”. Leonhard, 33, who had been working as a court officer in Munich, was soon back home and hitting the phones. He was the latest recruit into Germany’s army of Kontaktmanagers (tracers) — the foot soldiers of its strategy for containing coronavirus. Leonhard’s job is to call people who have tested positive — and all those they have recently come into contact with — to tell them to self-isolate for a fortnight. It’s not much fun.

The COVID Tracking Project Weekly COVID-19 Data Update, June 25: The US Pandemic Is Surging in the South and West The United States hit a record high for new COVID-19 cases this week. In many areas with rising case counts, testing isn’t keeping up. Meanwhile, hospitalizations in regions with big outbreaks are increasing.

The way we live now - Covid-19 is here to stay. People will have to adapt Editor’s note: Some of our covid-19 coverage is free for readers of The Economist Today, our daily newsletter. For more stories and our pandemic tracker, see our hub IT IS ASTONISHING how rapidly the pandemic has spread, despite all the efforts to stop it. On February 1st, the day covid-19 first appeared on our front cover, the World Health Organisation counted 2,115 new cases. On June 28th its daily tally reached 190,000. That day as many new cases were notched up every 90 minutes as had been recorded in total by February 1st.

'Why wait for it?' How to predict a pandemic How do you predict where a deadly tropical disease such as Ebola, possibly the most virulent in the world, will appear next? Since it first emerged in a small town on the edge of a Congolese forest, it has broken out in seven other African countries, often thousands of miles apart. Sometimes it has spilled out of remote rainforest and then disappeared for years. Other times it has turned up in cities, baffling world bodies and governments that can only try to respond as fast as possible. But actually, given good data, the notoriously unpredictable zoonotic – or animal-borne – disease, which is passed to humans via primates and probably bats, may actually be quite predictable, believes David Redding, a researcher at the ZSL Institute of Zoology in London. Redding’s maps show Ebola hotspots in expected places such as Gabon and the Democratic Republic of the Congo, but also in countries that have never had outbreaks before.

Getting Wise to Fake News The MediaWise for Seniors program will offer two free online courses, funded in large part by, well, Facebook. The first four-week course has already filled up, but students can still enroll in a self-directed course on separating online fact from fiction. Hosted by Christiane Amanpour and Joan Lunden, it is scheduled to begin Oct. 1. “By the end, they’ll be using the techniques used by fact-checkers across the world,” including reverse image searches to determine the sources of photos and videos, said Alex Mahadevan, senior multimedia reporter at Poynter. In addition, Poynter has worked with AARP to produce Fact Tracker interactive videos on spotting and filtering misinformation. The News Literacy Project is also expanding beyond its initial target audience of middle and high school students.

'A huge loss': tributes to victims of the UK's Covid second wave In the first wave of the Covid pandemic in the UK, from March to early September, there were 41,574 deaths, according to government figures. As we move through the second wave and the number of people who have died within 28 days of a positive Covid test approaches 60,000, we pay tribute to some of the more recent victims. Share your tributes and memories of lives lost during the second wave Fehzan Jamil, 10 Fehzan is believed to be one of the youngest victims of coronavirus in the UK.

The Swiss Cheese Model of Pandemic Defense A. Distance is the most effective intervention; the virus doesn’t have legs, so if you are physically distant from people, you avoid direct contact and droplets. Then you have to consider inside spaces, which are especially in play during winter or in hotter countries during summer: the bus, the gym, the office, the bar or the restaurant. That’s because we know SARS-CoV-2 can remain infectious in aerosols (small floaty droplets) and we know that aerosol spread explains Covid-19 superspreading events. Try not to be in those spaces with others, but if you have to be, minimize your time there (work from home if you can) and wear a mask.

3C epiphany - The Japanese authorities understood covid-19 better than most WHEN THE Diamond Princess, a cruise ship suffering from an outbreak of covid-19, arrived in Japan in February, it seemed like a stroke of bad luck. A small floating petri dish threatened to turn the Japanese archipelago into a big one. In retrospect, however, the early exposure taught the authorities lessons that have helped make Japan’s epidemic the mildest among the world’s big economies, despite a recent surge in infections. In total 2,487 people have died of the coronavirus in Japan, just over half the number in China and fewer people than on a single day in America several times over the past week. Japan has suffered just 18 deaths per million people, a higher rate than in China, but by far the lowest in the G7, a club of big, industrialised democracies. (Germany comes in second, at 239.)

This Is When the Fever Breaks Donald Trump came in the wake of that. And then, this week, Josh Hawley. As of Wednesday morning, Hawley was the model of what a Republican senator was going to look like in the post-Trump era. 'Vaccine nationalism' echoes the disastrous mistakes made with HIV Though HIV and Sars-CoV-2 are very different viruses, the Covid-19 pandemic has highlighted striking parallels: governments being too slow to respond; a marked impact on minority communities and a failure to understand why; a governmental response which has veered into overpolicing and victim-blaming, rather than taking every conceivable measure to help people stay safe and healthy. I watch with growing consternation as the world repeats the mistakes of the early response to HIV. Stories of vaccine nationalism fill the headlines, while Boris Johnson celebrates the UK having vaccinated more people than the rest of Europe combined. By the middle of January, just 25 doses of the Covid-19 vaccine had been administered across all poor countries in the world, compared with 39m in wealthier ones. In the mid-1990s, effective treatment for HIV, antiretroviral therapy (ART), was discovered and the trajectory of the pandemic was transformed in ways predictable and entirely unpredictable.