How to Create Your Own Online Board Game 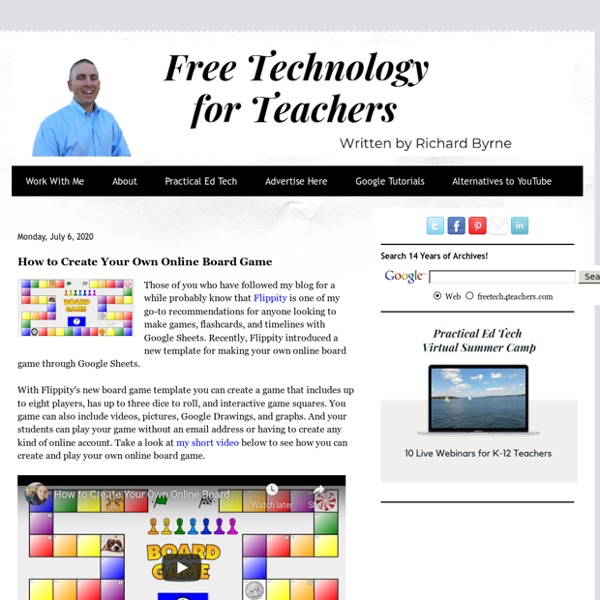 Those of you who have followed my blog for a while probably know that Flippity is one of my go-to recommendations for anyone looking to make games, flashcards, and timelines with Google Sheets. Recently, Flippity introduced a new template for making your own online board game through Google Sheets. With Flippity's new board game template you can create a game that includes up to eight players, has up to three dice to roll, and interactive game squares. You game can also include videos, pictures, Google Drawings, and graphs. And your students can play your game without an email address or having to create any kind of online account. Take a look at my short video below to see how you can create and play your own online board game. Key points from the video: You can customize the player markers and use pictures instead of the default markers. Applications for Education

The Easiest Way to Use Jamboard in Google Meet A few weeks ago Google announced that Jamboard would be integrated into Google Meet. Earlier this week that finally happened in all of my Google accounts. This makes it easier than ever to use Jamboard in Google Meet. 5 Best Free Video Editing Software for Chromebook [Updated 2019] - Are Chromebooks good for video editing? - What are the best free video editors for Chromebook? - Can you do video editing on a Chromebook? - Or does Google have a video editor? If you have tried to search Chromebook on the searching engine like Google, you can easily find questions as the above. Chromebooks are definitely awesome machines, which can perform many of the same tasks as Windows and macOS. 12 Virtual Team Building Activities and Games to Boost Morale Facebook Twitter Pinterest

Five conversations to avoid this year This post has been languishing among my drafts for over a month. I keep coming back to it, trying to sweeten it up, and ending up with something more acerbic than what I started with. Just before the new year, Jennifer LaGarde (The Adventures of Library Girl) posted a thoughtful list of questions reflective librarians should consider in their practice this year. If you are looking for a constructive and positive post - something upbeat and hopeful - stop reading this now and read that instead. How to Build a Digital Escape Room Using Google Forms — Bespoke ELA: Essay Writing Tips + Lesson Plans Escape rooms are all the rage among students today! I will admit that I was slow to jump on the bandwagon due to the time constraints I have as a teacher to commit to building one of these, but then I learned about digital escape rooms using Google Forms and decided to give it a try! I found that these were fairly easy to create and didn’t require many supplies such as locks, boxes, maps, etc. So, I got to work and created my very first digital escape room, which you can find for sale here. For this digital escape room, I created five separate tasks that target literary devices and close reading skills in order to derive the passwords needed to unlock each digital lock. I turned it into a Super Mario Brothers’ themed game where each lock represented defeating a villain from the old original Super Mario Brothers game (because I’m a child of the 80s, and this is my only video game reference— lol!).

COVID school: Online class is making students fail. Do grades matter? Across the country, students are struggling to focus and retain information with online learning, and many feel they are learning less than past years. USA TODAY It wasn’t until several weeks ago that Christopher Lamar discovered he was failing most of his classes. Lamar, an 18-year-old senior at Lake Nona High School in Orlando, Florida, had always enjoyed being a student. Kicking Off Our You've Been Book'd Reading Program For The Year! Here Is How You Can Too! During Teacher Appreciation Week, we started something new from the library with a little help from our families at Van Meter in the VMEPC. I saw this adorable idea during Read Across America Week from Weaver Elementary on Twitter called You've Been Book'd! I love this! What a special way to get more books into classrooms and the hands of teachers and students. For our You've Been Book'd program at Van Meter, we wanted to put a bit of a different spin on it for our elementary. With our You've Been Book'd program, there will be six You've Been Book'd bags.

40+ FREE digital escape rooms (plus a step by step guide for creating your own) Escape rooms are a fun adventure where you solve puzzles to escape from the room in a short amount of time. I love creating physical escape rooms in my classroom. They are fun and they get the students up and moving in the classroom. However, there are a few drawbacks to physical escape rooms. I have large classes, so usually I need two sets running at the same time. Even with two escape room sets, not everyone will solve every clue.

100+ BEST Chrome Extension in 2020 Chrome extensions are small software modules that help you to customize your browsing experience. These tools include adding new browser features or modifying the current behavior of the program to make it convenient. Following is a handpicked list of Top Google Chrome Extensions. The list contains both open source (free) and commercial (paid) extensions. The extensions are organized in following categories: Productivity Story Spheres - Create Immersive Audio Tours of Interesting Places Story Spheres is a neat tool for adding audio recordings to 360 imagery. Story Spheres lets you upload short audio recordings in which you describe to viewers what they're seeing, the history of what they're seeing, and the significance of what's in the scene they're seeing. It's possible to upload multiple recordings. When you're done you can can share your Story Spheres story in a blog post, on social media, or any other place that you typically post a link. Take a look at this Story Spheres story about Uluru to get a better sense of what can be done with Story Spheres.

Loom - Screencast on Chromebooks, Macs, and PCs Loom is a free screencasting tool that works on Chromebooks, Macs, and Windows computers. Loom is a Chrome extension. With Loom installed you can record your desktop, an individual tab, and or your webcam. That means that you could use Loom to just record a webcam video on a Chromebook. Of course, this also means that you can use Loom to record your webcam while also recording your desktop. Top 30 Education Sites and Apps of 2020 It’s that time of year of year for my annual top sites and apps. Over the past few years there have been lots of tools for flipping a classroom or lesson. However, this time around you will see a wider variety of tools, especially ones that can be used for remote/distance learning due to the worldwide pandemic. Top 30 Sites/Apps of 2020 EssayPop - EssayPop is an innovative cloud-based writing platform that makes it easy for students to create essays.

LOC Mystery Photo Contest - A Good Test of Search Strategies At about this time last year the Library of Congress hosted a mystery photo contest. They're hosting another one right now. Just like last year's contest the challenge is to identify the people in twelve pictures pulled from the library's moving image section. Before you say, "just do a reverse image search" you should know that the LOC has already done that and not found any matches. That's what makes this contest so difficult. Just like last year's contest, this year's LOC Mystery Photo Contest doesn't offer any real prizes other than the satisfaction of being right.