Everything You Need to Know About Building a Great Screencast Video 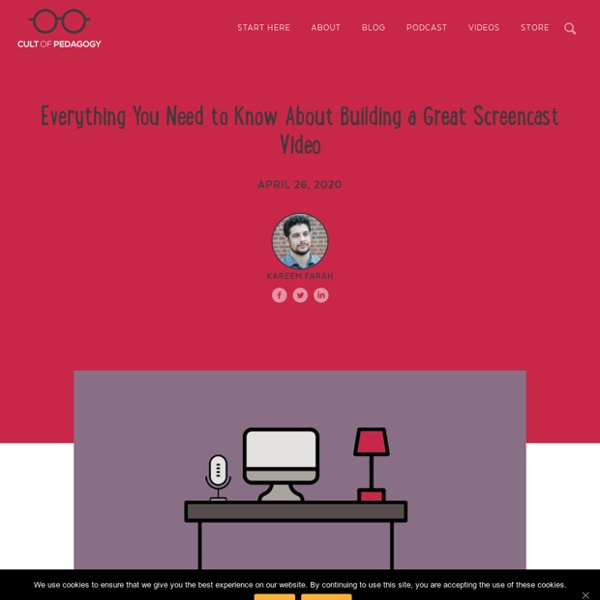 Teaching Students to Disagree Productively On a cool October morning, energy buzzed in a third-grade classroom in western Massachusetts. Students sat on the rug, raising their hands and grinning from ear to ear. As I entered at the back of the room, I was struck to hear the words “I disagree!” coming from the carpet. Between Worlds: How can we harness disruptive technology to reinvent learning experience When people ask me what our best insurance is against being made irrelevant by AI, I always reply: rethink education. On this week’s show, I spoke to someone doing just that. Richard Culatta is the CEO of the International Society for Technology in Education (ISTE), and prior to which, was the chief innovation officer for the state of Rhode Island and the director of the Office of Educational Technology for the U.S.

Born a Crime by Trevor Noah: 9780399588198 “[An] unforgettable memoir.”—Parade “You’d be hard-pressed to find a comic’s origin story better than the one Trevor Noah serves up in Born a Crime. . . . [He] developed his aptitude for witty truth telling [and]…every hardscrabble memory of helping his mother scrape together money for food, gas, school fees, and rent, or barely surviving the temper of his stepfather, Abel, reveals the anxious wellsprings of the comedian’s ambition and success. If there is harvest in spite of blight, the saying goes, one does not credit the blight-but Noah does manage to wring brilliant comedy from it.”—O: The Oprah Magazine “What makes Born a Crime such a soul-nourishing pleasure, even with all its darker edges and perilous turns, is reading Noah recount in brisk, warmly conversational prose how he learned to negotiate his way through the bullying and ostracism. . . .

MindShift: High schoolers share how missing out on seminal events like prom and graduation have affected their mental state "It’s Friday, June 5th and today I graduated high school from my couch. They showed graduation slides with the graduate’s name, photo and message and I got pretty excited when I finally saw my slide after probably 200 other slides. But my heart kind of dropped when the announcer pronounced my name wrong. How to Be an Anti-racist Teacher I have seen some of these very same students walk into another teacher’s classroom, go to the last row of desks, and put their head down. I have seen them sit frozen in their seat, staring at an assignment—when earlier I had heard them make jokes, talk excitedly about the content of their history class, celebrate solving a vexing algebra equation, or shake a test tube with authority, waiting for a result. Their report cards often reveal this disparity in classroom experiences: A’s and B’s in classes where they feel valued and C’s, D’s, or even F’s in classes where they don’t.

Mindshift: How Culturally Relevant Teaching Can Build Relationships While Students Are Home Teachers submitted resources and lesson plans relevant to the times and students' experiences. There were resources on understanding the virus and how to interpret pandemic data. Coronavirus brought renewed attention to systemic racism because of the way Black, Indigenous and Latino people died from the infection at disproportionate rates.

The Reading List Behind ‘Nice White Parents’ “Nice White Parents” is a new podcast from Serial Productions, a New York Times Company, about the 60-year relationship between white parents and the public school down the block. Listen to the first two episodes now and keep an eye out for new episodes each Thursday, available here and on your mobile device: Via Apple Podcasts | Via Spotify | Via Google “I depended on several excellent archivists and historians to track the history of one school,” said Chana Joffe-Walt of her five-year process reporting “Nice White Parents,” which follows what happened when a group of white families arrived at a predominantly Black and Latino school in New York City. “And there are a few specific books that ran on a loop in my head as I went,” she said.

The Daily: Why Teachers Aren't Ready to Reopen Schools michael barbaro From The New York Times, I’m Michael Barbaro. This is “The Daily.” [music] So far, the debate over school reopenings has been dominated by a president who is determined to send students back into classrooms — archived recording (donald trump) Introducing: Nice White Parents “Nice White Parents” is brought to you by Serial Productions, a New York Times Company. chana joffe-walt From Serial Productions, I’m Chana Joffe-Walt. This is “Nice White Parents,” a series about the 60-year relationship between white parents and the public school down the block — a series that was meant to be told in four episodes. And yet, I’m still talking. I never expected to make a fifth episode.

The Daily: The Science of School Reopenings michael barbaro From The New York Times, I’m Michael Barbaro. This is “The Daily.” Today: Across the world, no country with infection rates as high as the U.S. has tried to reopen schools. Just Mercy - Watch Now Profile of a 5th grade chorus remote learning experience gregg breinberg Hi, Savannah. Good morning. savannah Morning. Stamped: Racism, Antiracism, and You: A Remix of the National Book Award-winning Stamped from the Beginning eBook: Reynolds, Jason, Kendi, Ibram X.: Kindle Store

The Reveal podcast by The Center for Investigative Reporting: Discussion of how the digital divide has led to drastically unequal remote learning experiences Reported by: Will Carless Produced by: Patrick Michels, Michael I Schiller, Anayansi Diaz-Cortes and Kevin Sullivan Edited by: Brett Myers and Esther Kaplan Production Manager: Mwende Hinojosa