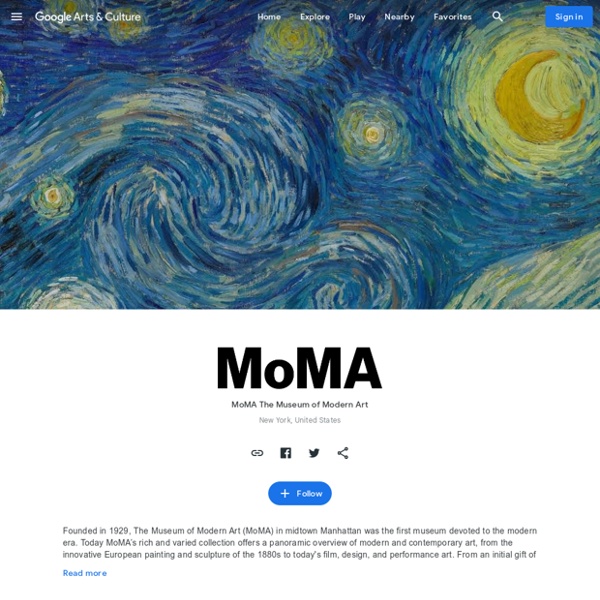 Founded in 1929, The Museum of Modern Art (MoMA) in midtown Manhattan was the first museum devoted to the modern era. Today MoMA’s rich and varied collection offers a panoramic overview of modern and contemporary art, from the innovative European painting and sculpture of the 1880s to today's film, design, and performance art. From an initial gift of eight prints and one drawing, the collection has grown to include over 150,000 paintings, sculptures, drawings, prints, photographs, architectural models and drawings, and design objects; approximately 22,000 films and four million film stills; and, in its Library and Archives, over 300,000 books, artist books, and periodicals, and extensive individual files on more than 70,000 artists. Collection highlights include Claude Monet’s Water Lilies, Vincent van Gogh’s The Starry Night, and Pablo Picasso’s Les Demoiselles d'Avignon, along with more recent works by Andy Warhol, Elizabeth Murray, Cindy Sherman, and many others.

The Met 360° Project This award-winning series of six short videos invites viewers around the world to virtually visit The Met's art and architecture in a fresh, immersive way. Created using spherical 360° technology, it allows viewers to explore some of the Museum's iconic spaces as never before. Viewed more than 11 million times, this series affords an access and a perspective typically unavailable to the public. National Museum of Women in the Arts, Washington, D.C., États-Unis Founded in 1981 and opened in 1987, the National Museum of Women in the Arts (NMWA) is the only museum solely dedicated to celebrating the achievements of women in the visual, performing and literary arts. The museum’s collection features 5,000 works from the 16th century to the present created by more than 1,000 artists, including Mary Cassatt, Frida Kahlo, Alma Thomas, Lee Krasner, Louise Bourgeois, Chakaia Booker, and Nan Goldin, along with special collections of 18th-century silver tableware, botanical prints, and artists’ books. NWMA brings recognition to the achievements of women artists of all periods and nationalities by exhibiting, preserving, acquiring, and researching art by women and by teaching the public about their accomplishments.

Street View Home Explore Nearby Favorites Sign in Loading… Musée du quai Branly In the heart of Paris's museum land, neighbouring the Louvre and the Musée d’Orsay, a few minutes from the Grand and Petit Palais, the Palais de Tokyo and the Musée d’art moderne de la Ville de Paris, the Musée du quai Branly - Jacques Chirac has an exceptional location on the banks of the River Seine, at the foot of the Eiffel Tower. The arts of Africa, Oceania, Asia, and the Americas now form part of the historical and artistic grand tour of the capital. The Musée du quai Branly - Jacques Chirac is an innovative cultural institution - museum, educational and research centre, and public living space all in one. Built on one of the last available sites in the heart of Paris, the architectural design of this original project is the work of Jean Nouvel.

Des musiques à écouter Ramin Karimloo heightens each sensation with this spellbinding version of the Music of The Night live from the Royal Albert Hall accompanied by Sierra Boggess! From Phantom of The Opera at the Royal Albert Hall (2011): In celebration of the 25th Anniversary of Andrew Lloyd Webber's The Phantom of the Opera, Cameron Mackintosh produced a unique, spectacular staging of the musical on a scale which had never been seen before. Inspired by the original staging by Hal Prince and Gillian Lynne, this lavish, fully-staged production set in the sumptuous Victorian splendour of London's legendary Royal Albert Hall features a cast and orchestra of over 200, plus some very special guest appearances. Donate to these worthwhile arts causes:

360° videos Home Explore Play Nearby Galerie des Offices, Florence The Uffizi was designed by Giorgio Vasari in 1560 for Cosimo I de'Medici to house the Granducal Magistratures of Tuscany. Over time, the top floor loggia became an exhibition of the dynastic collection of ancient sculpture, artwork and artifacts. The eastern wing of the building incorporated the ancient Florentine church of San Pier Scheraggio and the wing to the west connected with two existing buildings, the Mint and the Loggia dei Lanzi. Vasari conceived an architectural module to be repeated all along the building: a portico flanked by two pillars, with niches on the ground floor and three windows on the upper story.

American Museum of Photography We bill ourselves as "A Museum Without Walls... For An Art Without Boundaries." Even though we have no walls, we do have "floors," separate areas for different activities. At the bottom of most pages, you'll find a navigation bar that will let you choose our Exhibitions floor, our Main Entrance floor, our Research Center or our Museum Shops. Leopold Museum, Vienna, Autriche It took five decades to compile the collection. In 2001 it found its definite location. Together with the Republic of Austria and the Austrian National Bank, the collector Dr. Rudolf Leopold, who died in 2010 at the age of 85, consolidated his collection, which is now exhibited in a museum built by the Austrian state, into a private foundation.

The National Theatre is going to stream a free play every Thursday night As numerous theatrical institutions across the world have opened up their archives in response to increasing lockdown restrictions, all eyes have remained on one organisation: the National Theatre in London, which has the greatest archive of cinema-quality recordings of stage plays of any theatre on the planet, thanks to its formidable NT Live programme. It’s designed to beam productions from the NT into cinemas across the country, but there are of course no cinemas in operation at present. So the NT is switching to its YouTube channel.