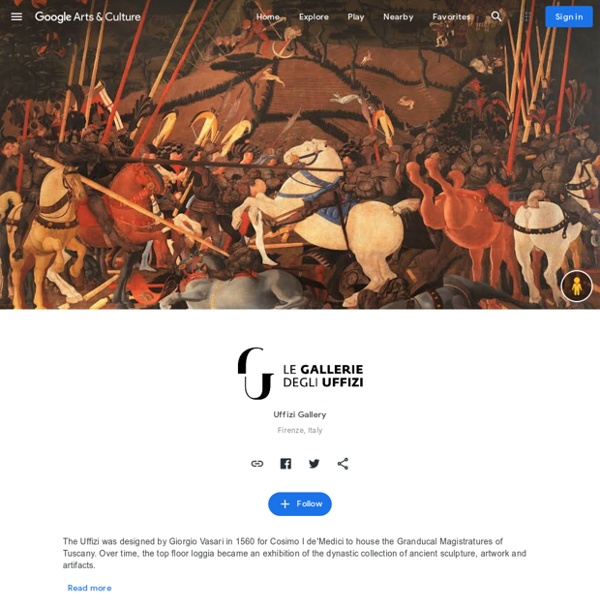 The Uffizi was designed by Giorgio Vasari in 1560 for Cosimo I de'Medici to house the Granducal Magistratures of Tuscany. Over time, the top floor loggia became an exhibition of the dynastic collection of ancient sculpture, artwork and artifacts. The eastern wing of the building incorporated the ancient Florentine church of San Pier Scheraggio and the wing to the west connected with two existing buildings, the Mint and the Loggia dei Lanzi. Vasari conceived an architectural module to be repeated all along the building: a portico flanked by two pillars, with niches on the ground floor and three windows on the upper story. In 1565, on the occasion of the marriage of his son Francesco to Giovanna d'Austria, Cosimo I asked Vasari to design a raised passageway connecting Palazzo Vecchio with Palazzo Pitti, the new residence of the family.

Musée du Prado les collections Welcome to the Museo del Prado, an institution dating back almost 200 years and one whose origins and unique nature are largely due to the collecting tastes of Spain’s 16th- and 17th-century monarchs. Collecting at that period differed from the present day. Rather than aiming at comprehensiveness, collectors aimed to assemble as many works as possible by their favourite artists. National Museum of Modern and Contemporary Art, Séoul, Corée du Sud Since opening its door in 1969, the National Museum of Modern and Contemporary Art (MMCA), Korea has lived through the history of Korean art. In the process, MMCA established itself as a representative institution of Korean modern art. The museum’s four branches, including Gwacheon (opened in 1986), Deoksugung (opened in 1998), Seoul (opened in 2013), and Cheongju (expected to open in 2017), each in its own way, will continue to carry out MMCA’s commitment to the art and culture of Korea by enriching the first-hand cultural experience of the viewing public.

Musée du costume at the national theatre - embed.culturalspot Costume informs the audience about a character, their social position, personality, and contributes to the creation of the world of a play. For many actors, putting on their costume is an important part of getting into character before going on stage. It can affect their posture and how they move.

Taj Mahal, India In The New Seven Wonders Of The World list Taj Mahal, a mosque-mausoleum located in Indian city of Agra, takes a very important place. In spite of its Muslim origin this white marble necropolis became an actual symbol of India. Serious security measures are taken to protect it. There is a special 500-meter security zone established around the complex.

Leopold Museum, Vienna, Autriche It took five decades to compile the collection. In 2001 it found its definite location. Together with the Republic of Austria and the Austrian National Bank, the collector Dr. Rudolf Leopold, who died in 2010 at the age of 85, consolidated his collection, which is now exhibited in a museum built by the Austrian state, into a private foundation. Alte Nationalgalerie, Staatliche Museen zu Berlin, Berlin, Germany The Alte Nationalgalerie is the original home of the Nationalgalerie, whose collections today are divided between the Neue Nationalgalerie, the Hamburger Bahnhof – Museum für Gegenwart – Berlin, the Friedrichswerdersche Kirche, Museum Berggruen and the Sammlung Scharf-Gerstenberg. The idea of establishing a cultural and educational centre across from the Berlin Palace dates back to the time of Friedrich Wilhelm IV, who dreamt of creating a "sanctuary for art and science" on the site. The basic architectural concept for the Alte Nationalgalerie – a temple-like building raised on a plinth decorated with motifs from antiquity – came from the king himself. The building was designed by Friedrich August Stüler, a student of Schinkel who also designed the Neues Museum. It was completed after Stüler’s death by another of Schinkel’s students, Johann Heinrich Strack.