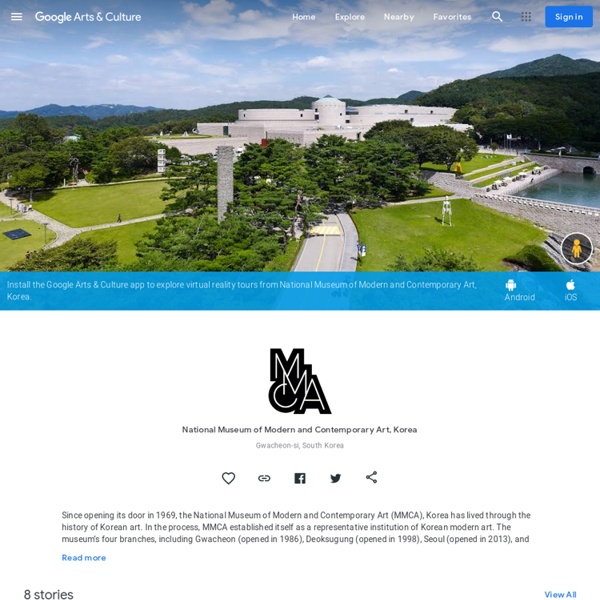 Since opening its door in 1969, the National Museum of Modern and Contemporary Art (MMCA), Korea has lived through the history of Korean art. In the process, MMCA established itself as a representative institution of Korean modern art. The museum’s four branches, including Gwacheon (opened in 1986), Deoksugung (opened in 1998), Seoul (opened in 2013), and Cheongju (expected to open in 2017), each in its own way, will continue to carry out MMCA’s commitment to the art and culture of Korea by enriching the first-hand cultural experience of the viewing public. Boasting a superb natural landscape surrounding the site, MMCA Gwacheon will be devoted to various genres of visual arts such as architecture, design, and crafts. Located within a historical site, MMCA Deoksugung will showcase modern art from Korea and overseas. In the heart of the city, MMCA Seoul will focus on introducing global contemporary art.

Thyssen-Bornemisza Museo Nacional - Rembrandt and Amsterdam Portraiture, 1590 - 1670 For the first time in Spain, the museum is presenting an exhibition on Rembrandt’s activities as a portraitist, a genre in which the most important Dutch painter of the 17th century also reached the highest level. Together with around thirty nine of his portraits, the exhibition will include major examples by other artists active alongside him in Amsterdam during the Dutch Golden Age, with a total of 80 paintings, 16 prints and an etching plate, some never previously seen in Europe. When Rembrandt arrived in Amsterdam in the early 1630s the city already counted on portraitists such as Thomas de Keyser and Frans Hals - resident in the nearby city of Haarlem but with clients in the capital - who responded to a significant market demand for such works.

Louvre Museum's Visitor Trails Here, Ingres transposed the antique theme of the female nude to the Near East, a place he had traveled to only in his dreams and the pretext for the sensual image of a naked woman in a harem—hence the title, The Large Odalisque—set against an exotic background. Until the end of his life, Ingres continued to paint exotic scenes and female nudes, one of his favorite subjects—as in The Turkish Bath—drawing on influences as diverse as Raphael, the Mannerists, and Persian miniatures. Whereas Ingres, like his master David, was a classical artist in terms of technique and his interest in antiquity, which he showed in other works, he distanced himself from this trend by giving priority to draftsmanship, pure lines, and sensual curves, distorting anatomical reality if necessary. This odalisque has three vertebrae too many. Likewise, her right breast and left leg are joined to the rest of the body in a curious fashion.

Leopold Museum, Vienna, Autriche It took five decades to compile the collection. In 2001 it found its definite location. Together with the Republic of Austria and the Austrian National Bank, the collector Dr. Rudolf Leopold, who died in 2010 at the age of 85, consolidated his collection, which is now exhibited in a museum built by the Austrian state, into a private foundation. National Museum of Women in the Arts, Washington, D.C., États-Unis Founded in 1981 and opened in 1987, the National Museum of Women in the Arts (NMWA) is the only museum solely dedicated to celebrating the achievements of women in the visual, performing and literary arts. The museum’s collection features 5,000 works from the 16th century to the present created by more than 1,000 artists, including Mary Cassatt, Frida Kahlo, Alma Thomas, Lee Krasner, Louise Bourgeois, Chakaia Booker, and Nan Goldin, along with special collections of 18th-century silver tableware, botanical prints, and artists’ books. NWMA brings recognition to the achievements of women artists of all periods and nationalities by exhibiting, preserving, acquiring, and researching art by women and by teaching the public about their accomplishments.

National Museum - New Delhi, New Delhi , Inde — Google Arts & Culture The National Museum, New Delhi as we see it today in the majestic building on the corner of Janpath and Maulana Azad Road is the prime museum in the country. The blue-print for establishing the National Museum in Delhi had been prepared by the Gwyer Committee set up by the Government of India in 1946. When an Exhibition of Indian Art consisting of selected artefacts from various museums of India, sponsored by the Royal Academy (London) with the co-operation of the Government of India and Britain, was on display in the galleries of Burlington House, London during the winter months of 1947-48, it was decided to display the same collection under a single roof in Delhi before the return of exhibits to their respective museums. Accordingly, the exibition was held in the state rooms of the Rashtrapati Bhawan, New Delhi in 1949, and it turned out to be a great success. In turn, the event proved responsible for the creation of National Museum.