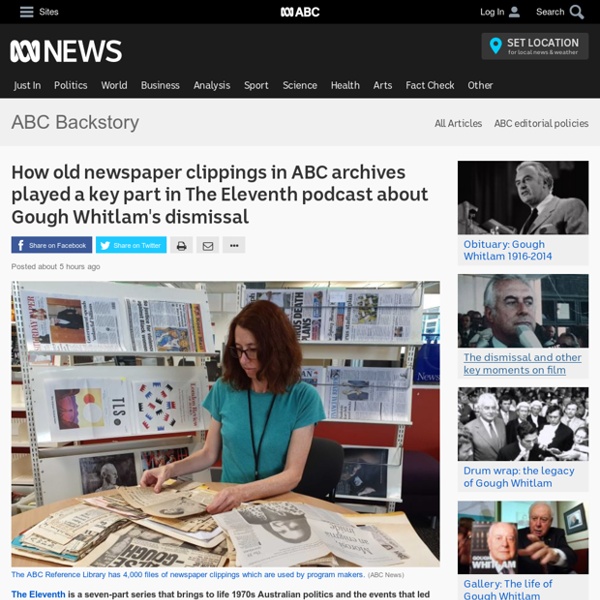 The Eleventh is a seven-part series that brings to life 1970s Australian politics and the events that led to the sacking of the 21st Australian Prime Minister Gough Whitlam for an audience who didn't live through it. The Eleventh podcast audio player teaser The Eleventh INTRODUCING — The Eleventh What do you know about the 11th of November 1975? The Eleventh podcast relives the dramatic series of events that shook the foundations of Australia's democracy. "We set out to make a really contemporary-sounding series," says The Eleventh executive producer Nikki Tugwell. "We wanted to find untold stories, first-hand accounts and take the audience back into the moment, like they were experiencing it as it unfolded." She says the ABC Reference Library team played a key role in bringing the series to life. Since 1963, newspaper clippings have been carefully filed at the ABC, initially as a resource for the Four Corners program. An article from The Sun newspaper about Junie Morosi in December, 1974. "Oh!

Inside the title fight: The war of words over Dr Jill Biden points to an unfair history "Each day on twitter there is one main character," a user of the microblogging website once wrote. "The goal is to never be it." Sage words, to be sure. But earlier this week, Wall Street Journal columnist Joseph Epstein comprehensively failed to live up to this lofty ideal. If you managed to miss it: Epstein, a writer and editor, called on first lady-elect Jill Biden to cease using the title "doctor". Federal Government handed almost $1m in contracts to controversial aged care executive Gary Barnier - ABC News The Federal Government handed almost $1 million in contracts to a controversial aged care executive without contacting any other potential suppliers. Key points: Gary Barnier left Opal Aged Care after bullying allegations against himMr Barnier rejects the allegations and an investigation made no findings against him Mr Barnier is now contracted to give advice on aged care to the Federal Government The Health Department earlier this year engaged Gary Barnier, who previously led Australia's largest nursing home chain, Opal Aged Care. Mr Barnier resigned from Opal in 2017 after 7.30 highlighted Opal's neglect of some residents and raised concerns about his personal behaviour towards customers and their families. The department — which oversees aged care in Australia — has now handed a company he owns and runs two major contracts to help prevent nursing home operators from financially collapsing.

Tasmania's 150yo Don River Railway plea for funding to survive - ABC News (Australian Broadcasting Corporation) Updated about an hour agoSat 16 Jan 2021, 11:19pm The Don River in Tasmania's north-west, near Devonport, has long been characterised by the whistles and chugs of its railway. Key points: The rail was established in the 1850s to transport timber and coalFrom the mid-1970s, the line became a tourist attraction The railway's committee says expanding the business is key to its future Meet the woman heading $1 trillion investor group ACSI unseating corporate Australia's main men for their 'misdeeds' When news emerged that Boe Pahari was promoted to run AMP's largest and most profitable division, AMP Capital, after a former female employee had settled a sexual harassment claim with the financial services giant, investors reacted. Key points: The ACSI is influencing companies to act on issues including executive pay and climate changeIts CEO had a busy year dealing with the chairmen of AMP and Rio TintoACSI wants companies to start measuring performance beyond financial metrics The complainant, Julia Szlakowski, left the company with her career shattered, while Mr Pahari copped a financial penalty but was initially promoted as AMP found the complaint to be "lower-level breaches" of its code of conduct.

Dan Murphy's Darwin store still unclear but NT Government could step in again to help out - ABC News Chief Minister Michael Gunner has flagged further potential intervention in the long-running bid to open a large-scale Dan Murphy's outlet in Darwin, as the liquor giant looks set to stretch its licence battle into a fifth year. Key points: A Labor spokesman says the Government wants the controversial application "resolved" as quickly as possibleWoolworths' Endeavour Drinks Group has lobbied for an overriding ministerial power to approve licencesChief Minister Michael Gunner is refusing to say what action the Government is considering A second appeal against the refusal of the licence by the Northern Territory Liquor Commission, which was set up by Labor, now looks likely to be pushed out from the date set for December. Woolworths' Endeavour Drinks Group (EDG) sought the postponement and has blamed the delay on staff illness and difficulties preparing evidence caused by COVID-related restrictions.

Most of Melbourne's slum pockets were demolished, but a few survived - ABC News (Australian Broadcasting Corporation) Updated about 2 hours agoSun 17 Jan 2021, 9:57pm The only reason a photo of Ward's Lane exists is because the street was considered a good example of a terrible place to live. Social reformer F Oswald Barnett came to take a photo of it in the early 1930s as part of his campaign to rid Melbourne of its slums. It was a grim, tough-looking little street behind St Vincent's Hospital in the inner-Melbourne suburb of Fitzroy. In Barnett's photo, everything seems to lean — the fences, the walls, the telegraph poles — nothing looks even.

Dick, Kerr Ladies attracted 53,000 fans on Boxing Day 100 years ago. A year later, they were banned The year is 1920. It's Boxing Day and Goodison Park stadium in Liverpool is packed to the rafters with 53,000 supporters. As many as 14,000 fans have been left outside, unable to get into the ground. However, this capacity crowd is not there to see the male players of two-time First Division and 1906 FA Cup champions, Everton. Impoverished Australians are choosing to take their chances over 'punitive' JobSeeker - ABC News Being poor is not something Catriona McMillan feels she should be ashamed of, but it is still an "embarrassing" admission. Key points: Senate Estimates has revealed the Government has no definition for povertySociologist Eva Cox says a poverty line should be used by the welfare sector to hold the Government to accountThe author of On Money believes the welfare system in its current form punishes poor people From a loving family of limited means, she has battled the welfare system for years while trying to complete her archaeology degree. Despite a cut to her work hours earlier this year due to COVID-19, the English tutor will not apply for JobSeeker after her "genuinely traumatising" experience. "It's almost hard not see it as deliberately difficult to navigate, as if the goal is to confuse you so much you will opt out of it.