How old newspaper clippings in ABC archives played a key part in The Eleventh podcast about Gough Whitlam's dismissal - Radio - ABC News. The Eleventh is a seven-part series that brings to life 1970s Australian politics and the events that led to the sacking of the 21st Australian Prime Minister Gough Whitlam for an audience who didn't live through it. 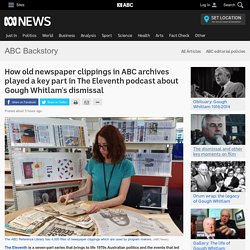 The Eleventh podcast audio player teaser The Eleventh INTRODUCING — The Eleventh What do you know about the 11th of November 1975? The Eleventh podcast relives the dramatic series of events that shook the foundations of Australia's democracy. "We set out to make a really contemporary-sounding series," says The Eleventh executive producer Nikki Tugwell. "We wanted to find untold stories, first-hand accounts and take the audience back into the moment, like they were experiencing it as it unfolded.

" She says the ABC Reference Library team played a key role in bringing the series to life. Since 1963, newspaper clippings have been carefully filed at the ABC, initially as a resource for the Four Corners program. An article from The Sun newspaper about Junie Morosi in December, 1974. Victorian Supreme Court orders temporary halt to logging due to impact of Gippsland bushfires. Updated about 3 hours agoThu 30 Jan 2020, 5:35am The future of the Victorian native timber industry has been dealt a further blow after the Supreme Court ordered a halt to logging due to the impact of this summer's bushfires. 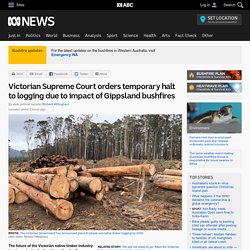 The Supreme Court temporarily halted logging in three areas near Healesville, ahead of a full hearing in FebruaryThe environmental group that launched the action fears bushfires in Gippsland destroyed the habitat of threatened species including the greater gliderThe decision puts extra strain on the industry after the Victorian Government announced native timber logging would be phased out by 2030. An environmental group argued in court that the devastation of the East Gippsland fires had placed further strain on threatened species in the state, and that areas untouched by fire in the Central Highlands, near Healesville, must not be logged. "There has been impact from these fires, and we will have to assess what that impact is. " 5 Ways Writers Use Misleading Graphs To Manipulate You [INFOGRAPHIC]

In this post-truth era, graphs are being used to skew data and spin narrative like never before. Especially with the velocity at which some of these topics spread across social media. All it takes is a single graph from a less-than-reputable source, blasted out to a list of followers, to spread a false narrative around the world. We have already seen this happen many times during the COVID-19 response, which is why we added a new section featuring a few of those misleading graphs! Now the data doesn’t even have to be bad–it could just be presented in a misleading way. I mean, there is a whole Wikipedia page, Reddit community, and hundreds of articles about how graphs can be used to misinform readers. Now, I can’t make these data-skewing creators stop, but I can help you spot these misleading graphs when they crop up. Not a designer? Portraits with fridges, cars and televisions: The evolution of the family photograph in Australia. Posted While the ritual of documenting family history has remained a feature for most Australians, it's the situations and locations in photographs that often reveal so much about our modern-day lives. 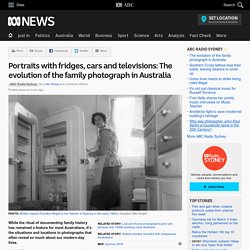 Alistair Thomson is a professor of history at Monash University. During his research and teachings into post-war migration to Australia, he observed how family photographs have evolved over time, particularly what is included in the frame. "The who we photograph has changed less than what we photograph," he told Tony Arthur on ABC Radio. Professor Thomson said family portraits in Australia flourished when cameras became affordable to the average person during the 1950s and '60s. However, unlike today's digital technology with which thousands of photos can be taken without a cost, film imagery brought a selectiveness with what was documented.