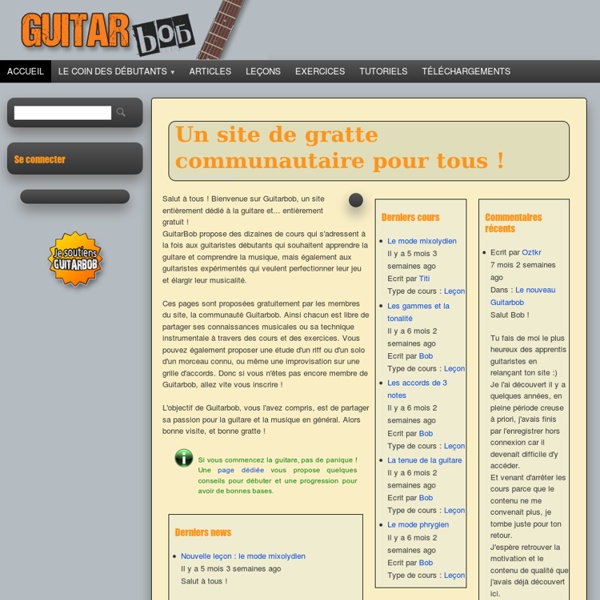 Guitar/Guitar Chords Song Library The following is a list of notable easy to learn guitar songs from the 1950s to the present. It also contains links to external websites containing different informal chords to songs which represent many different authors' own interpretations of the original songs. Most of the chords on the list are relatively easy to learn, and would be a great start for novice guitar players who are interested in improving their playing abilities. The technical difficulty and skill level required to play each of the songs is defined with a star rating system: - Easy Song - Intermediate Song - Difficult Song Basic Guitar Chord Patterns

Speed exercises for guitar - StumbleUpon I've used these myself, and have found them to be quite amazing, both in strengthening your fingers and in training your mind. If you look at the patterns, they represent the three patterns that most scales are composed of: Half step -whole step, whole step - half step, whole step - whole step. If you get fast enough at playing it, people will worship you.

210 Awesome Open Guitar Chords and How to Use Them - A Kings Mercury Are you bored of the sound of standard chords? Then, using open guitar chords is a way to pimp up your playing and boring chord progressions. There are thousands of open guitar chords and millions of ways to use them creatively. Cutting a Fanned-Fret Fretboard Here's a simple method for accurately slotting a Fanned-Fret fretboard using standard fretting templates. I made two saw guides out of 1/2" aluminum angle stock, slotting one edge of each on my table saw to the two different scales, using my usual Stew-Mac blade and templates. Then I double-stick taped them to the fretboard and sawed the slots with a backsaw, using the slots in the aluminum to guide the saw.

Guitars Lefty Gibson ES-345 Gibson's ES-345 appeared in 1959, following closely on the heels of Gibson's original semi-hollowbody model, the ES-335, and the fancier ES-355. The 345's double-parallelogram fingerboard inlaytook the middle position in ornamentation between the 335's dots and the 355's pearl blocks. Like the ES-355 of 1959, the 345 was outfitted with stereo electronics and a Varitone tone selector. Gibson's hollowbody trio sold in reverse proportion to price, so the ES-345's are not as plentiful as 335s.