The Story of Us: Intro — Wait But Why 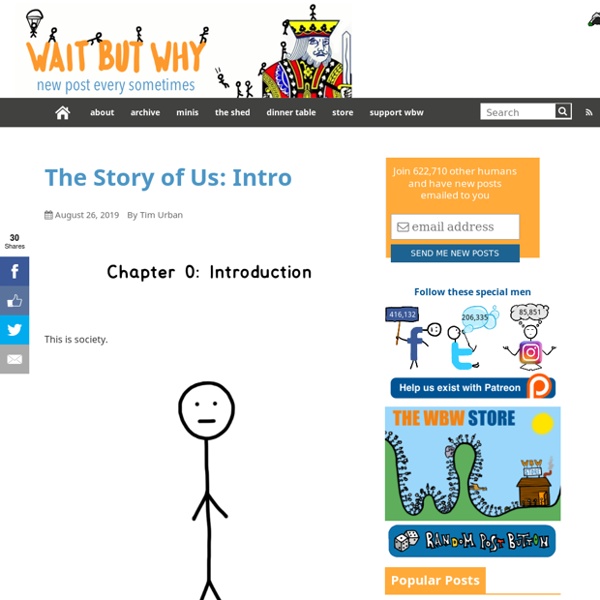 This is society. Now let’s zoom in on the left arm. Further. Okay see those skin flaps on the elbow? Let’s zoom in on the bottom one. Little more. There! Hi. So let me explain why we’re here. As a writer and a generally thinky person, I’ve spent a lot of my life thinking about the society I live in, and societies in general. When you’re a single cell in the body of a giant, it’s hard to understand what the giant’s doing, or why it is the way it is, because you can’t really zoom out and look at the whole thing all at once. The thing is, when I’ve recently tried to imagine what society might look like, I haven’t really been picturing this: Based on what I see around me, in person and online, it seems like my society is actually more like this: Individual humans grow older as they age—but it kind of seems like the giant human I live in has been getting more childish each year that goes by. So I decided to write a blog post about this. Don’t do it. They were right. One last thing. And away we go…

Related:  Websites useful or fun • And Now for Something Completely Different-(No, M. Python at Amusements) • Something good this way comes.... • US • Experiential.ally

List of redheads Figures from the Bible or classical mythology, such as Esau or Judas Iscariot, are included. Characters from modern fiction such as Anne of Green Gables or Ginger Hebblethwaite are not. The term 'Redhead' is also popularized by the American Archie comics where the titular main character, teenager Archie Andrews, has red hair and a Scottish family background. He is often addressed as 'redhead' or 'redheaded junk' by his archrival Reggie Mantle. A[edit] B[edit] Wireless sensors stick to skin and track health We tend to take our skin’s protective function for granted, ignoring its other roles in signaling subtleties like a fluttering heart or a flush of embarrassment. Using metallic ink, researchers screen-print an antenna and sensor onto a stretchable sticker designed to adhere to skin and track pulse and other health indicators, and beam these readings to a receiver on a person’s clothing. (Image credit: Bao Lab) Now, Stanford engineers have developed a way to detect physiological signals emanating from the skin with sensors that stick like band-aids and beam wireless readings to a receiver clipped onto clothing. To demonstrate this wearable technology, the researchers stuck sensors to the wrist and abdomen of one test subject to monitor the person’s pulse and respiration by detecting how their skin stretched and contracted with each heartbeat or breath.

The 1619 Project In August of 1619, a ship appeared on this horizon, near Point Comfort, a coastal port in the English colony of Virginia. It carried more than 20 enslaved Africans, who were sold to the colonists. No aspect of the country that would be formed here has been untouched by the years of slavery that followed. Felicific calculus The felicific calculus is an algorithm formulated by utilitarian philosopher Jeremy Bentham for calculating the degree or amount of pleasure that a specific action is likely to cause. Bentham, an ethical hedonist, believed the moral rightness or wrongness of an action to be a function of the amount of pleasure or pain that it produced. The felicific calculus could, in principle at least, determine the moral status of any considered act. The algorithm is also known as the utility calculus, the hedonistic calculus and the hedonic calculus. Intensity: How strong is the pleasure?Duration: How long will the pleasure last?

Media Bias Chart, 3.1 Minor Updates Based on Constructive Feedback - ad fontes media So why is it time for another update to the Media Bias Chart? I’m a strong believer in changing one’s mind based on new information. That’s how we learn anyway, and I wish people would do it more often. I think it would lead to nicer online discussions and less polarization in our politics. Perhaps people don’t “change their minds based on new information” as much as they should because it is often framed more negatively as “admitting you are wrong.” Mathematical framework turns any sheet of material into any shape using kirigami cuts Researchers from the Harvard John A. Paulson School of Engineering and Applied Sciences (SEAS) have developed a mathematical framework that can turn any sheet of material into any prescribed shape, inspired by the paper craft termed kirigami (from the Japanese, kiri, meaning to cut and kami, meaning paper). Unlike its better-known cousin origami, which uses folds to shape paper, kirigami relies on a pattern of cuts in a flat paper sheet to change its flexibility and allow it to morph into 3-D shapes. Artists have long used this artform to create everything from pop-up cards to castles and dragons. "We asked if it is possible to uncover the basic mathematical principles underlying kirigami and use them to create algorithms that would allow us to design the number, size and orientation of the cuts in a flat sheet so that it can morph into any given shape," said L.

Australian Firefighters Pose With Animals For 2020 Charity Calendar, And The Photos Are So Hot They May Start Fires The perfect mix of manliness, hotness, and kind-hearted softness. Sizzling-hot bad boys with hearts of gold. Animal lovers with spines and abs of steel. There are many ways that I could describe Australian firefighters. But the fact of the matter is simple: they’re everyday heroes who save lives, don’t take off their superhero capes when the fire is out, and stand as an example of how to live your life. This year, once again, the firefighters of Australia are inspiring us to aim for new heights with their 6 new calendars for 2020. America Wasn’t a Democracy, Until Black Americans Made It One My dad always flew an American flag in our front yard. The blue paint on our two-story house was perennially chipping; the fence, or the rail by the stairs, or the front door, existed in a perpetual state of disrepair, but that flag always flew pristine. Our corner lot, which had been redlined by the federal government, was along the river that divided the black side from the white side of our Iowa town.

Related:
Related:  Websites useful or fun   -  And Now for Something Completely Different-(No, M. Python at Amusements)   -  Something good this way comes....   -  US   -  Experiential.ally