A Simple Trick for Success with One-Pagers 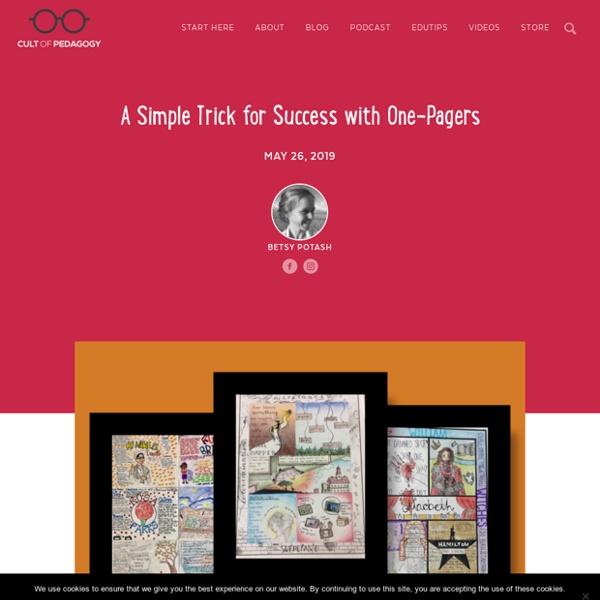 5 Hacks for “Taskifying” the Coursebook After a bit of a longer COVID chaos-enforced hiatus than I would have liked, this guest post is from Neil Anderson. It is a little longer than most posts here – but we will excuse that given the the wealth of knowledge and useful insights into incorporating more of a task-based approach into our lessons. In all honesty, his blog (co-written with Neil McCutcheon) has saved me hours in lesson planning and is one of the few that offers lessons that I don’t feel the need to tweak! Is there a case against coursebooks? You could be forgiven for feeling that discussion of coursebooks – their pros and in particular their cons – has been done to death in recent years. It’s not, though, a topic that will disappear so long as we continue to use them as the basis of our language courses, whether in private language schools or primary / secondary education.

Move Over Debate, It’s Time to Deliberate Do you find yourself shying away from political dialogue or even avoiding it at all costs these days? If so, you’re not alone. In fact, 53% of Americans say talking about politics with people they disagree with is “generally stressful and frustrating” (Pew Research Center, 2018). And it can feel even more risky to integrate discussions about controversial topics into our classrooms. However, schools are an important place for students to learn how to have civic and political discussions with people who have different opinions from their own. In fact, schools are often more diverse than other settings in which youth spend time (Hess, 2009). Current trends in ELT (UK) Around 25 years ago, when I worked at International House London, I used to teach a course called ‘Current Trends in ELT’. I no longer have records of the time so I can’t be 100% sure what was included in the course, but task-based learning, the ‘Lexical Approach’, the use of corpora, English as a Lingua Franca, learner autonomy / centredness, reflective practice and technology (CALL and CD-ROMs) were all probably part of it. I see that IH London still offers this course (next available course in January 2021) and I am struck by how similar the list of contents is. Only ‘emerging language’, CLIL, DOGME and motivation are clearly different from the menu of 25 years ago. The term ‘current trends’ has always been a good hook to sell a product. Each year, any number of ELT conferences chooses it as their theme.

17 Ideas to Help Combat Learned Helplessness By Sarah Tantillo Recently I’ve been thinking about the ways in which we either inculcate or prevent learned helplessness in students. Some teaching practices help strengthen students’ self-efficacy, motivation and confidence, while others have the opposite effect. And the irony is that teachers might not even realize they are doing things that create this opposite effect. Here’s some useful advice, sharing ways to deter “learned helplessness.”

What happens after the story? – Cécile Lainé As a teacher who loves using Story Listening and Reading to facilitate language acquisition, the question I get asked the most is: “What happens after the story?” I am excited to provide a response in this post. Ready? Nothing has to happen after the story. The Key to Better Student Engagement Is Letting Them Show You How They Learn A couple of weeks ago during a coaching session, a middle school teacher I work with described a fun math activity. She asked her students who were learning remotely to build blanket forts. As you might expect, the students calculated the area, perimeter and volumes of their forts.

Psychology for Educators [And More] Research Findings on Studying Effectively Six Key Principles: As teachers, our job is to help students study English more effectively. And generally, we are good at it. We know which language forms they should study first, which vocabulary items they should focus on, etc.

Integrating Critical Thinking Into the Classroom (Opinion) (This is the second post in a three-part series. You can see Part One here.) The new question-of-the-week is: What is critical thinking and how can we integrate it into the classroom? Zooming in and Zooming out A while back I saw a pretty impressive video on youtube and since then the images from it keep filling my head. It begins with a camera shot from space showing earth as a distant object and then gradually moves closer and closer, zooming in on the world, the continent of Europe, the UK, London and then, eventually streets, houses and finally people become visible. Once it’s zoomed in as far as it can go, it slowly zooms back out again until the world is once more just a distant blob.