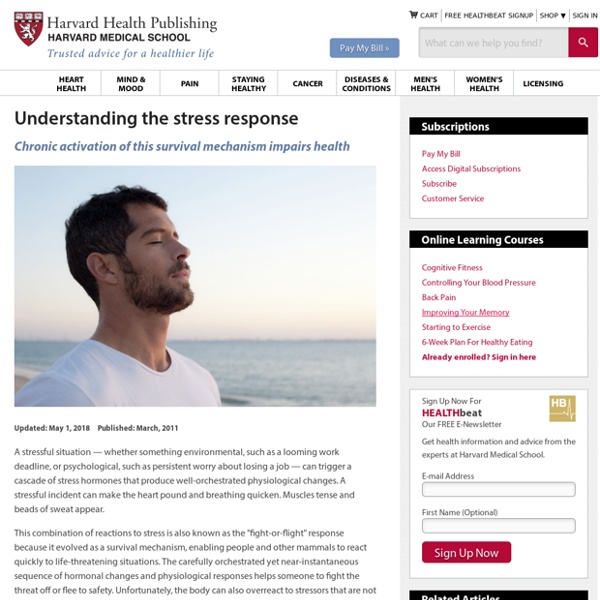 Chronic activation of this survival mechanism impairs health A stressful situation — whether something environmental, such as a looming work deadline, or psychological, such as persistent worry about losing a job — can trigger a cascade of stress hormones that produce well-orchestrated physiological changes. A stressful incident can make the heart pound and breathing quicken. Muscles tense and beads of sweat appear. This combination of reactions to stress is also known as the "fight-or-flight" response because it evolved as a survival mechanism, enabling people and other mammals to react quickly to life-threatening situations. The carefully orchestrated yet near-instantaneous sequence of hormonal changes and physiological responses helps someone to fight the threat off or flee to safety. Over the years, researchers have learned not only how and why these reactions occur, but have also gained insight into the long-term effects chronic stress has on physical and psychological health.

Related:  Mental health • Managing Adolescents Stress • What is stress and how to manage it effectively

What Is Mono No Aware, the Japanese Love for Impermanence? Elena Boils / © Culture Trip Often considered to be untranslatable, mono no aware refers to the bittersweet realization of the ephemeral nature of all things. It is the awareness that everything in existence is temporary. The fleetingness of youth, the fading of romance, and the changing of seasons are not to be mourned, but cherished and appreciated in their impermanence, for that is where their beauty comes from. It is also a really lame tattoo idea, so please resist the urge. Sign Up.

How the Fight or Flight Response Works The fight-or-flight response, also known as the acute stress response, refers to a physiological reaction that occurs in the presence of something that is terrifying, either mentally or physically. The response is triggered by the release of hormones that prepare your body to either stay and deal with a threat or to run away to safety.1 The term 'fight-or-flight' represents the choices that our ancient ancestors had when faced with danger in their environment. They could either fight or flee. Overcoming Stress - IMH Everybody has it, and everybody talks about it, but nobody really knows what stress is. WHY? It is because stress means different thing for each of us, and is also different for each of us. Manage your stress and become more productive rather than self-destructive.

The link between stress and depression … and the 10 simple words that could help It’s a damp, midweek afternoon. Even so, Cardiff’s walk-in stress management course has pulled in more than 50 people. There are teenagers, white-haired older people with walking aids, people from Caucasian, Asian and Middle Eastern backgrounds. Examples of Physical Stress? Examples of physical stress symptoms include headaches, a lack of energy, inability to sleep, chest pain, clenched jaw, loss of sexual ability and stomach problems. Suffering from stress for an extended period of time can lead to eating disorders, gastrointestinal issues, complications with mental health and cardiovascular disease. Besides physical stress, stress can also manifest emotionally in an individual, making him or her easily agitated and leading to avoiding people, experiencing low self-esteem, having difficulty relaxing and feeling a loss of control in one's life. Mental symptoms of stress include chronic worrying, a lack of good judgment, poorly organized thoughts and rapid fire thoughts. Stress symptoms can vary from person to person, since everyone handles stress differently.

Stress - Counselling Services by Singapore Counselling Centre Contrary to what some individuals may feel, stress does not come from events that happen. Rather, stress comes from how we view the events. Have you noticed that some people seem to be able to handle stress better than others, even though they may all be facing the same situation? Deep listening (dadirri) Deep listening explained Aboriginal people passed on stories orally as they knew no writing. Listening to the story teller was vital to reproduce the story accurately to the next generation of story-tellers.

Psychological Stress: Symptoms, Causes, Treatment & Diagnosis Stress. It’s a four-letter word that many of us dread. Whether it’s a tense interaction with a boss or pressure from friends and family, we all face stressful situations from time to time. For some of us, these events happen sporadically. For others, daily stress is a regular part of life. There’s a good chance we can all identify negative stress, but did you know that stress can also be positive?

The Impact of Stress (Bressert S., PhD, for Psych Central) Stress often is accompanied by an array of physical reactions. These symptoms can be characteristic of other physical or mental disorders. A health care professional can rule out other causes after you have undergone a physical examination. Signs of stress can include the following: mental slowness confusion general negative attitudes or thoughts constant worry your mind races at times difficulty concentrating forgetfulness difficulty thinking in a logical sequence the sense that life is overwhelming; you can’t problem-solve Emotional signs of stress include:

New global 'scorecard' to map extent of mental illness crisis A global initiative to measure the extent of mental illness around the world and identify some of the most effective treatments is unveiled in New York on Wednesday. The Countdown Global Mental Health 2030 project is aimed at improving the sketchy data for illnesses like depression and anxiety, and establishing proper metrics so that countries can be compared with one another. A scorecard will be produced every two years, so that the best performing countries can be held up as examples to the rest. The broad aim is to pinpoint successes and failures in treatment and encourage states – and donors – to invest in what works best to deal with illnesses that afflict hundreds of millions of people. “When it comes to mental health, all countries are developing countries,” said Shekhar Saxena, a Harvard professor who is leading the project in conjunction with the World Health Organization, the Lancet and other civil society NGOs. This article is part of a six-month global series on mental health.

Stress, strain and high expectations Most people are under pressure in certain periods of their life. That’s not unnatural. It might be because homework or work have piled up or that you have taken on too many tasks, appointments and duties.

Reiterating the importance to understand what and why we develop a stress response. It is important for young adults to realise what goes on in their heads as well as how they can cope with it by tere_003 Mar 23

Related:
Related:  Mental health   -  Managing Adolescents Stress   -  What is stress and how to manage it effectively