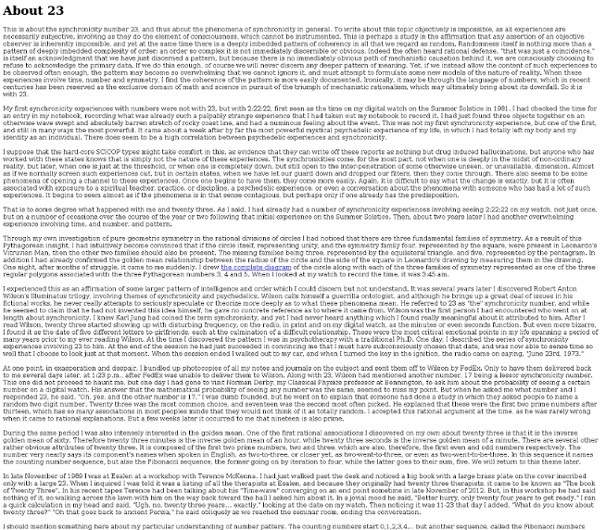 This is about the synchronicity number 23, and thus about the phenomena of synchronicity in general. To write about this topic objectively is impossible, as all experiences are necessarily subjective, involving as they do the element of consciousness, which cannot be instrumented. This is perhaps a study in the affirmation that any assertion of an objective observer is inherently impossible, and yet at the same time there is a deeply imbedded pattern of coherency in all that we regard as random. Randomness itself is nothing more than a pattern of deeply imbedded complexity of order; an order so complex it is not immediately discernible or obvious. Indeed the often heard rational defense, "that was just a coincidence," is itself an acknowledgment that we have just discerned a pattern, but because there is no immediately obvious path of mechanistic causation behind it, we are consciously choosing to refuse to acknowledge the primary data.

Build a Website in 10 Minutes! - StumbleUpon You know I’m a big advocate of simplicity. Simple is great value! When it comes to designing and building websites, taking the short, direct route benefits you in so many ways! You can get a site up and running andÂ test different appeals and content very rapidly today.

Captain America's Red-Faced Nazi And 6 Other Blatant Historical Lies I haven’t seen Captain America yet, but I have confusedly watched the trailer at least a dozen times. It leads me to believe the Nazi war machine was not a horde of Aryan avengers but a swarm of Storm Troopers led by some failed, red-faced experiment. This is not true. I know because I’ve watched at least a dozen History Channel specials on the Third Reich, and never once has the narrator mentioned this. As it seems like pertinent information, I have no choice but to conclude Captain America is outright lying to me.

Thing in a Jar Thing in a Jar 7 inches by 4 inches, mason jar Pictured above is the Thing in a Jar that's usually sitting in my office at work. The coolest thing about the Thing is that everyone responds to seeing it by asking questions. The 20 Awesomest LEGO Art Sculptures LEGO building blocks have been fueling kids' imaginations the world over since 1949. While most of us haven't tinkered around with the classic toy since adolescence, others like Nathan Sawaya have used the tiny plastic blocks to create some truly incredible works of art. All that's missing is a LEGO woman (or Aztec Priest) to reach in and rip it out In the words of the great Arnold Schwarzenegger, "If it bleeds, you can kill it."

True Stores in ONE Sentence.... - Global One TV - StumbleUpon And that's when I looked down and realized my fake nail had somehow caught fire, and no one was around to witness it but my fish. so what? The only year I refused to go to my neighbor's Easter party was the year she dropped dead during the party. Libby As I listened to a conversation between hippies on the 71 bus to Haight Street, I realized that I'm one of the "housies" that they so vehemently spoke of and wondered if I'd be happier as one of them, in grungy overalls, wearing dreads full of clay beads.

7 Fatal Injuries (That People Somehow Survived) Getting Punctured with a Dozen Nails... In Your Brain Alright, so how does a guy top the whole "spike in the brain" thing? Two spikes? How about 12? Skeptical Baby is Skeptical - Not Your Average Easily Convinced Baby (7 Pics) Skeptical baby strikesss!!! Not only this meme is hilarious, but also looks very cute. p.s. I believe we have a winner here, this one definitely stands out as best internet meme to start in 2012. Time Traveler Caught in Museum Photo? “Reopening of the South Fork Bridge after flood in Nov. 1940. 1941 (?)” It’s the short description for the photograph shown at the virtual Bralorne Pioneer Museum, from British Columbia, Canada. The image can be seen specifically on this page (scroll down to the middle), among other items of the online exhibit. Did you notice anything out of place? Or perhaps, out of time? The man with what appears to be very modern sunglasses seems to be wearing a stamped T-shirt with a nice sweater, all the while holding a portable compact camera!

5 Reasons We May Live in a Multiverse The universe we live in may not be the only one out there. In fact, our universe could be just one of an infinite number of universes making up a "multiverse." Though the concept may stretch credulity, there's good physics behind it. And there's not just one way to get to a multiverse — numerous physics theories independently point to such a conclusion. In fact, some experts think the existence of hidden universes is more likely than not.

mental_floss Blog & 11 Pencil Vs. Camera Images - StumbleUpon 986 653Share10.7K Born in Abidjan, Ivory Coast and now living in Belgium, Ben Heine is an amazing artist who overlaps hand-drawn works of art with photos to create stunning images. I selected eleven of his Pencil Vs. Camera images from his site, but you should check out all his awesome work if you have time. Your Costume Jewelry Is Killing You Get thee to Cartier! Michigan-based nonprofit the Ecology Center tested 99 different samples of costume jewelry sold at Claire's, H&M, Forever 21, Walmart, Hot Topic, and Target, among other stores, for lead, cadmium, chromium, nickel, brominated flame retardants, chlorine, mercury, and arsenic. And more than half of the items contained high levels of hazardous chemicals.

Quantum gas goes below absolute zero PHOTOCREO Michal Bednarek/Thinkstock Temperature in a gas can reach below absolute zero thanks to a quirk of quantum physics. It may sound less likely than hell freezing over, but physicists have created an atomic gas with a sub-absolute-zero temperature for the first time1. Their technique opens the door to generating negative-Kelvin materials and new quantum devices, and it could even help to solve a cosmological mystery. Lord Kelvin defined the absolute temperature scale in the mid-1800s in such a way that nothing could be colder than absolute zero. Best of Good Guy Greg Angry Jesus Highdeas Philosoraptor Smoking Bird