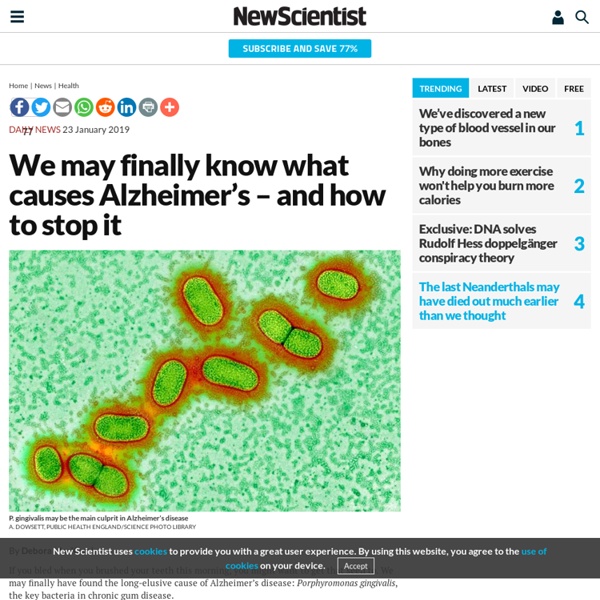 By Debora MacKenzie If you bled when you brushed your teeth this morning, you might want to get that seen to. We may finally have found the long-elusive cause of Alzheimer’s disease: Porphyromonas gingivalis, the key bacteria in chronic gum disease. That’s bad, as gum disease affects around a third of all people. But the good news is that a drug that blocks the main toxins of P. gingivalis is entering major clinical trials this year, and research published today shows it might stop and even reverse Alzheimer’s. Alzheimer’s is one of the biggest mysteries in medicine. Bacteria in the brain The disease often involves the accumulation of proteins called amyloid and tau in the brain, and the leading hypothesis has been that the disease arises from defective control of these two proteins. But research in recent years has revealed that people can have amyloid plaques without having dementia. Gum disease link Cortexyme had previously developed molecules that block gingivains. New treatment hope Related:  Brain • The brain • 02

?kh=-1&uddg= If you are looking forward to your first stiff drink after a dry January, be warned: it may feel bittersweet. You may feel you deserve an alcoholic beverage after toughing it out all month – but have you forgotten what it feels like to wake up haunted by worries about what you said or did the night before? These post-drinking feelings of guilt and stress have come to be known colloquially as “hangxiety”. But what causes them? David Nutt, professor of neuropsychopharmacology at Imperial College, London, is the scientist who was fired in 2009 as the government’s chief drug adviser for saying alcohol is more dangerous than ecstasy and LSD. Alcohol, he says, targets the Gaba (gamma-aminobutyric acid) receptor, which sends chemical messages through the brain and central nervous system to inhibit the activity of nerve cells. The first two drinks lull you into a blissful Gaba-induced state of chill. The body registers this new imbalance in brain chemicals and attempts to put things right.

Staving off dementia when you have mild cognitive impairment The shift from this condition to dementia is not necessarily inevitable. Image: © gradyreese/Getty Images Will I get dementia? That common question takes on urgency if you have mild cognitive impairment (MCI), a slight but noticeable change in memory and thinking skills. What are the causes of MCI? MCI is not dementia (see "What is dementia?") degenerative brain disease, such as Alzheimer's disease (in which case, MCI is often a precursor to dementia) stroke or other vascular disease traumatic brain injury a medication side effect an underlying health problem, such as sleep deprivation, depression, or anxiety. Symptoms There are two kinds of MCI. Amnestic MCI is memory-specific and is marked by signs like forgetting conversations and misplacing items. Non-amnestic MCI involves changes in other brain activities regardless of whether you have memory loss. Prevalence and progression But how long it takes for MCI to progress to dementia is anyone's guess. Staving off dementia Dr. Dr.

Bizarre Discovery Shows Your Bones Could Be Triggering The 'Fight-or-Flight' Response When faced with a threat, hormones flood our bodies in preparation either for battle or a quick escape - what's commonly known as the 'fight-or-flight' response. For decades, we've generally thought this response was driven by hormones such as adrenaline. But it now seems that one of the most important of these messengers could come from a rather unexpected place – our skeleton. We usually think of chemicals like cortisol and adrenaline as the things that get the heart racing and muscles pumping. But the real star player could actually be osteocalcin, a calcium-binding protein produced by our bones. As a response to acute stress, steroids of the glucocorticoid variety are released by the body's endocrine system, where they manage the production of a cascade of other 'get ready to rumble' chemicals throughout various tissues. Researchers from the US, the UK, and India argue there's one tiny problem with this explanation of the fight-or-flight reaction.

What Happens When You Spend a Year Using Science to Improve Your Brain - The Verge - Pocket Illustration James Bareham / The Verge Here are two things that are both true. Neuroplasticity is real — that is, the brain really can change and learn and improve based on experience. And there’s little evidence that brain-training games are any better than placebo. “So,” wondered science journalist Caroline Williams, “if brain training isn’t the way to apply it, what should we be doing?” The Verge spoke to Williams about her expectations, more successful (and failed) experiments, and how to avoid the hype. Photo: Ann Ayerst What was your approach going into these experiments? I went with an open mind. One of the poster children for neuroplasticity are the London taxi drivers, and studies show that as taxi drivers learn to navigate the streets and memorize the routes, the hippocampus — the part of the brain that does spatial navigation — gets larger. Of the three brain areas that are activated when you make sense of place, two of them were normal and one just didn’t respond at all.

The brain's drain: How our brains flush out their waste and toxins By Chelsea Whyte Ji Hoon Ahn and Hyunsoo Cho/Institute for Basic Science Center for Vascular Research, Daejeon, South Korea How does the brain clean itself? We now know a major route for clearing toxins out from the brain, and the finding could help us understand what goes wrong in age-related conditions such as Alzheimer’s disease. Whereabouts cerebrospinal fluid enters and exits the brain has been a long-standing enigma, says Gou Young Koh at the Korea Advanced Institute of Science and Technology in South Korea. However, because of the brain’s complex structure, it remained unclear where the majority of this drainage occurs. Advertisement Age effect To find out which routes the fluid takes, Koh and his colleagues injected dye and tracer quantum dots into the cerebrospinal fluid of mice and then traced where it flowed out of the brain using brain scans. The team found a significant decline in cerebrospinal fluid drainage in the brains of older mice. Toxic proteins More on these topics: brains

Cause of antibiotic resistance identified Scientists have confirmed for the first time that bacteria can change form to avoid being detected by antibiotics in the human body. Studying samples from elderly patients with recurring urinary tract infections, the Newcastle University team used state-of-the art techniques to identify that a bacteria can lose its cell wall—the common target of many groups of antibiotics. The research by the Errington lab which turns on its head current thinking about the bacteria's ability to survive without a cell wall, known as "L-form switching", is published today in Nature Communications. The World Health Organisation has identified antibiotic resistance as one of the biggest threats to global health, food security, and development today. Lead author, Dr. "In this form the body can't easily recognise the bacteria so doesn't attack them—and neither do antibiotics." L-form—flimsy but survives In this L-form the bacteria are flimsy and weaker but some survive, hiding inside the body. Dr. Diagnosis

The Empty Brain - aeon - Pocket No matter how hard they try, brain scientists and cognitive psychologists will never find a copy of Beethoven’s 5th Symphony in the brain – or copies of words, pictures, grammatical rules or any other kinds of environmental stimuli. The human brain isn’t really empty, of course. But it does not contain most of the things people think it does – not even simple things such as ‘memories’. Our shoddy thinking about the brain has deep historical roots, but the invention of computers in the 1940s got us especially confused. To see how vacuous this idea is, consider the brains of babies. A healthy newborn is also equipped with more than a dozen reflexes – ready-made reactions to certain stimuli that are important for its survival. Senses, reflexes and learning mechanisms – this is what we start with, and it is quite a lot, when you think about it. We don’t store words or the rules that tell us how to manipulate them. Humans, on the other hand, do not – never did, never will.

Watch Out for Brain Game Claims Action Points Note that this study was published as an abstract and presented at a conference. These data and conclusions should be considered to be preliminary until published in a peer-reviewed journal. TORONTO -- It's time to hit the reset button on recent headlines about 'brain games' potentially reducing dementia risk. Many media reports missed the mark on a study presented here at the Alzheimer's Association International Conference that suggested a computer game focused on brain processing speed may be able to diminish dementia risk 10 years down the road. The New Yorker wrote that "no brain game ... had ever been shown in a large, randomized trial to prevent dementia. TIME says the study provides "the strongest evidence yet for the power of brain training to reduce the risk of dementia." Surely the 'brain games' industry is hopeful for some positive news after recent negative press. Those companies will get no redemption from these latest findings.