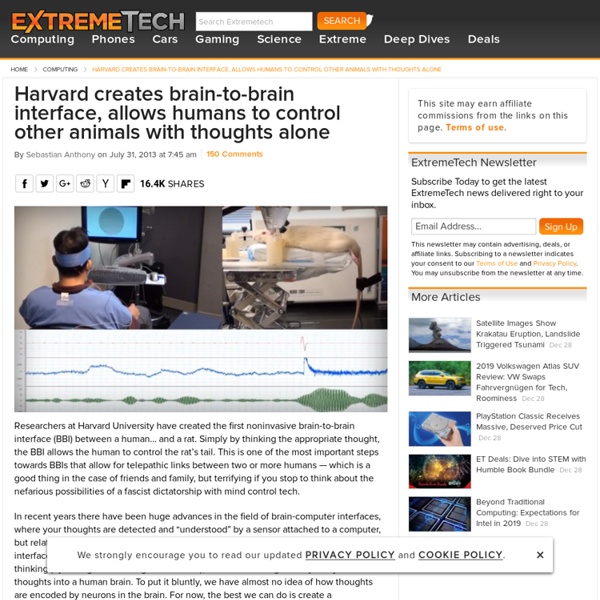 This site may earn affiliate commissions from the links on this page. Terms of use. Researchers at Harvard University have created the first noninvasive brain-to-brain interface (BBI) between a human… and a rat. Simply by thinking the appropriate thought, the BBI allows the human to control the rat’s tail. This is one of the most important steps towards BBIs that allow for telepathic links between two or more humans — which is a good thing in the case of friends and family, but terrifying if you stop to think about the nefarious possibilities of a fascist dictatorship with mind control tech. In recent years there have been huge advances in the field of brain-computer interfaces, where your thoughts are detected and “understood” by a sensor attached to a computer, but relatively little work has been done in the opposite direction (computer-brain interfaces). Which brings us neatly onto Harvard’s human-mouse brain-to-brain interface.

Human Connectome Project  Mapping of the human connectome offers a unique opportunity to understand the complete details of neural connectivity (Sporns et al., 2005, Wedeen et al., 2008, Hagmann et al., 2007). The Human Connectome Project (HCP) is a project to construct a map of the complete structural and functional neural connections in vivo within and across individuals. The HCP represents the first large-scale attempt to collect and share data of a scope and detail sufficient to begin the process of addressing deeply fundamental questions about human connectional anatomy and variation.

Before his death, father of ADHD admitted it was a fictitious disease If you or someone you know has a child that has been diagnosed with attention deficit hyperactivity disorder (ADHD), chances are the child is actually just fine. At least this is what the "father" of ADHD, Leon Eisenberg, would presumably say if he were still alive. On his death bed, this psychiatrist and autism pioneer admitted that ADHD is essentially a "fictitious disease," which means that millions of young children today are being needlessly prescribed severe mind-altering drugs that will set them up for a life of drug addiction and failure. As explained by The Sons of Liberty host Bradlee Dean, who also writes for The D.C. Clothesline, ADHD was merely a theory developed by Eisenberg.

The problem with fMRI iStock On TV and in movies, we’ve all seen doctors stick an X-ray up on the lightbox and play out a dramatic scene: “What’s that dark spot, doctor?” “Hm…” In fraganti: 8 surprising images of the human brain in the midst of activity In fraganti: 8 surprising images of the human brain in the midst of activity / Paradoxically, our body is ours and, at the same time, it is also unknown. Our corporeal selves embody an enigma that has existed since the first moment we recognised ourselves as people and one that will prevail, perhaps, until our final moments; when despite our dreams and the love we feel for life, our body will dictate the end of our existence. If the human body in general, and its functions, remain one of the greatest enigmas for scientific enquiry, at the centre of this perplexity lies the human brain, this complex machinery that without knowing how, keeps us alive and functional. The brain provides conflicts and solutions, it retains our memories and shapes our projects, while it keeps us grounded in the present moment: breathing, making our blood pump, allowing us to see, listen and carry out an endless number of minimal tasks that remain essential: vital.

Alert: imperial psychiatric empire is invading the mind Jon RappoportActivist Post A federal bill, HR 3717, is being refined in the hope of gaining big support from both sides of the political aisle. Rep. Learning To Learn Faster: The One Superpower Everyone Needs I have a new book coming out early next year, The Rise of Superman: Decoding the Science of Ultimate Human Performance. As the title suggests, my subject matter is the outer limits of human potential and the question of what might actually be possible for our species. During the course of writing this book, I’ve been lucky enough to meet a lot of amazing people interested in this very same question. This is a story about one of them, a really nice guy named Jim Kwik. Doctor Who Ran Biowarfare Unit Faces Sentencing Janet PhelanActivist Post Dr. Wouter Basson, who headed up Project Coast, the biological and chemical warfare unit under South Africa’s apartheid government in the 1980s, will face sentencing by the Health Professions Council of South Africa on June 5. Basson (dubbed “Dr.

Should You Stay Put if a Fire Breaks out in Your High Rise? A catastrophic blaze at a London apartment tower has brought new scrutiny to a long-accepted, counterintuitive rule for people in tall buildings: If the blaze breaks out elsewhere in the structure, don't automatically run for the stairs. Stay put and wait for instructions. That's what residents of London's 24-story Grenfell Tower had been told to do, but the strategy failed early Wednesday when flames that began on a lower floor spread shockingly fast and quickly engulfed the entire building. Many residents were trapped, forcing some on higher floors to jump to their deaths rather than face the flames or throw their children to bystanders below. So far, at least 30 people have been reported dead and about 70 people were missing.

W.H.O. says it's okay for drug companies to conduct medical experiments on Ebola patients - NaturalNews.com (NaturalNews) A panel of World Health Organization "ethicists" has declared it is ethically acceptable for drug companies to run medical experiments on Ebola victims. "The WHO panel unanimously concluded that it is ethical to offer medications to fight the Ebola virus, even if their effectiveness or adverse effects are unknown," reports CNN. (1) This is a fascinating decision because it immediately reveals the huge contradiction found in western medicine. According to proponents of vaccines and medications, such treatments are "evidence-based medicine" because they've all been clinically proven to be safe and effective, we're told. But now, when people are dying of Ebola, suddenly all that gets thrown out the window. Who needs proven safety and effectiveness when there's "faith" in an experimental serum or vaccine?