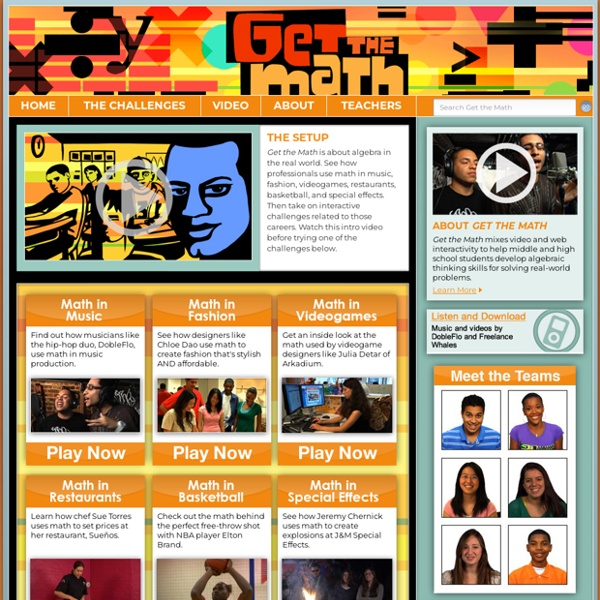 8 math talks to blow your mind Mathematics gets down to work in these talks, breathing life and logic into everyday problems. Prepare for math puzzlers both solved and unsolvable, and even some still waiting for solutions. Ron Eglash: The fractals at the heart of African designs When Ron Eglash first saw an aerial photo of an African village, he couldn’t rest until he knew — were the fractals in the layout of the village a coincidence, or were the forces of mathematics and culture colliding in unexpected ways? Here, he tells of his travels around the continent in search of an answer. How big is infinity? There are more whole numbers than there are even numbers … right? Foldables/Study Guides Lose a foldable? All foldables & study guides that we have made in class are available below. If you need help filling in the blanks, please see the completed foldable or study guide in the classroom. Remember, many of these files were copied back-to-back, so a two-page file is the front and back of the foldable. 6th Grade Adding and Subtracting Fractions and Mixed Numbers (PDF 11 KB)Four-door foldable for operations with fractions. 6th Grade Multiplying and Dividing Fractions and Mixed Numbers (PDF 12 KB)Four-door foldable for operations with fractions.

Amazing Mathematical Object Factory AMOF, the Amazing Mathematical Object Factory, shown on the left, produces lists of mathematical objects in response to customer orders. Today you are a customer and you must tell AMOF what you want produced. This factory is totally non-polluting and the objects produced are absolutely free! (There is a vicious rumour however, that the workers are underpaid and overworked.) Click on a icon with an Indigo background, such as , to learn about that object, or on an icon with a Green background, such as

cell phone project Project K-Nect is designed to create a supplemental resource for secondary at-risk students to focus on increasing their math skills through a common and popular technology – mobile smartphones. Ninth graders in several public schools in the State of North Carolina received smartphones to access supplemental math content aligned with their teachers’ lesson plans and course objectives. Students communicate and collaborate with each other and access tutors outside of the school day to help them master math skills and knowledge. The smartphones and service are free of charge to the students and their schools due to a grant provided by Qualcomm, as part of its Wireless Reach™ initiative.

graph: xy = –12 x Image InputX Upload an image from your computer: Enter a URL for an image: Terms | Privacy Quick Guide to the Common Core: Key Common Core Expectations Explained - Mathematics - Vander Ark on Innovation Guest blog by Kathy Kellman, executive editor of mathematics at Curriculum Associates Note: This is part two of a two-part series. Last week, my colleague Adam Berkin wrote the first part in this series, " Quick Guide to the Common Core: Key Common Core Expectations Explained " for the English Language Arts standards. A lot of people (including some educators) have a lot of anxiety about math: How do we teach it? Web 2.0 Tools for Math Educators By Laura Turner This is a continuing series on Web2.0 and other web-based tools for educators. This information is specific to math educators, but there is some crossover into science. Math educators will find a large number of useable interactive companion web sites for the teaching of math concepts and skills.

Percentage Calculator A percentage is also a way to express the relation between two numbers as a fraction of 100. In other words, the percentage tells us how one number relates to another. If we know that number A is 25% of number B, we know that A to B is like 25 is to 100, or, after one more transformation, like 1 to 4, i.e., A is four times smaller than B. This is what the percentage calculator teaches; what is a percentage and how to find a percentage of two numbers. It is essential and practical knowledge. A Quick Puzzle to Test Your Problem Solving The answer was extremely basic. The rule was simply: Each number must be larger than the one before it. 5, 10, 20 satisfies the rule, as does 1, 2, 3 and -17, 14.6, 845. Children in kindergarten can understand this rule. But most people start off with the incorrect assumption that if we’re asking them to solve a problem, it must be a somewhat tricky problem. They come up with a theory for what the answer is, like: Each number is double the previous number. And then they make a classic psychological mistake.

Fun Kids Online Math Games "Sheppard offers everything from early math to pre-algebra. The lessons include interactive activities to practice concepts. Students can shoot fruit, pop balloons, and even play math man (the math version of pac man!). VmGhana These are in approximate chronological order of publication starting with Bharati Krsna’s groundbreaking book. Vedic mathematics Or Sixteen Simple Mathematical Formulae from the Vedas. The original introduction to Vedic Mathematics. 10 Useful Math Practice Apps for Elementary Students April 4, 2015 Looking for some good iPad apps to help elementary students with their Math? The list below features some of the most popular iPad apps in this category. These apps have been endorsed by a larger base of teachers and educators and are ideal for classroom inclusion.

History of Fractions Did you know that fractions as we use them today didn't exist in Europe until the 17th century? In fact, at first, fractions weren't even thought of as numbers in their own right at all, just a way of comparing whole numbers with each other. Who first used fractions? Were they always written in the same way?

This website shows videos and applications of math in real world situations. It could be used when introducing a new topic during classroom instruction. by reneejernigan Apr 22