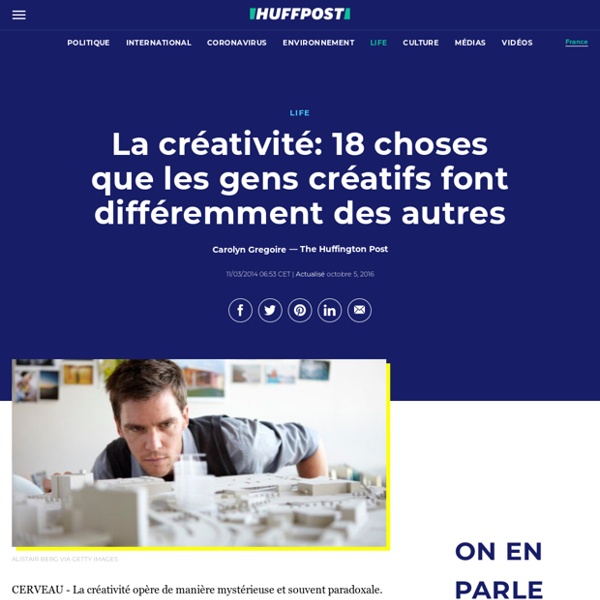 Electric Objects: A Computer Made for Art by Electric Objects There's more art on the Internet than in every gallery and museum on Earth. But many of these beautiful objects are trapped. They’re trapped inside of devices like our phones, our tablets, our TVs, our laptops — devices designed for distraction, living between texts, tweets, football games and emails from work. So we wanted to make a new way to bring art from the Internet into your home. EO1 is designed to fade into the background, like a photograph or painting. It becomes a part of your home, affording you the chance to enjoy the Internet at a slower, more considered pace. FlipBooKit - Mechanical Flipbook Art and Kit by shinymind A NEW (old fashioned) Art Format Flipbookit.net is from kinetic artists, Mark Rosen and Wendy Marvel. They create moving art that tells stories and tickles our sense of nostalgia.

Basecamp organiser son foyer Basecamp is more than just a project management tool — it’s an elevated way to work. Teams that switch to Basecamp become better teams. They’re more productive and better organized. They communicate better and require fewer meetings. "Creativity is not a team sport": Interview Vincent Walsh, Prof Neuroscience UCL - Improvides Today’s interview makes me feel quite honoured. It’s with Prof Vincent Walsh of UCL, one of the world’s preeminent cognitive neuroscientists with a strong interest in the study of creativity. Here we talk about how your brain generates ideas, how you’re aware of less than 1% of your brain’s activity, and the science which shows that creativity is not a team sport.

Levels of Evidence - Evidence Based Medicine - Research and Subject Guides at University of Illinois at Chicago Is All Evidence C reated Equal? The medical literature is immense, but only a small portion of it is immediately useful in answering clinical questions. The literature reports the whole spectrum of the scientific research process -- the long journey from in-vitro studies to double-blind randomized controlled trials. Discover Fine Art Woodcut: The oldest printmaking technique, woodcut involves carving an image into a wooden surface, which is then inked and printed—leaving the carved-out image in negative, as well as occasional traces of the wood’s grain. Linocut: A more modern analog to woodcut, linocuts are made using linoleum; the softness of the material allows for cleaner, freer, and more fluid lines. Etching: To create an etching, artists incise (“draw”) a composition onto a wax-coated metal plate, then soak the entire plate in acid.

Graffiti Research Lab The United States of America is going out of business! But here at the U.S. Department of Homeland Graffiti, we want to turn this moment of national embarrassment and hard times into real savings for you and your family. From June 4th through the 28th, the U.S.D.H.G and the Graffiti Research Lab are liquidating all confiscated, high-tech graffiti artifacts and tools, expunged evidence, court exhibits, redacted documents and office furnishings, priced to sell. Cultivating innovation at work Can you pay people to innovate? Companies increasingly look to knowledge workers to advance new strategies, products, services, and processes, but making it happen is tricky: Dangling financial rewards can actually prove counterproductive. Behavioral research points to ways to effectively kindle employees’ motivation to innovate. Any garage band worth its salt knows the odds of becoming rock stars are against it.

How To Write an “About Me” Page That Gets You Hired About pages are hard. You have one page to summarize who you are, what you do, and how you’re different in a clear, concise, and confident way. No big deal! Serotonin map of brain could lead to better targeted antidepressants Research that aims to map the activity of serotonin in the brain could revolutionise the use of antidepressants and behavioural therapy for people with mental illnesses. The neurotransmitter serotonin has long been associated with mood, with drugs that boost the chemical in the brain helping to alleviate the symptoms of common illnesses such as depression and anxiety, but scientists lack a deep understanding of how it mediates different mood disorders. By understanding the biology of serotonin, the hope is that drugs can be created that only target cells relevant to a particular disorder and behavioural therapies can be made more effective, reducing the need for antidepressants. Dr Jeremiah Cohen, an assistant professor at the Johns Hopkins Brain Science Institute in Baltimore, said: “The ultimate aim is to understand the biology of mood and how groups of cells in the brain connect to produce our emotional behaviour.